Tenganan Village Center in Bali: the future value hidden in a traditional village Architecture is built for the future. But not everyone actually sees the future value inside a traditional village. The future value of traditional villages is way more important as it directly contributes to a sense of place and connection to the past. In this case, Bali, which is attached to traditional values, also sees their traditional villages as essential, as it carries the timeless identity of a region. Bali is located in the south part of Indonesia's archipelago. Bali, which is known as the "Paradise on Earth" and "Thousand Temples" due to cultural authenticity, must also maintain its title as "World-Class Tourism" simultaneously to keep the economy running. Due to globalization, high-paced tourism development, lifestyle changes, and denaturalization, Bali inevitably faces threats and challenges in sustaining its identity.

Tenganan Pegringsingan is one of the oldest Balinese villages that still survives today. Before 1970, many anthropologists considered Tenganan is one of the most isolated and secluded societies. However, in 2015, Tenganan went through some village development promoted by the local government to shift from a traditional village into a tourism village. The change then raises problems ranging from spatial problems such as accessibility and connectivity to village identity. To overcome the existing problem, the author used the fundamental Balinese traditional philosophy, Tri Hita Karana, as the source of inspiration for the proposed renewal strategy. It emphasizes that man should achieve three balance and harmony in life to achieve happiness (Harmony with God, Man, and Nature). The proposed building is designed to represent its era. It intended to revive the local architecture, not to compete with the indigenous one but more to showcase how the idea from the past will interact with today's human advancement and innovation. The following describes 3 design strategies.

Verticality (man and Gods)
The vertical conception refers to the intangible relation between man below and God above. The selected site is an 8800 square meters parking lot in the southernmost of the village. Before 2016, this site was a village's leftover space (forest). The site's irregular shape weakens the linearity and the "street concept" that characterizes Tenganan village. That is why the author's initial intention is to emphasize the existing street. Like other Balinese villages, the north part of this village has higher ground, and it is believed more sacred by locals compared to the south part. Thus, preserving the village street also maintains the narrative and connection between the two areas (sacred-less sacred, old-new, past-present). As an outcome, the new building arrangement feels monotonous, but it exhibits a respectful attitude toward context. It also contributes to reviving the village's central axis, which is a sacred feature in Balinese village.

Horizontality (man and man)
The horizontal conception refers to harmony among people on an equal basis. These strategies were initiated to respond to problems detected from space syntax simulation that shows that the third zone has the most unconnected and unintegrated streets among the three existed village zones. The problem is aligned with the site investigation result that villagers living in the first and second zones received much more visitors and income than the villager in the third zone. Since the intervention site occupies the middle zone, connecting the first and third zones becomes vital to overcoming the socio-economic gap. Therefore, the design tries to resolve it by proposing a traversable building that triggers visitor movement to the quieter zone.

Naturality (man and nature)
As tourism development surged in 2016, the paved parking area wiped out an existing local forest. That is why there is an eagerness to bring back greenery in particular areas. Nature is also present through natural materials that dominate the building (thatched roof, wood, and stone). Besides greenery, the main building's composition is inspired by a traditional Balinese gate. People commonly recognize the surrounding forested mountains as a village border. Therefore this perception still isolates human activity from nature itself. While this design intentionally put a gate-like structure near the border in the hope that people would sense the forest as an explorable place rather than a boundary. Thus, dialog with nature can occur.

Tenganan Village Activity Center and The Homestay. Tenganan's traditional public building inspires the design of the activity center. It has various functions: gallery, theatre, classrooms, workshop space, and curator offices. The building is displayed as a stacked prism with a dynamic twist on top to contrast with surrounding orderliness. The gate-like composition is arranged to highlight the temple complex near the site along with its forest background. The main structure mainly uses steel, that suitable for the space requirements. For the upper space, it adopts a bridge-like structure and truss to ensure its strength. The homestay adopts the Tenganan house layout. The first floor is designed with open-air concept and is occupied by locals, while the visitor occupies the 2nd floor. The building mainly uses laminated timber and steel joinery. Only the service area (bathroom and kitchen) is maintained using a concrete floor and waterproof panels. All the new proposed buildings are designed with a tropical approach in mind. It also follows the concept of "Clarity of Structure" and "Truth of Material." It aims to show an honest building that exposes the structure and material as it is without any hidden structures or repainted materials. In the outcome, the clarity of the joinery between the steel and the wood, the glass and the natural stone, the polycarbonate, and the thatched roof, will become part of the aesthetic language. 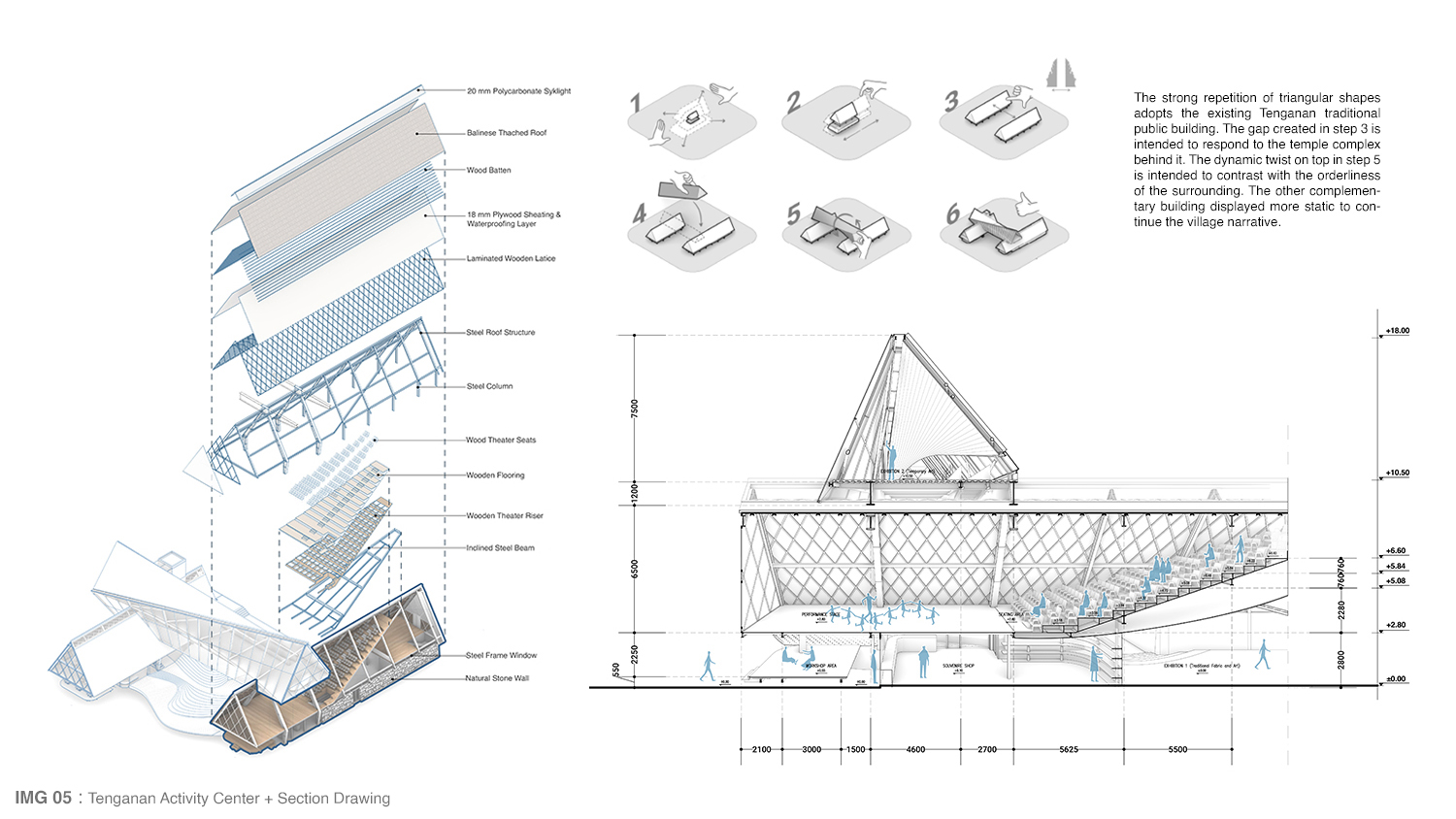 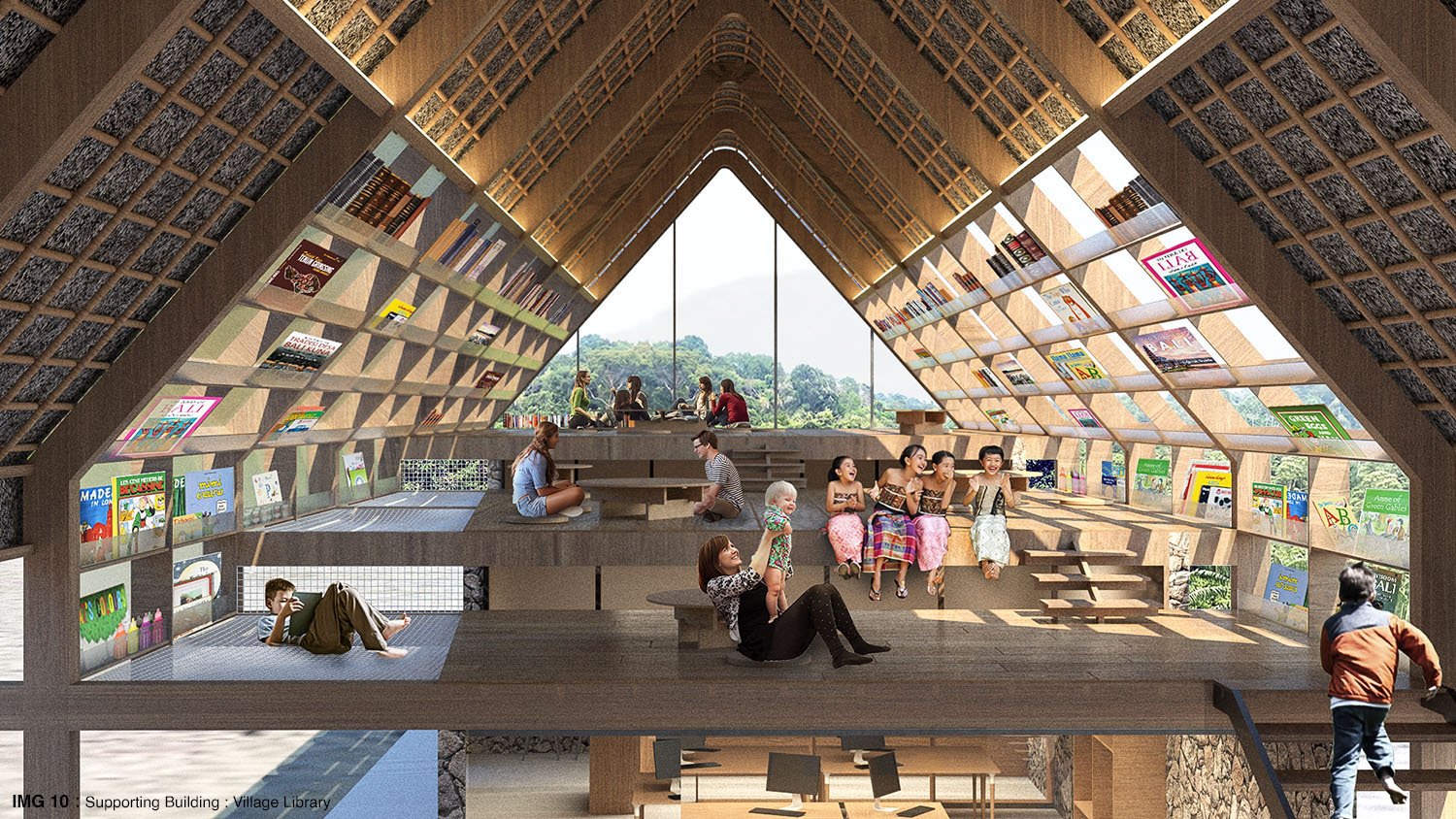