Town planning decision: the project is developed according to the area and the current parameters.

General information
The land is located in the central part of the city of Svilengrad - PI 65677.701.1545 of the town of Svilengrad, quarter 46, UPI XXVI, according to the city's zoning plan. In the neighborhood there is a park and a square with the city library. Nearby is the 500-year-old Svilengrad Bridge on the Maritsa River, restored and entirely pedestrian. The situation suggests working in a historical context. Here passes the ancient Roman road "Via Diagonalis", connecting the central European part of the Roman Empire with Constantinople. To this day, it is one of the most important and busy transport corridors for people and goods between Europe and the Orient.

Car access and parking: car parking within the property is not required. At ground level within the boundaries of the property are provided: 5 parking spaces for disabled people, parking for 30 bicycles, access and maneuvering space for waste removal and loading vehicles.

Pedestrian access: pedestrian access to the building of the future museum is in accordance with the pedestrian flows in the adjacent area. The aim is to combine the new museum building with the existing significant architectural volumes, parks and open spaces.

Park environment: reconstruction of the existing park has been done, including a lapidarium, a new center of the park, in the form of a Byzantine cross and a statue of a horse, symbolizing the Bulgarian ambition and country. The alley network was designed based on the idea of Roman town planning.

Functional relationships and spatial transformation:
- Transformability of the functional areas in the building and the possibility to restructure the spaces according to the different events
- Ability to shape "spaces within spaces"
- Additionally, technical rooms, a children's corner, a panoramic cafe, an interactive hall and a multifunctional hall have been designed and planned. The multifunctional hall was developed based on the geometry of the existing bridge (one of the symbols of Svilengrad) built in the 15th century.

Volume and spatial solution: a ground floor with an atrium and 2 floors with a structural height of 4m are being developed. The building is in a corner plot and is drawn on the regulation line. It is fully in line with the silhouette plans. 2 underground floors with a reduced height (2.5 m) for glass and service area have also been designed.

Exposure: due to its rectangular shape and requirements for passive lighting, each facade has been developed independently. Simulated motion of the sun was studied, obeying the basic laws of light propagation and refraction and through different media and materials. The change of its position during the different seasons is also taken into account. Constant natural passive side lighting during working hours is achieved. For this purpose, the main directions and the position of each facade were used (details). At the same time, with this solution, the problem with the orientation for the installation of solar panels, oriented and installed on the concrete elements, is solved. The area of the building suitable for the installation of solar panels is increased many times, in addition to the sun protection, 3 more facades can be used without the northern one, i.e. approximately 2000sq.m. suitable areas for installation of solar panels, which roughly makes a small solar farm sufficient to provide the energy of the building itself for both heating and ventilation, with enough surplus to power several neighboring buildings. The triangular elements of the facade are buffer zones - in the triangle, with a suitable combination of glass units, an additional zone of air would be obtained, which in itself is an insulator, i.e. a relatively constant microclimate will be achieved in the completed building.

Materials: reinforced concrete, polished concrete and/or stamped concrete, limestone, stone, wood. The provided materials are based on concrete - sanded and stamped. As an accent for the construction of the stairs, limestone is planned, the central Roman cross in the atrium of the building is planned to be made of stone, like the roads made in ancient times. The most special part is the constant natural facade passive lighting, due to the observance of the basic laws of optics and the theory of light propagation. 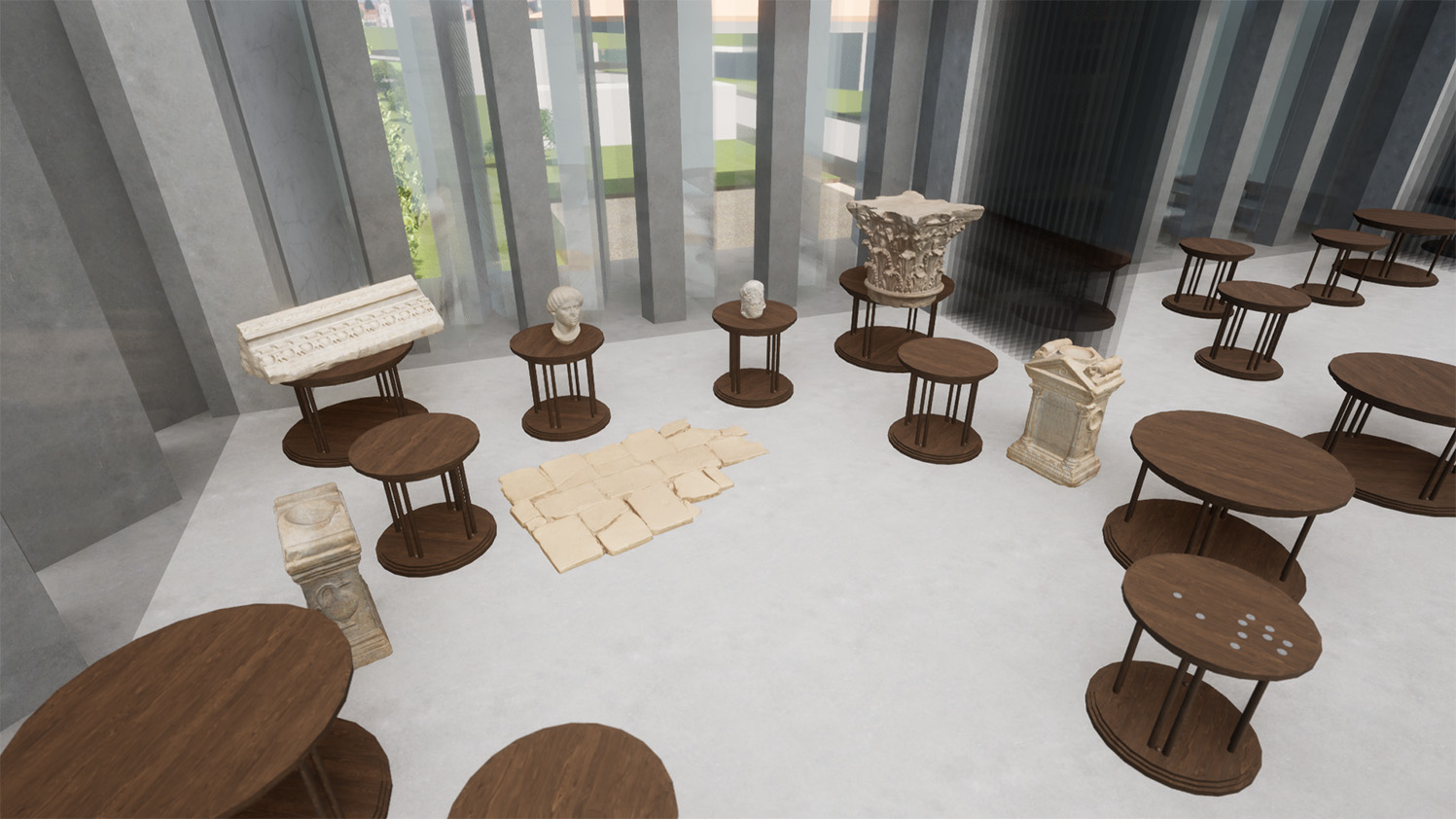 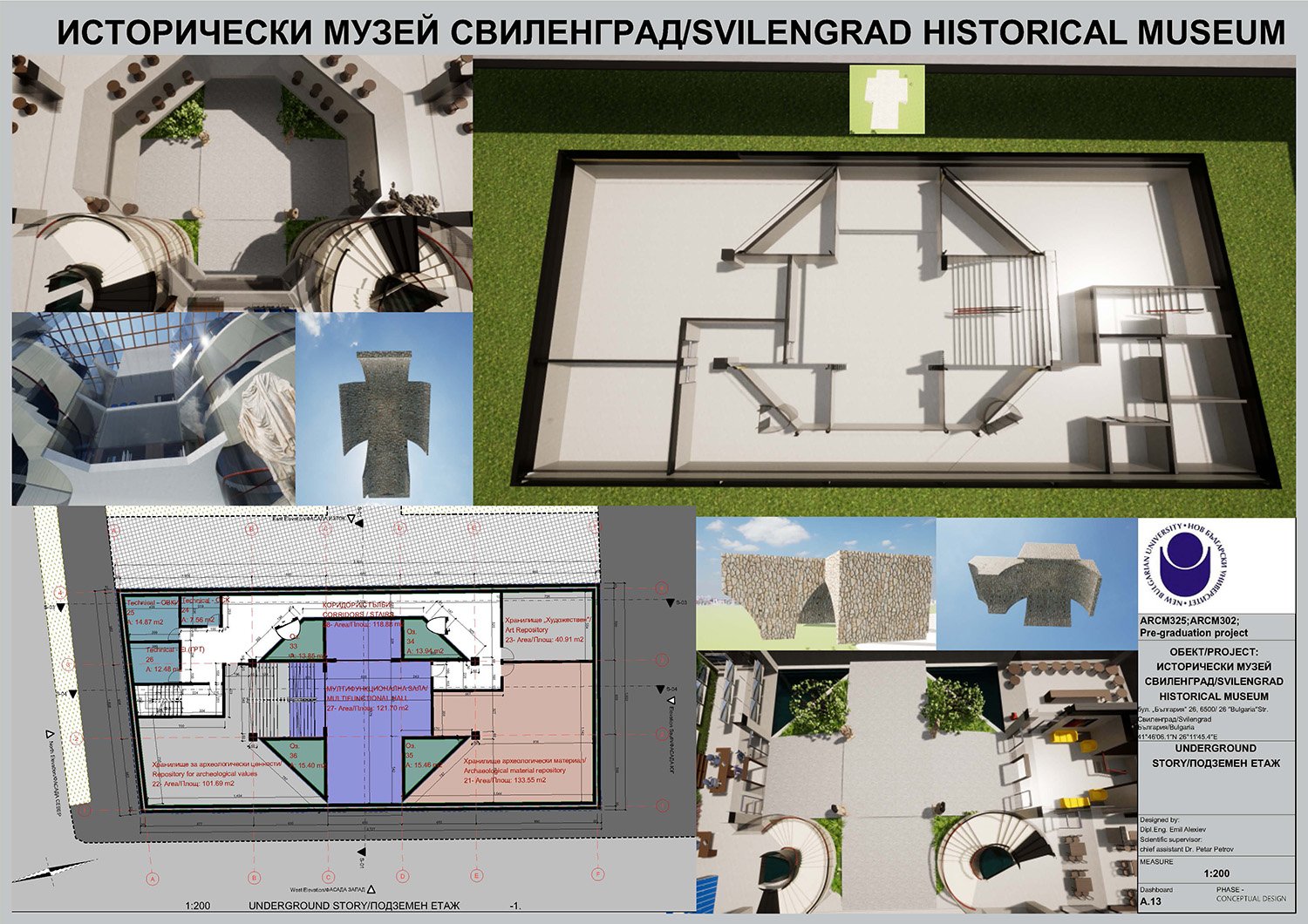 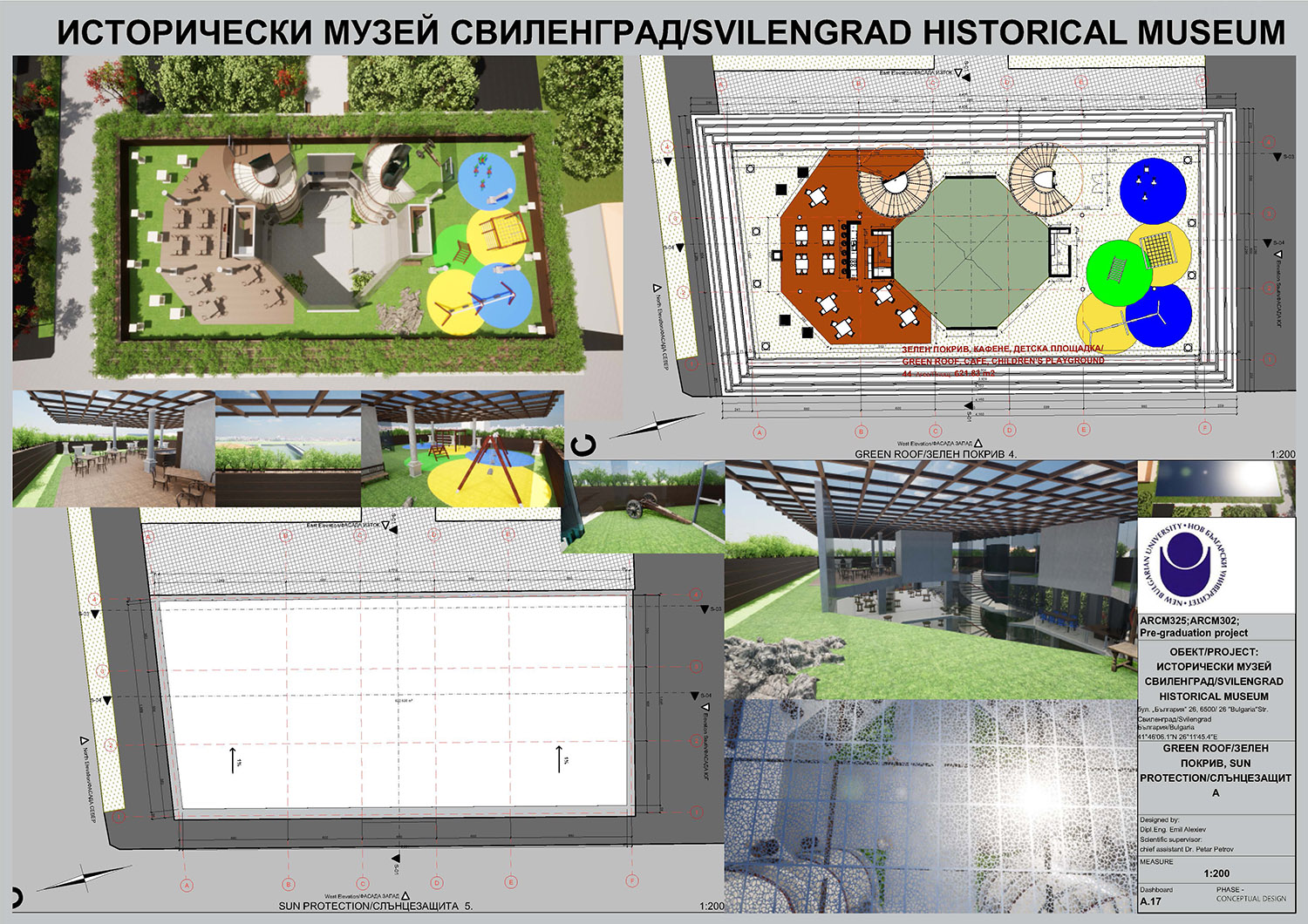 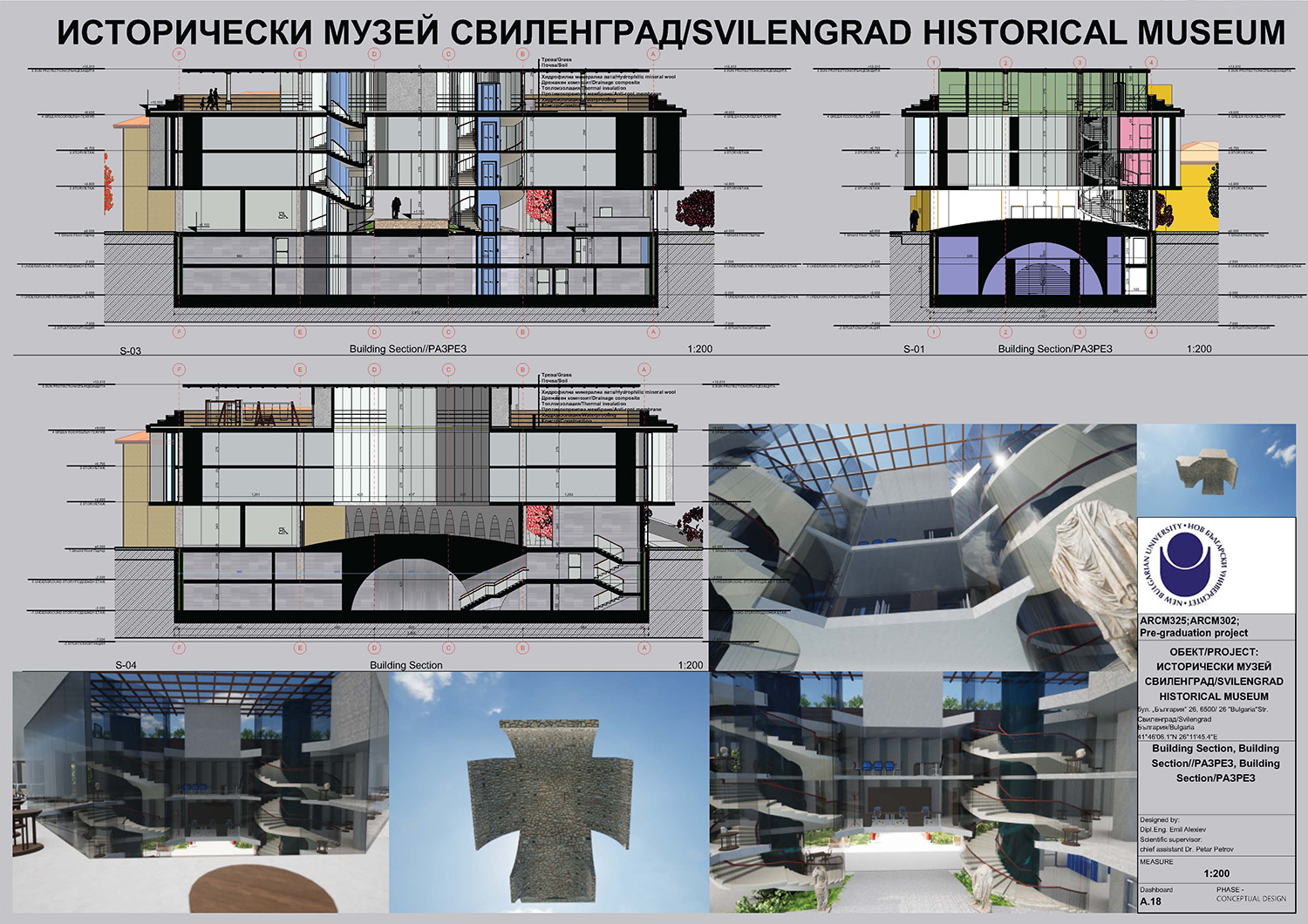 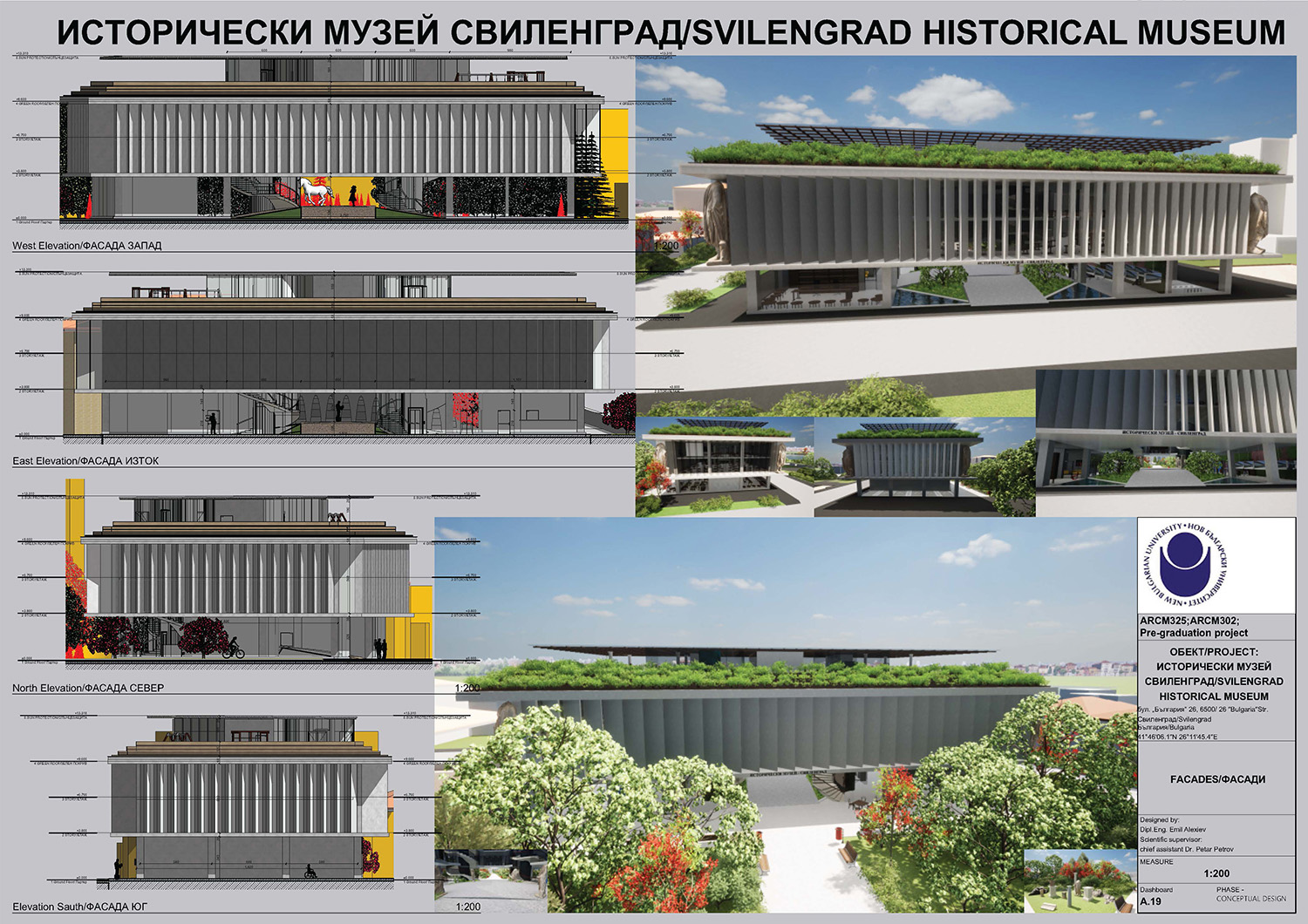