Axis Activa: the regeneration of a public space in Podgorica Podgorica as a city in the Balkans felt the effects of the peninsula’s turbulent past, and being in the centre-point of the collision of the eastern and western cultures left a deep rupture in the continuity of architectural expression within the city. The clash of different paradigms left todays Podgorica, a city of just more than 180 000 inhabitants polycentric, without clear relations between different parts. This master’s thesis aims to analyse the different historical and morphological layers that make up Podgorica in order to trace the systems of public spaces and their mutual communications, in an attempt to sort them into a proposition of a larger binding system. This system, designated as axis activa, has been used as a starting point for establishing a new order for the uncontrolled and perspectiveless growth of the city, and giving the city a long overdue essence to its otherwise troubled existence. In the second stage, urban regeneration project has been proposed for the current supposed centre-point of Podgorica – Trg Nezavisnosti square. The project encompases restructuring and urban design of public space as well as architectural (re)design of representational public programs on the square by connecting existing city council and library buildings with a new hybrid addition.

Problem description
The turbulent events of the XVIII and XIX century left a serious mark in Podgorica’s urban morphogenesis. The city began as a Turkish oriental town, only to be taken into the state of Montenegro after the Berlin congress in 1878. Prince Nikola of Montenegro, in an effort to make this a new centre-point of the now internationally recognised state, ordered a new city to be built beside the old one, abandoning the oriental Mediterranean concept for a new – European city of the 19th century. His vision of an orthogonal centre divided in blocks soon began existing next to the old town, which contrary to all beliefs was not abandoned. Both were bombarded to ruin in the Second World War, and after the communist government came to power in 1946, they did the same thing as Prince Nikola, turning a blind eye towards the old centre, and spreading the city even further, across the Morača river, building it in the style of socialist modernism. Multiple complex urban plans and competitions were drafted and held in order to try and establish a much-needed link for these seemingly disconnected agglomerations, but none came to fruition, be it due to the lack of finances, or the general lack of will and courage from the authorities to do what is necessary to transform the city.

Thesis objectives
The aim of the thesis is to gather and analyse the historic circumstances and urban development of the city in order to extract individual layers, points and trajectories and make sense of how the city functions. It will reverse-engineer the broken ”arteries and veins” of the city in order to retrace their mutual links and assemble a functioning system. Hence forth, the system would be utilized to maximum efficiency, in order to strengthen both the existing public areas and communications, andpropose new public micro-ambientes in the process. The thorough analysis will also identify previous attempts at this subject and list the reasons of their failures so not to repeat them.

Project brief description
The key activity which would initiate the establishment of Axis Active, which aims at the overall regeneration of the public space of Podgorica, is the reconstruction of existing facilities of the town library “Radosav Ljumović” and the Municipal Assembly which are located on the main town square (Independence Square). Independence Square in Podgorica has already been recognized as inadequate and was the subject of numerous reconstructions. The main issues of this space are its disconnection from all town elements and town events, as well as the absence of programs taking place there or near it, which it would be directly connected to. Along with the evident need for its reconstruction, the reason we are initiating the idea Axis Active, is hidden in the essential idea of each square. More precisely, a square, especially the main one in the town, should be the hotspot of public life, the purpose of traveling and the meeting point. Such space has the greatest potential to generate ambitious vision such as Axis Active. On the other hand, through the idea Axis Active, we are bringing the square closer to the town, including it in the system and putting it at its center. The main town square is located within Nova (Mirkova) Varoš, which represents the third out of the five zones of Axis Active. This zone, though further development, is envisaged as a system of public squares, which would represent the core of the town center. Squares are located in the middle field of the orthogonal matrix Nova (Mirkova) Varoš. The pedestrian road stretches from the north side of the squares, where along its entire length is developed the hospitality and commercial content. While the pedestrian and driving road, or the “shared space” stretches from the south side of the squares. The subject of further development of this design will be the reconstruction of two facilities on the main town square, the facility of the town library “Radosav Ljumović” and the facility of the Municipal Assembly, with the aim of activating the square and creating conditions for the establishment of Axis Active. The reconstruction with superstructure was principally selected due to sustainability, because it concerns the facilities of good standing, and due to their function which carries the urban potential. 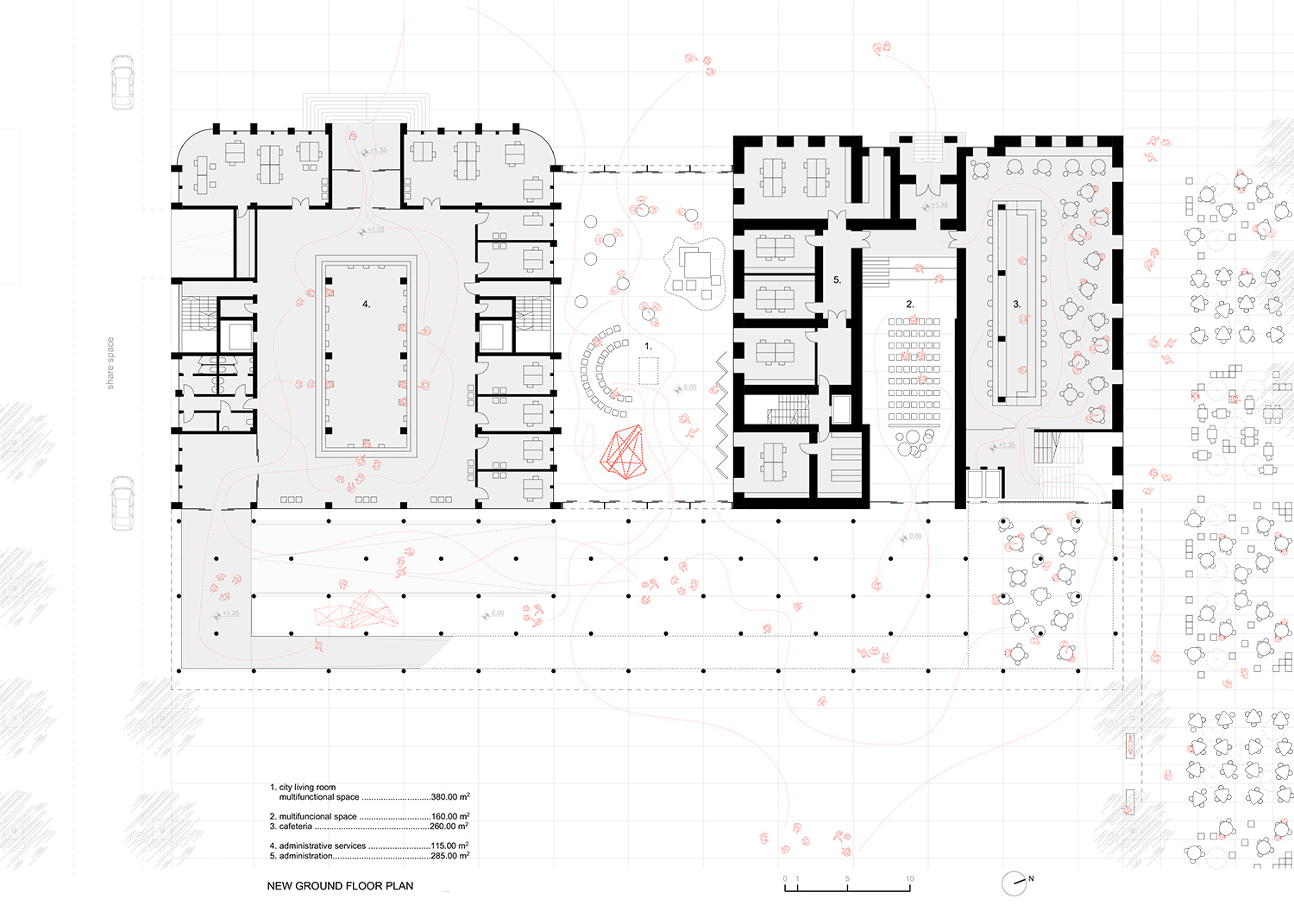