Serendipity: an enquiry about the contemporary role of dams The dam is one of the symbols of the modern era. A manifestation of progress, made tangible and visible by the huge effort of building these structures. It represents the utopia of a tamed nature, bound to obey mankind. But can this utopia face its own entropy? The project is a research on dams, the end of their lifecycle and their questionable relationship with the environment, particularly when they no longer hold any practical function.

The Ondenon dam (La Ricamarie, France) is a case study to elaborate an attitude towards these industrial artifacts: unless they gain social importance through reappropriation of space, they are not worth keeping. While re-establishing the course of the river, the intervention also finds a new meaning in the dam’s ruin, seeking its value in the landscape without cancelling every trace of it. The river restoration stabilizes the sediments through hexagonal steel elements that encourage meandering and slow down the water. The opportunity to create a space that would have never existed otherwise, that holds within the memory of the dam’s past and the vision of the future, justifies the name Serendipity. A ruin is not a symbol of decline. Ruins preserve the memory, forever linking it to a place. In terms of methodology, I first researched the geological conformation of the Saint Etienne - Firminy valley, to understand the behaviour of the case study watershed. With mostly granitic rocks, I was dealing with small rivers that ran towards the elongated valley in a parallel drainage pattern, while their torrential course made their flow to be seasonal and irregular. The irregularity of river flow can lead, in case of strong rains, to dam overflooding, which is globally recognised as the major cause of dam failure.

In my case study, the river past the dam was already causing flooding in inhabited areas, and the hazard creep of the dam led to the conclusion that a dam failure would have devastating consequences. Moreover, the dam taken into consideration is not in use, neither for a hydroelectric powerplant, due to its dimensions (only 32 m in height) nor for collecting drinking water, as the acqueduct and filtering collectors are connected to other dams in the area. My proposal was to empty the dam basin through the canal at the base of the dam, re-establish the natural course of the river while graduallyrevitalising the dead soil, and finally give the residents of La Ricamarie a proximity recrational area that would withhold the industrial past of the valley.

Phase 1
The dam, a gravity arched dam, is to be emptied and partially deconstructed, removing the central part in a way that does not let the massive stone and earth filling collapse, following the angle of repose and proposing anchoring and a covering reinforced net. Through this hole, the river was allowed to flow freely towards the valley, while the dam itself acquired the aspect of a ruin, such as the Malpasset dam, or the Gleno dam, both collapsed and now immersed in nature. The dam becomes the guardian of a protected space.

Phase 2
The major problem of dam removal, as projects such as the Elwha dam removal in the US have demonstrated, are the river sediments. Considering again the geology of the site, an approximate calculation can be made to deduce the amount of sediment accumulated behind the dam after 100 years of existence: the opening of the dam must be done according to sediment height over the previous soil level. In the case study, hard rock produce little to no sediment, but a stratus of 5-10 m was considered. The purpose of intervening on the dam basin is to ensure that sediments are not carried away too quickly, given the proximity of houses, and to establish a regular river flow that can slow down torrential rain in order to prevent flooding in the valley. This can be achieved with a system of dynamic balance that positions sheet piling elements into the soil, following nature's principles on angles and forces and flow equilibrium: the project proposes several sheet piling elements distributed in the dam basin following a hexagon-like grid of 120° and 60° angles, like snowflakes, basalt columns, pinecones. The tension ensures a regular, non resisting flow. With time, sheet piles can either be removed or left in the soil. Once the sediments are stabilized local plants can be re-introduced, starting with leguminous plants, whose abilities to enrich the soil with nitrogen and oxygen is key to revitalise a soil that has been underwater for 100 years. Over the course of 5 years, trees would be able to grow, over 10 years, no human maintenance should be needed.

Phase 3
The space of the basin is conceived as accessible, as it is located within a National Park with trails and paths. The project takes the japanese practice of shinrin-yoku, forest bathing, as principle to characterise the space: to experience the place is to walk through it and see its wonders. With its east-west orientation, the basin is divided in 3: a sunny side, south exposed, a darker side, north exposed, and a central, flat area, where sheel piles and sediments create a microclimate and microhabitat of their own. The filling of the deconstructed dam is used to create rocky and gravel paths, which accompanies the roamer. First, the southern side, dark and humid, conceived to enhance the immersion in the forest; then the valley, where trees are less frequent, the sun shines through and the sound of the river soothes the ears; finally, the northern side, sunny, bright, open to the view. From every point within the basin, the dam is visible, silent, like the ruin of an ancient industrial temple.

The project turns a difficult situation into an opportunity, acknowledging the complexity of the problem and finding a place-based solution. 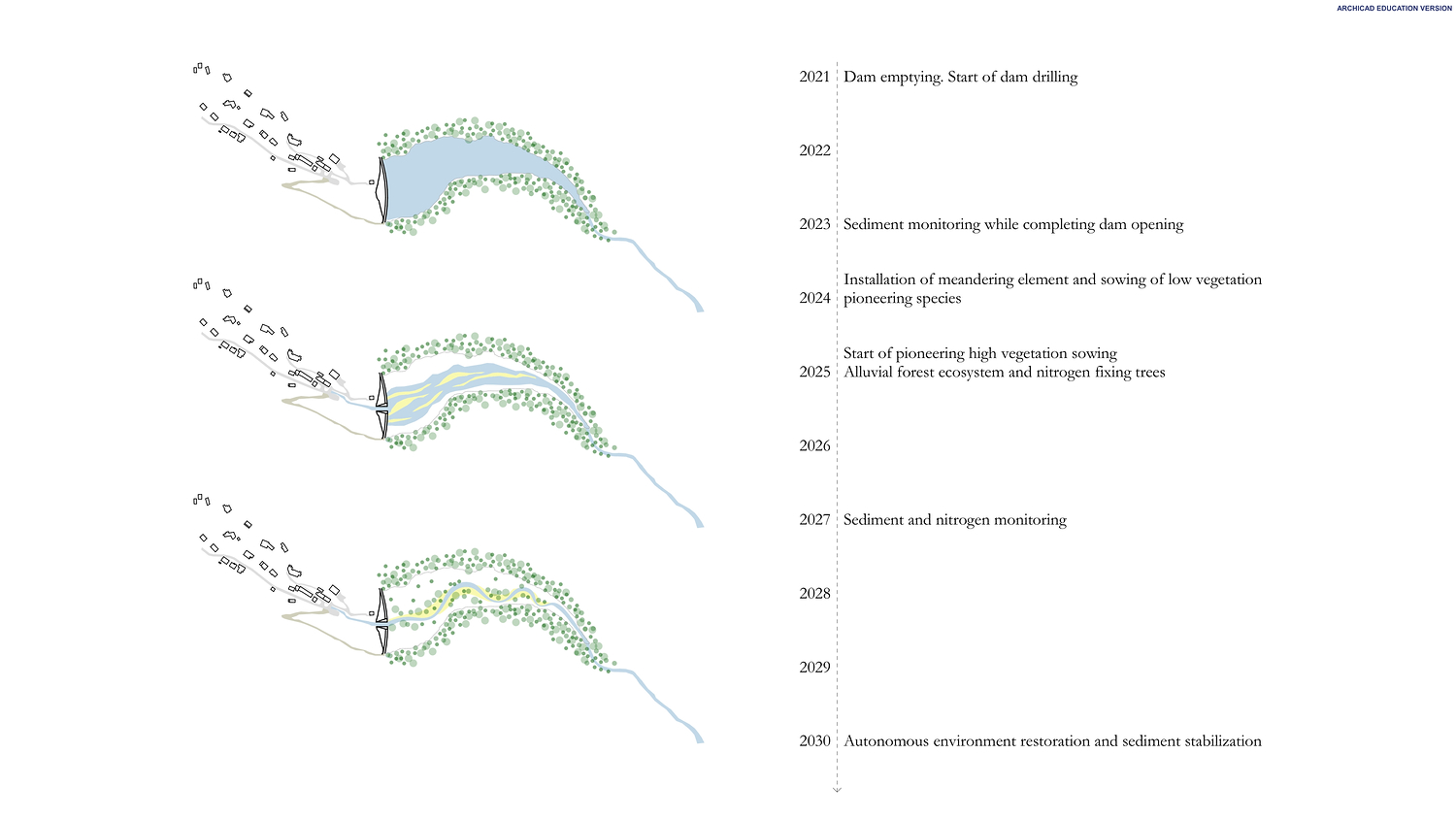 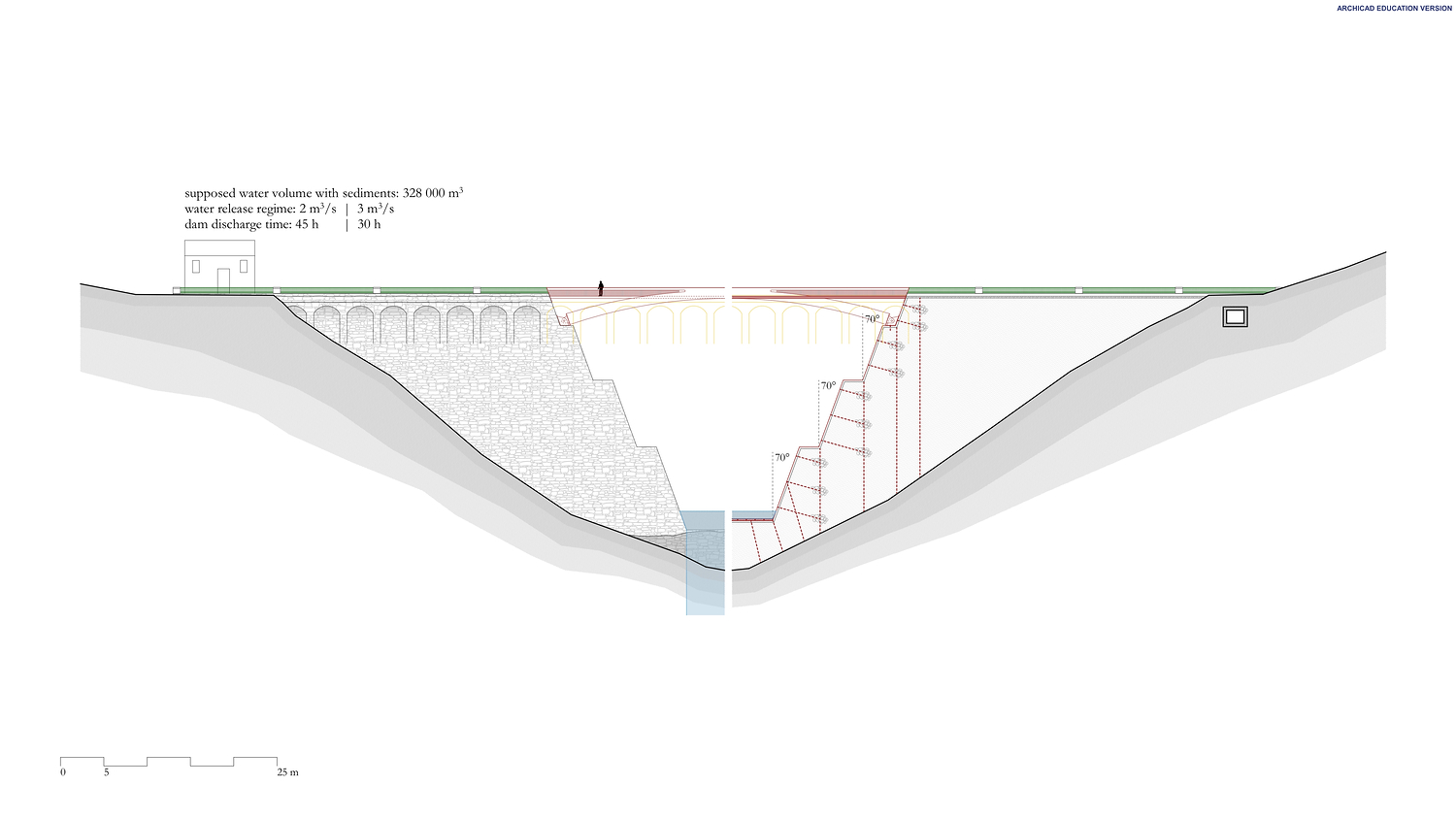 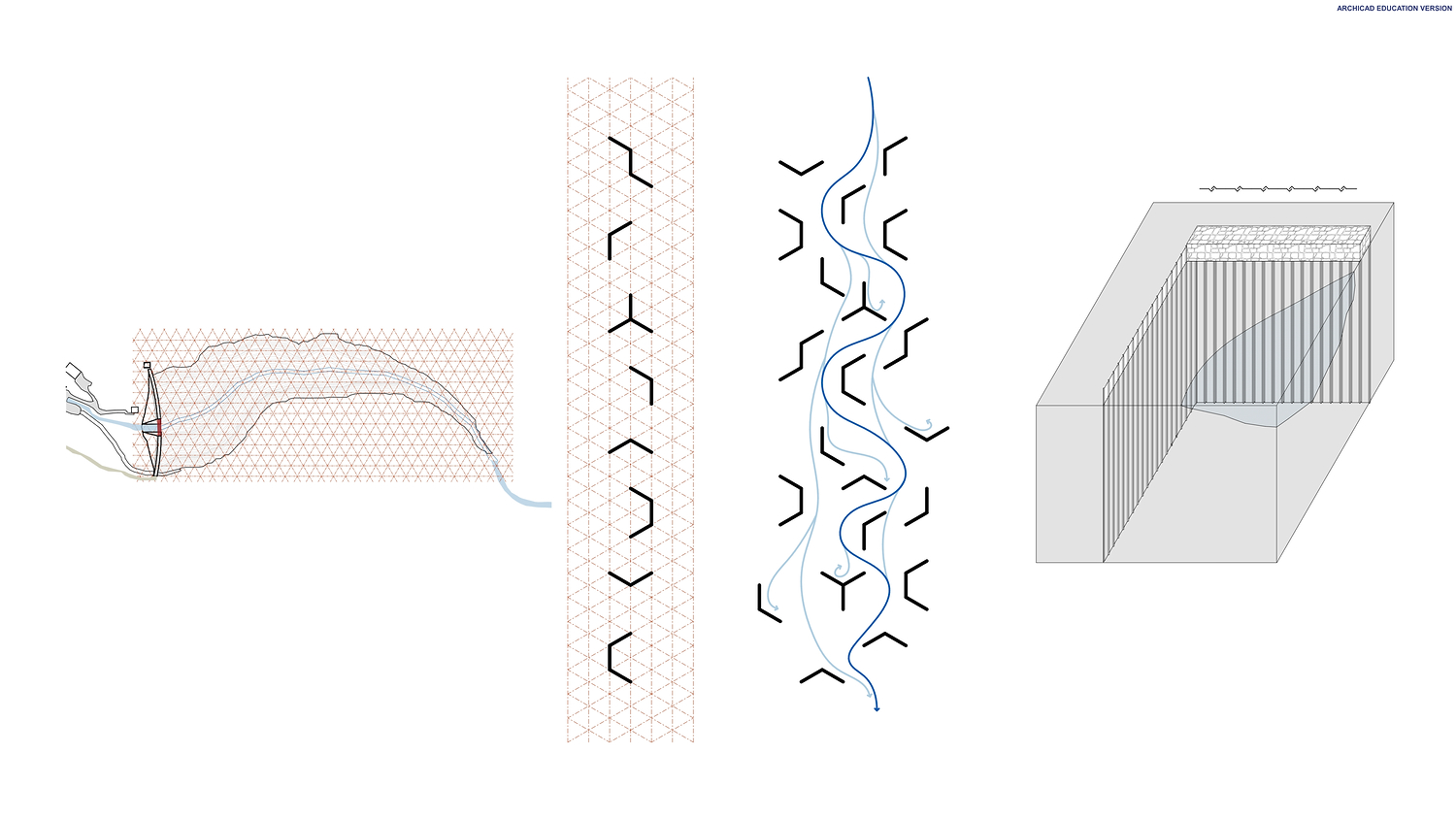 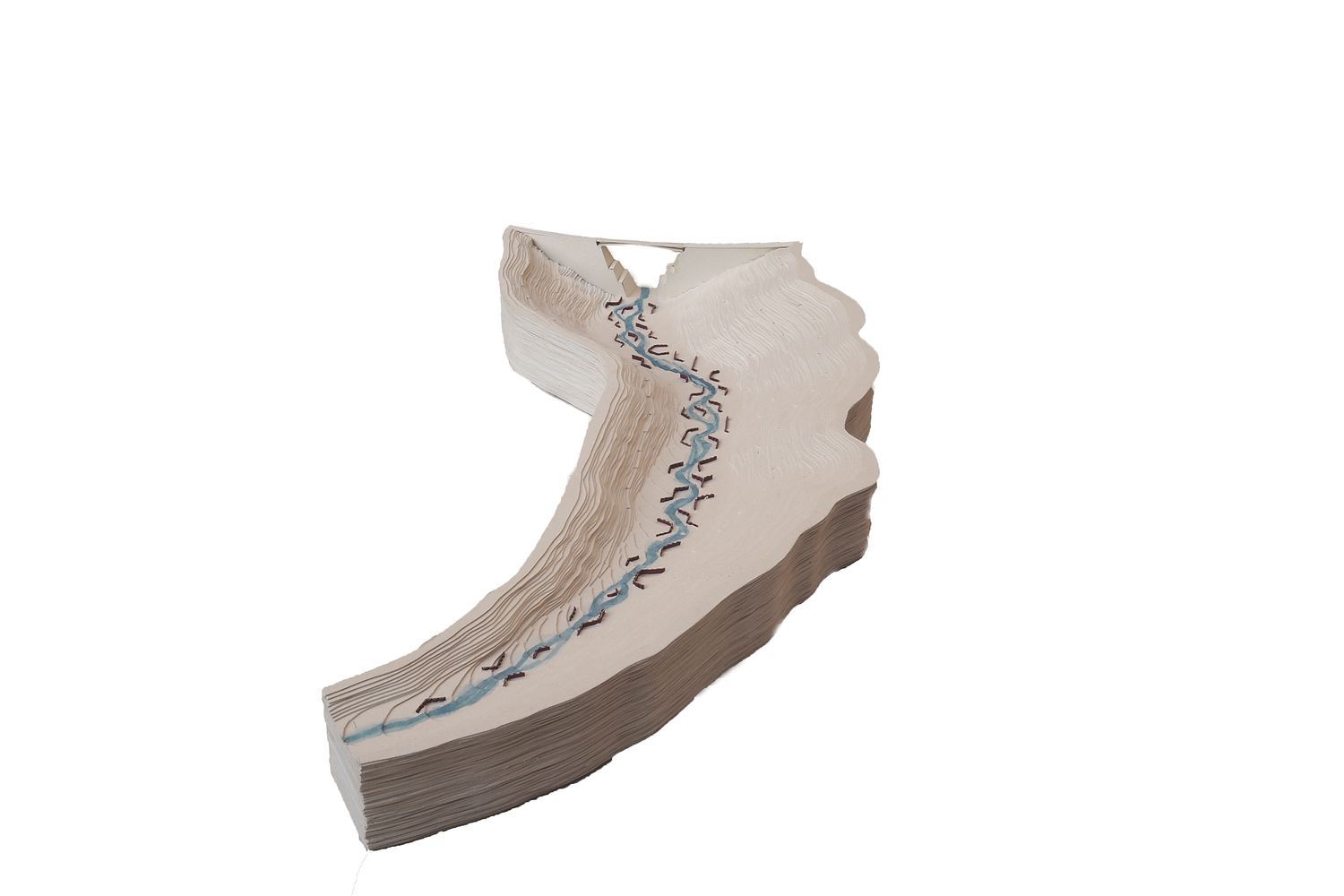