This research thesis explores a series of reflections on the themes of Architecture and Music, which have always accompanied human history, and in my specific case have always been two great passions; in this thesis I have tried to understand and transform into a project the intrinsic relationship between these two disciplines. The natural "architectural" outcome of this thesis was to design a theatre, a modern, flexible space that responds to new needs and requirements, capable of creating connections between the public space and the population. The choice of the project city was Barcelona, a modern metropolis linked to its history and architecture, where the relationship between architecture and music is well expressed.

The project site is located on one of the city's most important thoroughfares, Avinguda del Paralel, nicknamed the "Broadway of Barcelona", the city's most important entertainment and leisure street. Among the many theatres and music halls on this street, attention fell on the Teatre Arnau, an important historical building in the city, which has been closed for almost two decades in precarious condition. The theoretical part on which the project is based has dealt with the experiences of two musicians and two architects and with four works, two musical and two architectural, and more generally with the space of music; the relationship between Iannis Xenakis and Le Corbusier, Luigi Nono and Renzo Piano, the work of Richard Wagner and the Bauhaus theatre and Oskar Schlemmer.

As mentioned, the project will be developed in the Teatre Arnau lot, in the Avinguda Paralel. This axis is not only fundamental for its infrastructural importance leading from the sea (Placa de les Drassanes) to the inner city (Placa Espanya), but also from a social and cultural point of view. In fact, it is considered the city's street of entertainment, and in the Parallel there are numerous theatres and clubs, much of Barcelona's nightlife since its construction at the end of the 19th century. In Avinguda del Paral-lel there is therefore a series of buildings that refer to the main theme of Architecture and Music, as well as the old Teatre Arnau, the site where I decided to design my hypothesis, that of the construction of a new Arnau theatre, a new space for music and the performing arts capable of grafting itself into the urban fabric as a new social condenser together with the other theatres and spaces of Parallel.

The NOU ARNAU project was born with the objective of creating a relationship between the theatre space as a place of staging and the environment that encompasses it, which is always dialectical and multiform, and above all is never a neutral relationship. The first idea I came up with, after researching design references, was to create a theatre with several spaces and environments; therefore, not a single hall with a horizontal atrium-lounge-services area, but a theatre with a vertical development in which the various environments contaminate each other. This design choice also stemmed from a technical requirement, namely the small size of the Arnau site, an area of just under 800 square metres. Because of this "limit", I decided to create a series of boxes with various geometric shapes, each with a different function, and to "disperse" them in the space of the lot, connecting them with each other thanks to a series of stairs and ramps. As far as the music rooms are concerned, I decided to start from the definition of a seven-storey high scenic tower (two underground and five above ground) that serves the main hall, which morphologically can be defined as a section of a trapezium that narrows on one side.

The second box, smaller than the previous one and rotated by 180 degrees, houses more functions, including the double-height foyer overlooking the Raquel Meller square and the stage of the secondary hall, more suitable for comedy and cabaret. Acoustically, the main hall has a shape that narrows on one side, which helps the sound to propagate properly and reach every seat. The walls are completely covered in wood, a material with great acoustic properties, and curved panels are hung from the ceiling to reflect the sound waves and "send" them towards the audience, which can be positioned by a system of cables according to the number of people and the type of performance. The secondary auditorium is designed as an open-air theatre, a terrace overlooking the city which can be closed if necessary by means of a mobile roofing system connected to the façade.

One of the most important spaces in the building is definitely the atrium. As it faces the square I wanted to create a free space with a tribune in the background; a place that can be used for multiple functions by the community: a presentation, a screening, a meeting, a rally, a party, an event, a performance. The grandstand and the atrium, in which there is a bar, ticket office and fitting room, become the core of the theatre; not being covered by any ceiling, the central space is enveloped by a series of staircases and walkways that can serve as spaces for the public should the entrance be used for any event. The complexity of the articulation of the internal spaces of the halls and those of the connecting elements give the whole theatre the capacity to be comprehensible but at the same time complex in its architecture. The idea of creating a multi-layered space is then identified with the outer skin made up of modules of brise soleil panels opening onto the public space of the context, at some points becoming a pergola that leans against the street. The steel skeleton on which the modules are inserted is flexible both in its installation and in the possibility of being independent. 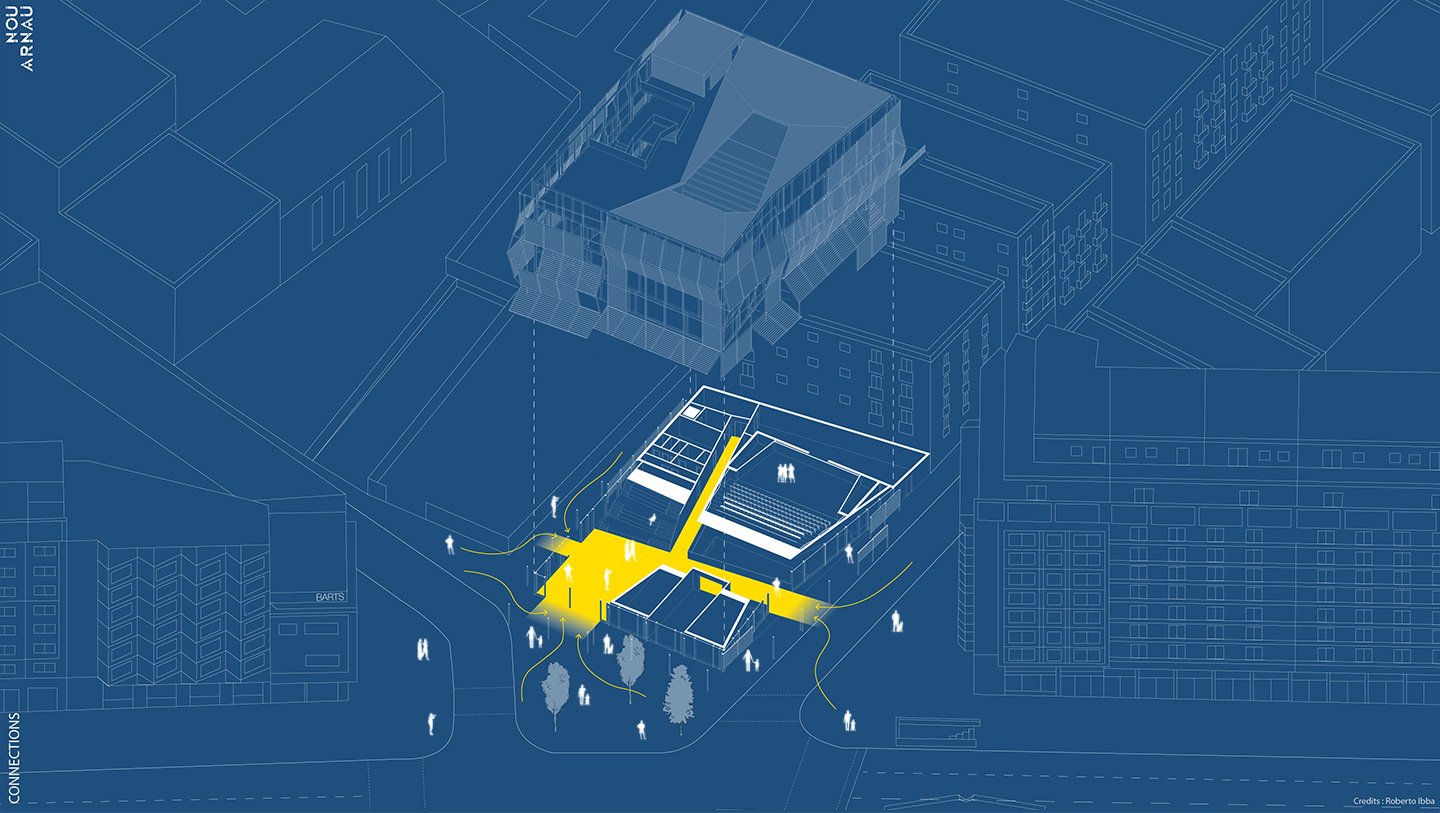 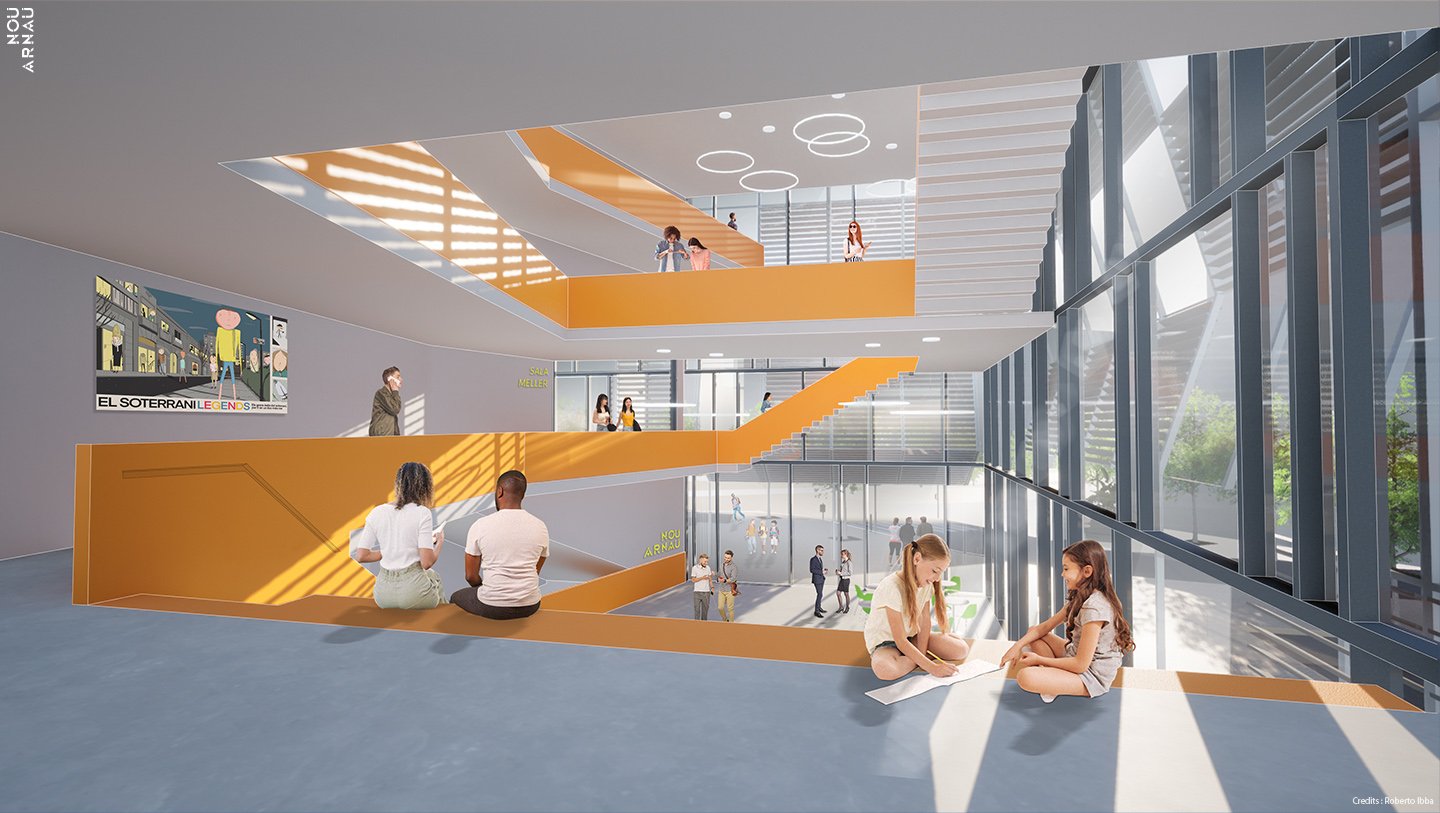 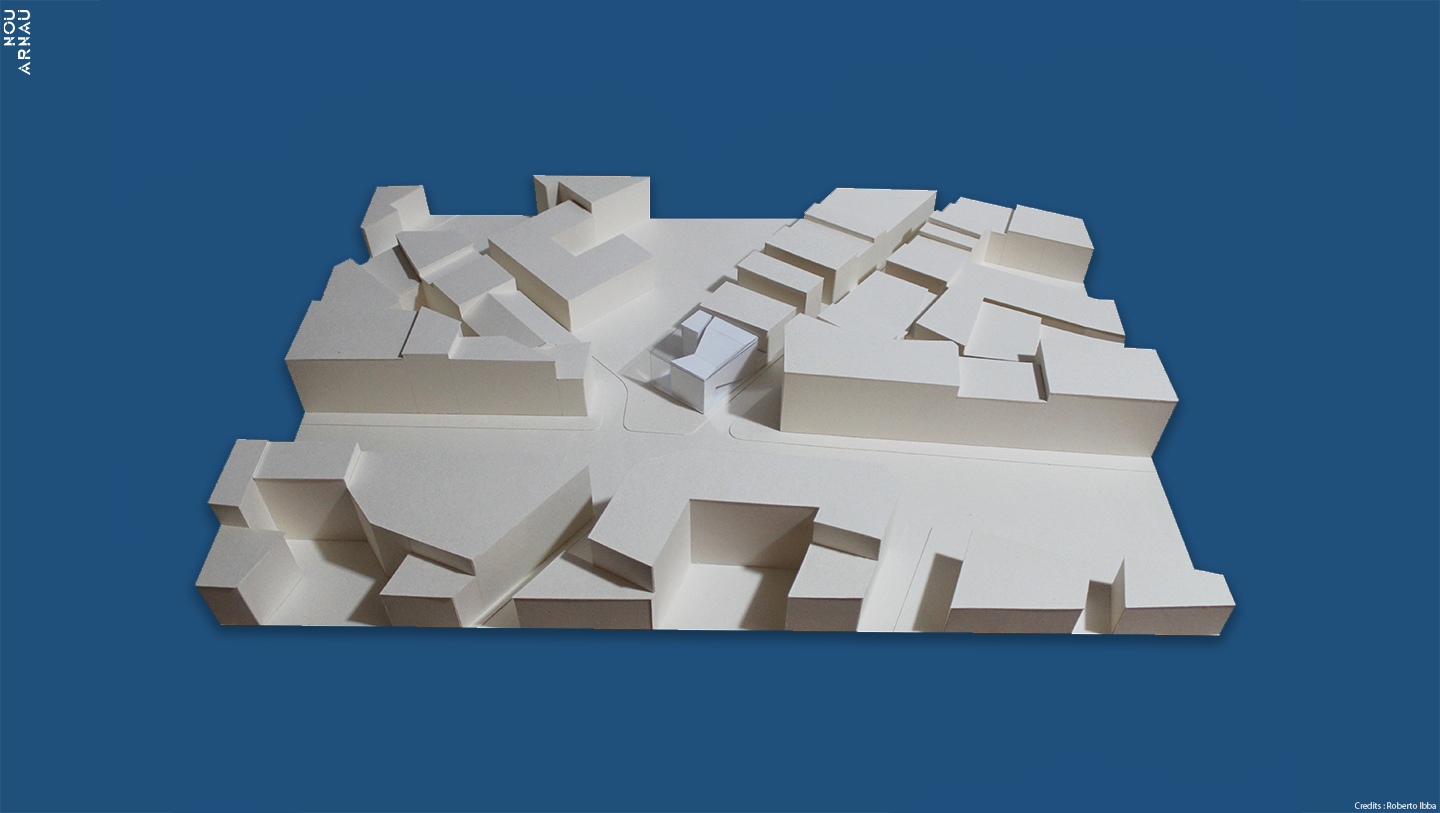