Jian Mu Tower, a new kind of skyscraper where natural and artificial overlap The Jian Mu Tower, designed by CRA-Carlo Ratti Associati, is an office tower in China, whose façade features a vertical hydroponic farm extending the entire height of the building. The building, located in the southern Chinese city of Shenzhen, introduces a new kind of skyscraper where the natural and the artificial closely overlap. The tower’s design makes it possible for the building’s tenants to cultivate, purchase and consume fresh vegetables and fruits directly inside the tower. Jian Mu Tower was conceived to occupy the last plot available in Shenzhen’s Central Business District, which would complete the skyline of the area’s central axis. The 218-meter high tower dedicates 10,000 square meters of space on its façade to the cultivation of crops. The vertical hydroponic farm will produce an estimated 270,000 kilograms of food per year. Jian Mu Tower establishes a self-sustained food supply chain, encompassing the cultivation, harvest, sales and consumption of crops, all inside the same building. In addition, the tower will house offices, a supermarket, and a food court. The name of the tower is derived from the mythical symbol of the “jian mu tree” which, in ancient Chinese folklore, connects heaven and earth. According to traditional belief, heaven is round while the earth is square. The skyscraper echoes this principle with its rectangular base that gradually morphs into a tubular form as it rises. The tower offers 90,000 square meters of space across 51 levels. Working with ZERO, an Italian-based company that specializes in innovative approaches to agriculture, the tower’s farm is optimized to produce everything from salad greens to fruits to aromatic herbs, while remaining efficient and sustainable. An AI-supported “virtual agronomist” is tasked with the farm’s day-to-day operations, managing irrigation, nutritional conditions, and other matters. Apart from the vertical farm, the building’s natural and artificial elements work alongside one another in many other ways. On the tower’s outside, a series of landscape terraces cultivate a wide variety of flora including water lily, fern and lychee. These terraces promote biodiversity and take advantage of Shenzhen’s abundant precipitation in their sustainable irrigation system. In addition, the office workers inside Jian Mu Tower are able to utilize the inner gardens for relaxation and social interaction. The gardens themselves are double-height and seamlessly integrated into the interior spaces, allowing tenants to feel immersed in a natural setting. The prominence of greenery on the building’s surface effectively reduces solar irradiance in indoor areas and the need for air conditioning – thus lowering energy consumption. Furthermore, workers can use a mobile app to customize the micro-climatic conditions of their offices. 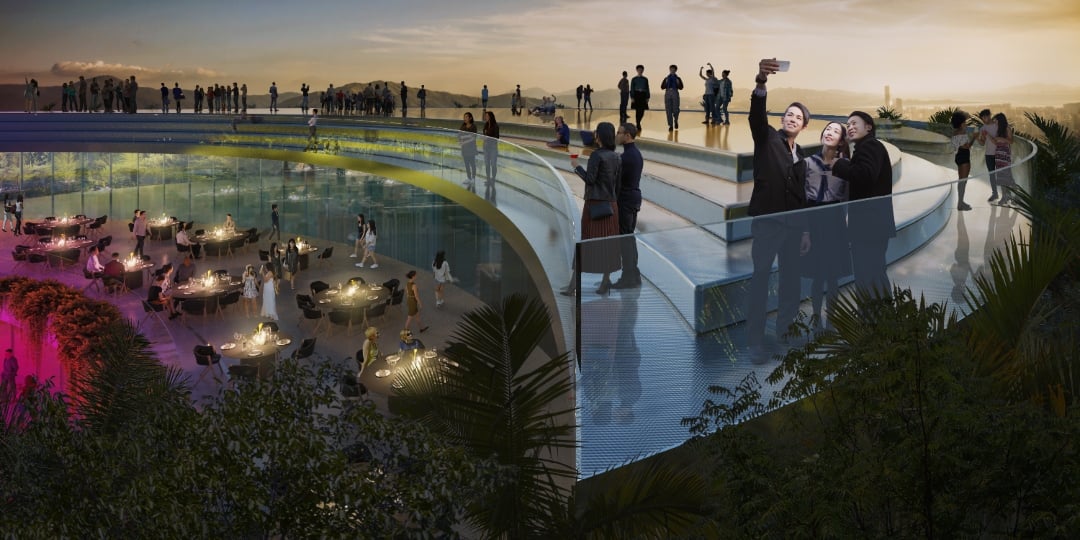 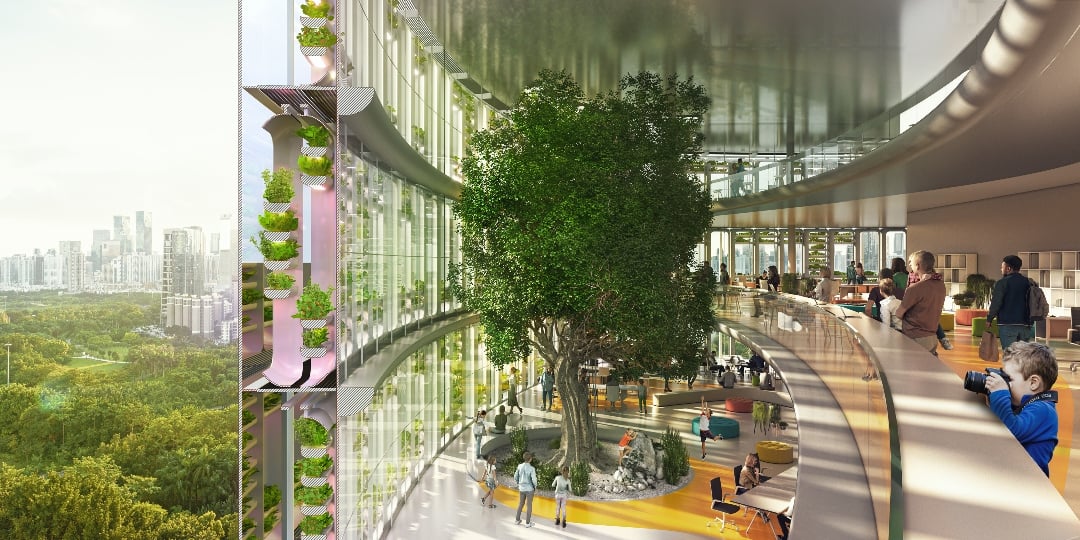 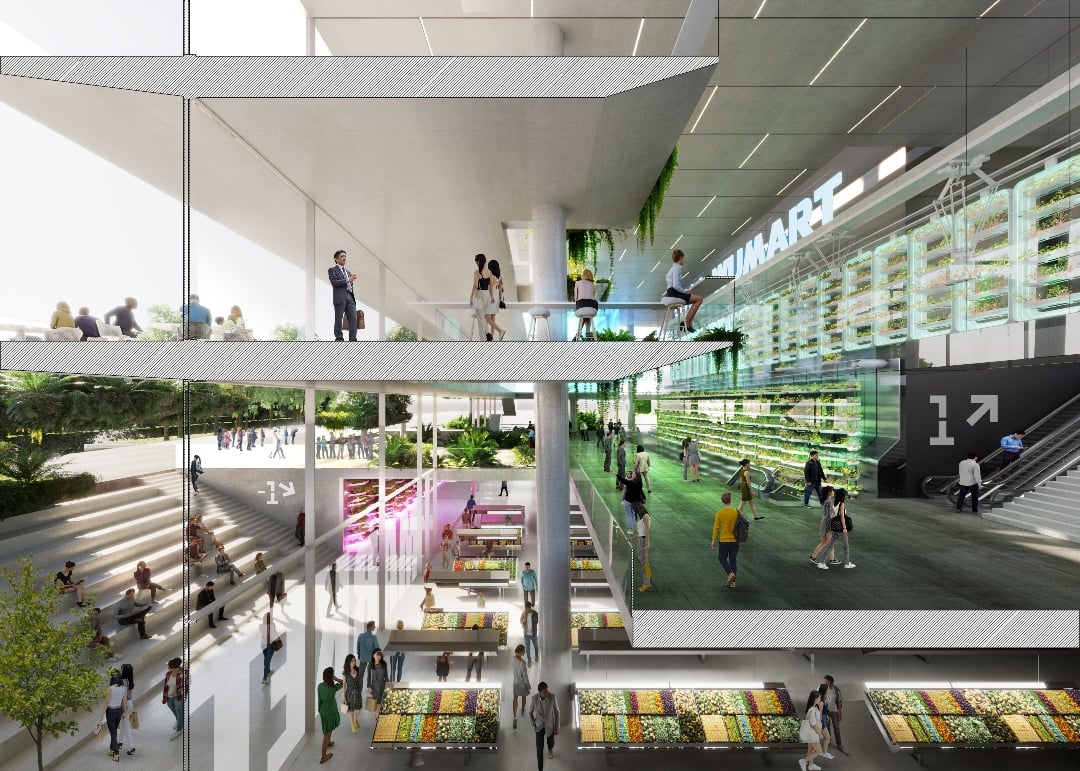 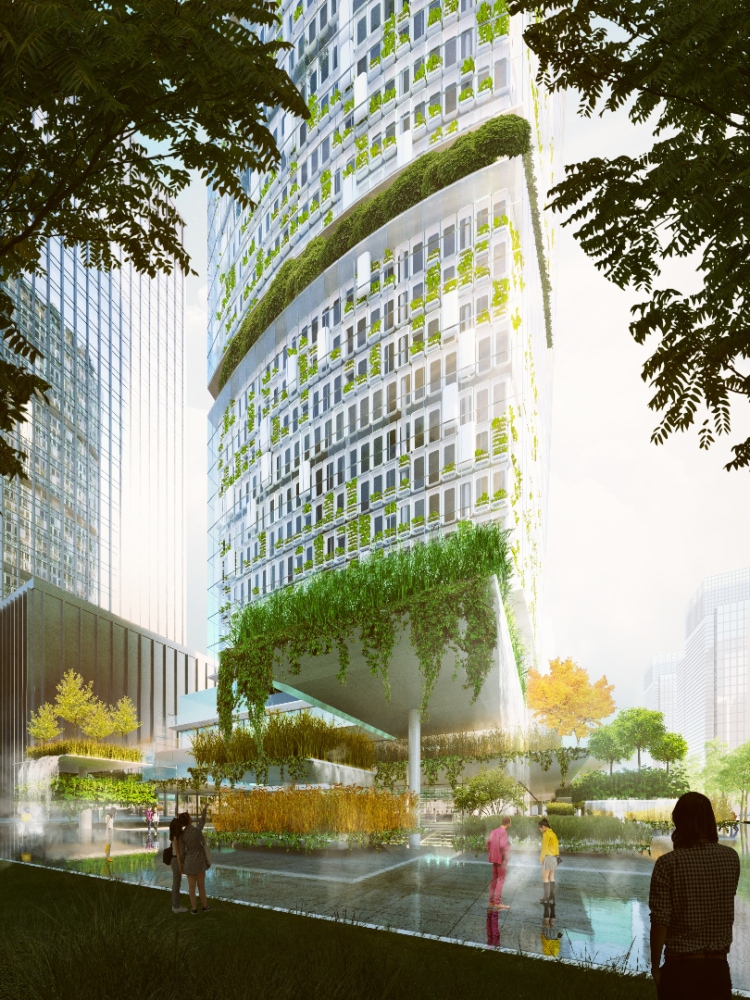 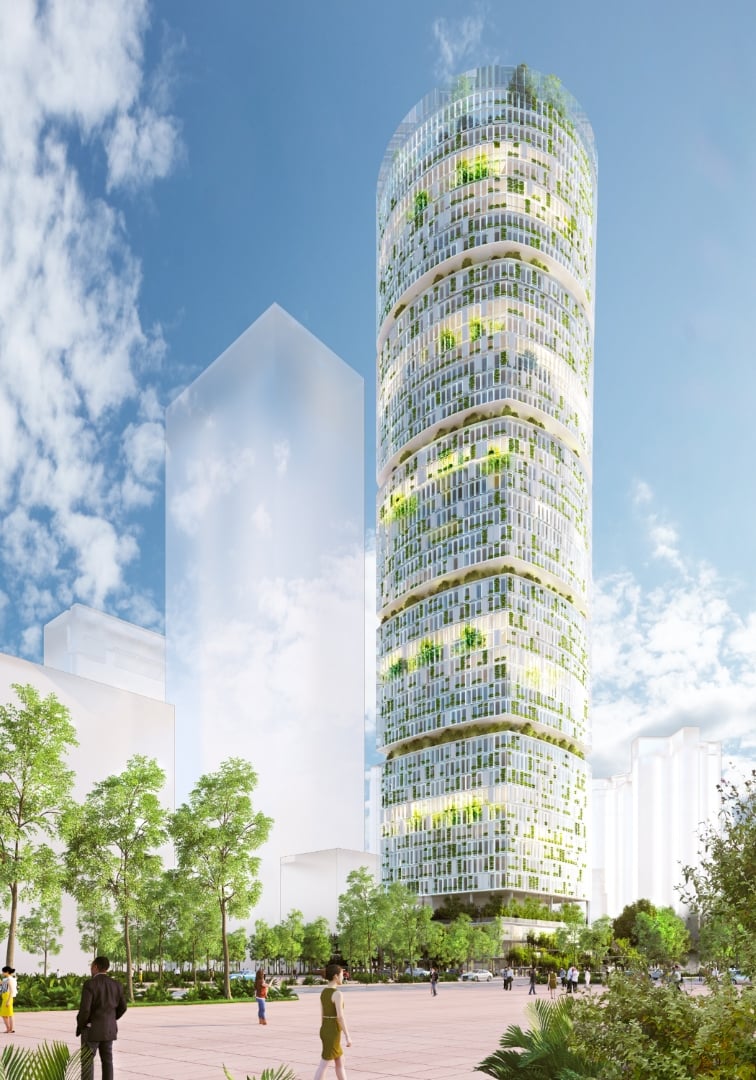 Carlo Ratti Associati is an international design and innovation practice based in Turin, Italy, and New York City. Drawing on Carlo Ratti’s research at the Massachusetts Institute of Technology (MIT), the office is currently involved in many projects – from furniture to urban planning. Among recent projects, there are the Italian Pavilion at Expo Dubai 2020, the CapitaSpring skyscraper in Singapore, the curatorship of the “Eyes of the City” at the 2019 Bi-City Biennale of Architecture and Urbanism of Shenzhen, the redesign of the Agnelli Foundation HQ in Turin, the masterplan for Milan Innovation District (MIND). CRA is the only design firm whose works have been featured three times in TIME Magazine’s “Best Inventions of the Year” list – respectively with the Digital Water Pavilion, the Copenhagen Wheel, and Scribit. In the last years, the office has been involved in the launch of Makr Shakr, a startup producing the world’s first robotic bar system, and Scribit, the write&erase robot.