Dingshu Vocational School, where the ideas around the art of pottery develop

Pottery has been made in Dingshu, Yixing, 200 kilometers from Shanghai, since the Neolithic period. As the "pottery capital," Dingshu produces various kinds of pottery. The most important is the "Yixing teapot," made by zisha (Yixing clay) and has been popular among Chinese tea lovers and pupils for centuries. Rich in its geological veins of zisha, Dingshu became influential for its exquisite Yixing pottery worldwide. In such a town where culture, industry, and daily life weave around zisha, most local people are engaged in the making, trading, learning, and training related to Yixing pottery. With the booming development of the zisha industry in recent decades, the unique pottery culture has given rise to a new demand for a new building type dedicated to pottery-related activities, thus posing a great challenge for the architects. The new vocational school buildings carry the artisanship spirit of Yixing clay teapots. At the same time, it brings a cultural center to the town for the local and neighboring communities. After the campus's completion in 2020, it has been a vital learning hub for artisans to develop ideas around the art of pottery, a destination for pottery lovers, artists, and scholars from all over the country to explore ideas and spread out the cultural roots of Yixing pottery. By studying the local pottery history, genarchitects learned how pottery making was handed down from master to apprentice in the workshop. By having seminars with people from the surrounding communities, practitioners, teachers, and craftsmen, genarchitects found the clue of creating "an artisan school," and the design goal of a low-density campus centered on a "pottery workshop" was gradually established. Instead of designing a common campus with massive buildings and extensive squares, Dingshu Vocational School of Pottery is a low-density cluster of buildings that adopted the meandering spatial layout of traditional artisan workshops. The four essential buildings, i.e., two workshops, a multifunctional hall, and an exhibition hall, are placed at the center of the campus, and the Beech Tree Plaza enclosed by them serves as a central stage for outdoor events. The architects prioritized the unique spatial requirements for each step in the process of pottery making and arrived at a variety of unique spaces, including classrooms with open views and even light for reading and drawing, introverted and quiet workshops for sculpturing and embossing, and an exhibition hall with a tranquil atmosphere surrounded by large beams and columns for exhibiting the outstanding pottery works. Each function acquires its corresponding space, structure, and equipment, resulting in a series of single buildings on their own. A dozen scattered, low-rise "small buildings" are thus improvised, with different types of exterior spaces existing between them, all having good natural lighting and ventilation. These juxtaposed various internal and external spaces are linked by canopied semi-outdoor porches and form a rich, diverse environment. The pleasant landscape and the atmosphere of free communication serve as a source of inspiration for pottery creation. Dingshu Vocational School of Pottery covers an area of 29542 square meters, with a total floor area of 10905 square meters. The campus is divided into seven components, a major workshop, a minor workshop, a classroom unit, a service building, an administrative building, a multifunctional building, and an exhibition building. The architects devised the buildings in small volumes, set building density at 22% and height at 2-story high (3-story for the administrative building), and deliberately extended the corridors to 4 meters wide. These strategies are purposed to provide people a sense of wandering through a cluster of low-rise buildings. Brick, concrete, and sandstone are the main materials for this campus. Brick firing, wall masonry, and concrete casting are similar to pottery making and convenient for local builders to take on. The use of ordinary materials combined with new construction techniques allows the campus to merge into the existing context of the town easily. Upon completion, the builders and local residents immediately feel so close to the new campus. At the same time, the architects also considered the economy of construction cost in choosing materials and structural systems. As a result, the fundamental enclosure structure is made of 400mm thick double-leaf sandwich walls, combined layers of aerated concrete block, insulation panel, and red brick, which ensures the thermal performance of the building and reduces energy consumption under the local climate situation of hot summer and cold winter. The 150mm wide pine wood has been repeatedly used throughout the construction site. The innovative concrete system has played a central role in this project. Looking at the ecological and economic cost, genarchitects decided to use the same group of wood panels for concrete casting, but differently arranged frames led to distinct final textures. The architects deliberately devised each concrete form and used different proportions of release agents so that the same formwork ended up shaping the concrete with relative differences in roughness and gloss. Instead of covering the facade, genarchitects decided that the structure of the building is partially revealed through appropriate maneuvers, allowing the structure's own qualities to shape the overall spatial atmosphere, like the artisan's bodily movement. The sandstone paving on the floor has a natural and timeless texture with a porous surface, making it extraordinarily harmonious with zisha. The architects divide the sandstone into 50mm thick slabs and pave them on the ground. This material has a feeling of gravity, together with concrete and red bricks, and shapes the humble and graceful character of the whole campus. 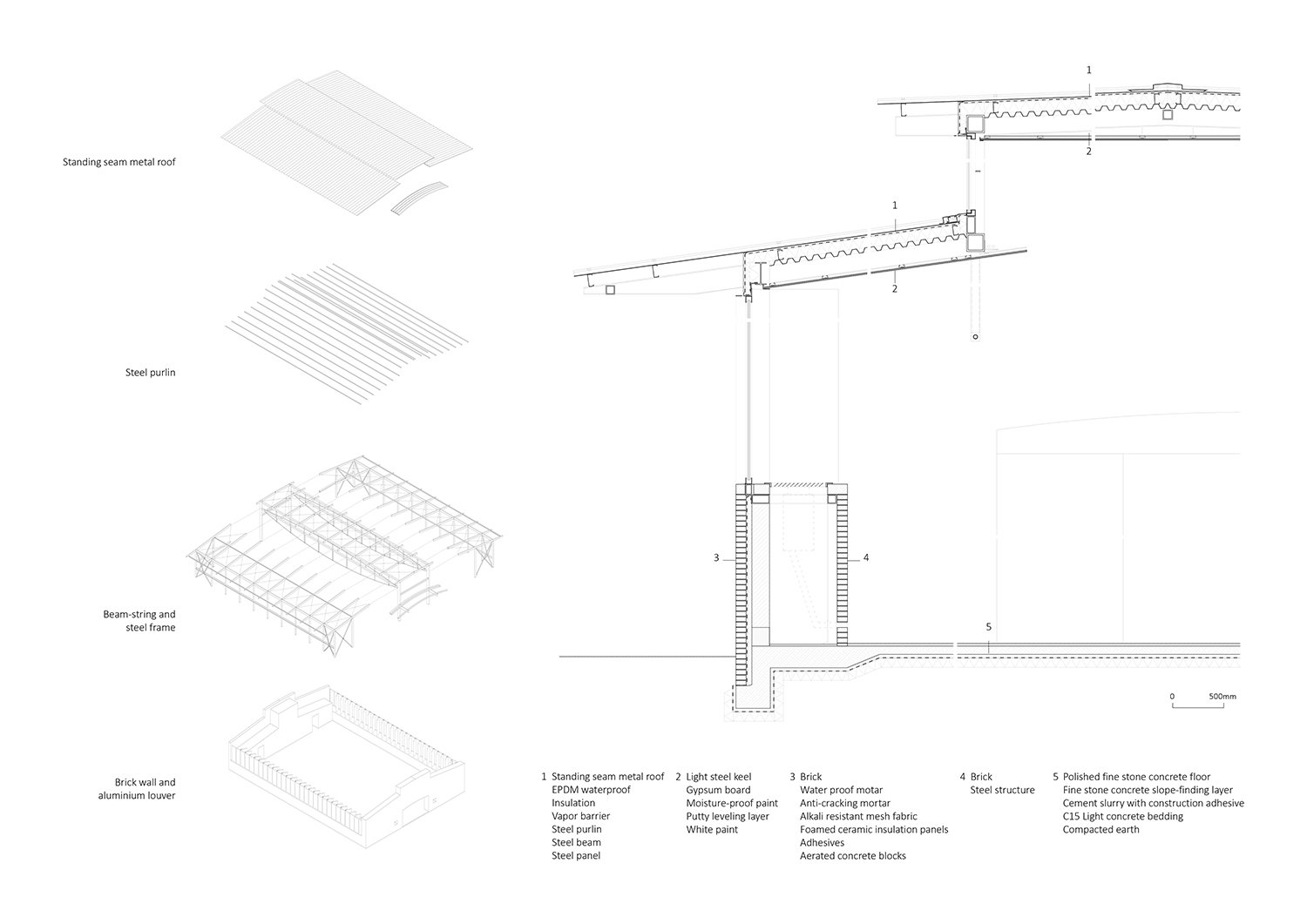 Based in shanghai, genarchitects was founded in 2013, under the leadership of three principals, Fan Beilei, Kong Rui and Xue Zhe. Whether in urban or natural environment, genarchitects insists focusing on the genuineness of designing and constructing. We believe that we could offer a calm and sincere answer towards complicated and uncertain reality situations by discreetly dealing with site and functional requirements.
The completed works of genarchitects have been published and exhibited widely, including Venice Architecture Biennale 2021, Sino-Europe Invitational Architectural Exhibition 2020 and Contemporary Chinese Architecture Exhibition at Harvard GSD 2016.
The principals serve as visiting lecturers at Tongji University, and also served as guest critics at Southeast University, Tianjin University. Meanwhile, they are invited to give lectures at various institutions, such as Tongji University, Nanjing University, Shanghai Jiaotong University and Power Station of Art Shanghai.