On the hills on the south-eastern side of the province of Bolzano, along the renowned wine route, amidst vineyards and small forests, one can admire original private villas built in recent years.

In the 1950s and 1960s, after the Second World War, many citizens moved from the city center to these hills to enjoy greater peace and an exclusive view of the surrounding peaks.

This is the scenery in which Villa EB is set. Villa EB is a semi-detached residence created after a complex renovation of a old villa built in the early 1960s. Although the previous residence had high living standards and it was built with top-quality materials and finishes, it however showed all the limitations of a house designed according to the canons of the time, for example: a very closed envelope, with a very low ratio between glass surfaces and solid walls, with few views of the landscape and very low ceilings.

The wish of the new owners was to have a place where the house would be embedded with the surrounding space such as: the garden surrounding the house, the nearby woods, and above all able to blend in with the surrounding landscape without sacrificing modern lines and large windows that allow the view to be enjoyed from different angles.

These were the roots for this project. The spatial expedients such as: the increase in the net heights on each floor, the remodeling of the partition walls in the living area in order to create large living spaces on the ground floor without losing the form/functional relationship between the various areas ( kitchen and study), are linked with the choice of external materials, such as the “Mönch und Nonne” tiled roof in which the lower "nun" cup is interlocked with the lower "monk" cup, the “Pfitscher Gneis” natural stone walls, the exposed wood cladding and the architectural elements in earth brown metal sheet.

Inside, the spiral staircase in metal and wood that connects the ground and first floors is topped by a large oval skylight, clearly visible in the zenith view as symbiotic relationship between light and matter.

Outside, the glassed façades with large sliding doors on both floors provide access to the outside from almost every corner of the house: on the first floor to the covered terrace and on the ground floor to the garden that surrounds and wraps around the house up to the "infinity pool" facing the valley that leads from Bolzano to Merano. 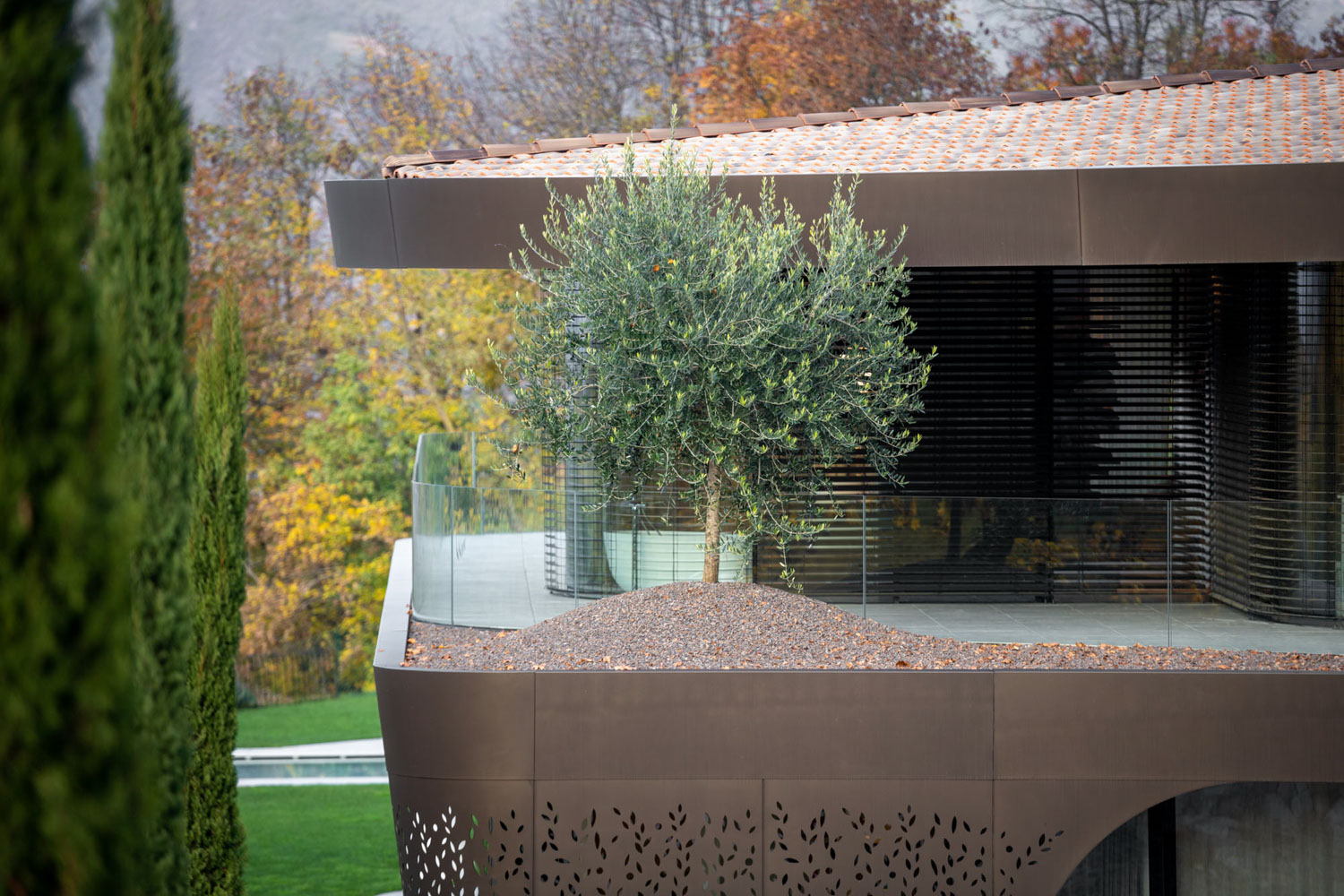 The architecture office monovolume has been working in the sector of architecture and design since 2003 piloting projects, that go from urban design to interior design and furnishing.
The architects met at the faculty of architecture at the University of Innsbruck, where they have already collaborated and worked together on projects. The participation at several national contests has given them the opportunity to carry out a number of successful projects which laid the foundation stone of the actual teamwork and the beginning of the mutual professional activity.