After a search for the best possible result to ensure the equal view of the courts from different directions, the project has been generated by a geometric combination of badminton courts. Around ten badminton courts a circulation belt of 3m was formed, this is how spectators or athletes can freely move all around. This circular space was surrounded by a large triangle which forms three triangular areas around the circle. Thanks to this organization of space three spectator stands were generated all of which has different view directions to the courts. In order to assure the proper angle for the triangular stands to view the courts, they were elevated upwards and were connected with triangular trusses so each triangular space carries each other’s load. Thus a dynamic interior setting was formed.

Current building’s footprint on site seals the monument and leads to an inefficient use of the plot. Instead of this, gymnasium hall was moved away from the monument. Therefore the surroundings of the monument were relieved; in addition to this a new urban square was formed. With the new bridge that was asked to be designed a new orientation to the sports areas at the north was provided.


The topography of the plot was designed at three levels which are the area with the monument and trees which were left intact, the area organized for the car park, and the area left for the use of pedestrians. A direct access from car park level to the gymnasium was adopted so at the times of intense use people coming from different places shall easily reach the gymnasium. Easy access with ramps and stairs was provided from car park level to the pedestrian square. With this move the building was integrated with its surrounding. The exposed level differences formed between the points of the building’s base thanks to the sloping terrain were transformed to soft passages with terraces. These triangular open terraces enable different open activities around the building. With large triangular facades elevating to three directions, the building will be a new landmark and reference point for the city.
The hall arranged for daily use is placed at pedestrian level. Beneath the gymnasium a semi open space was left for free circulation. The gymnasium hall enjoys daylight from three triangular facades. Moreover thanks to the circular skylight at the center of the roof which is clad with membrane material any time of day natural illumination is provided. By allowing controlled daylight inside, a sustainable, low-energy architecture was targeted. The structural setting was designed by mutual pulling force of the stands to each other using roof trusses and circular beam at the center. This tripartite balanced structural system is the main element of the architectural language of the project. 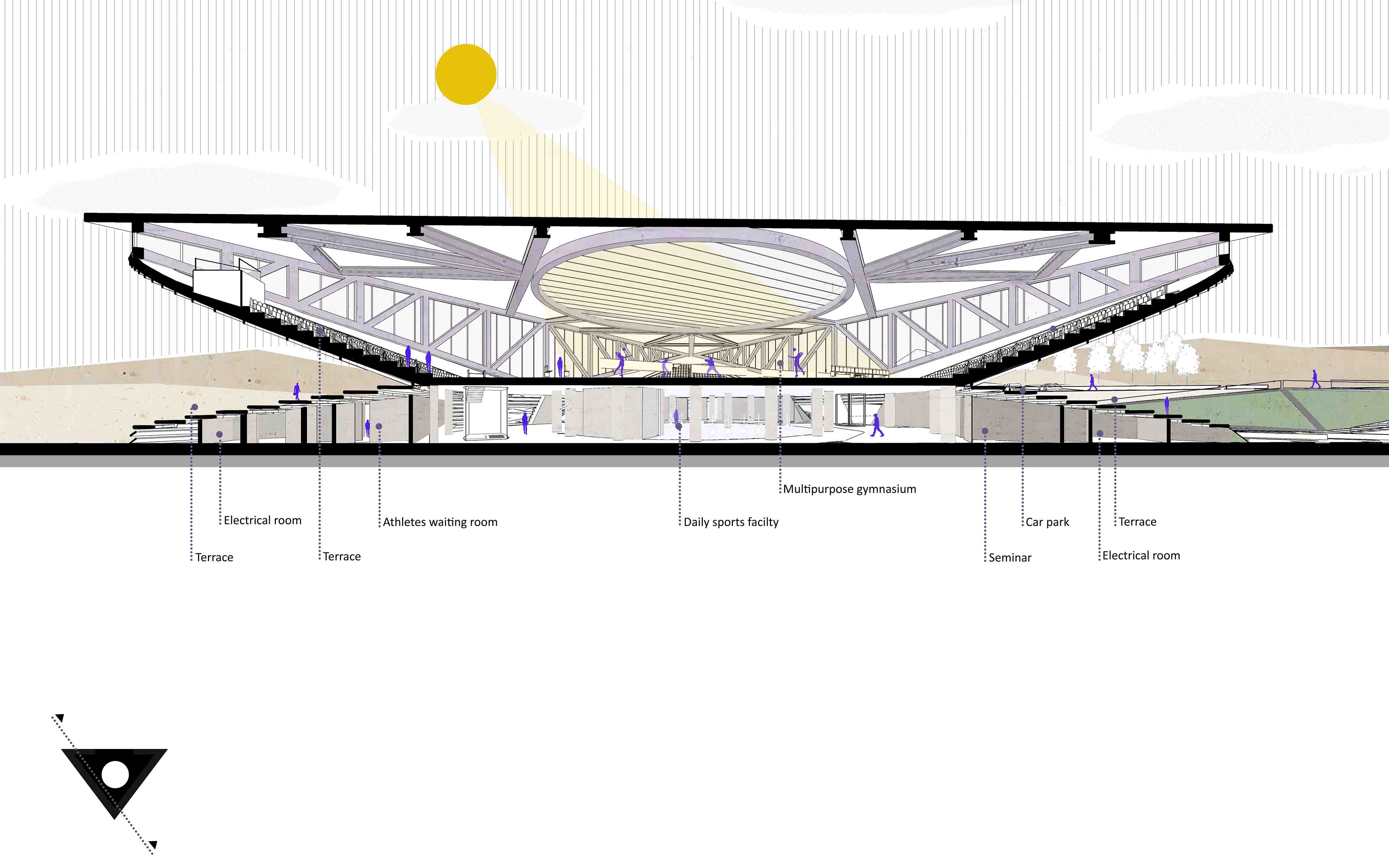 Kigali and Istanbul based architecture office WALL Corporation was founded by architect Selim Senin in 2010 at Istanbul first. Senin has established Wall corporation in Kigali in 2017 too.He continues to work on various projects in Turkey and Rwanda based in Istanbul and Kigali. WALL Corporation is the architectural design company which has received more than 40 international architectural design awards from Italy, UK, Russia, India around the world. WALL is a company that can design buildings in any function regardless of scale and structure typology.Besides the design of the building, it contains all the engineering disciplines required for the construction of the building.WALL designs the building to be built, from the master plan decisions to the details of the manufacturing to be made on site.