Masters of Architecture - a mobile installation for a special exhibition Masters of Architecture is a series of architecture lectures organized by the Association of Polish Architects in Katowice (SARP Katowice). This special exhibition was created to sum up the history of all the events. A moving installation consists of 70 circles, corresponding to 70 Masters of Architecture who visited Katowice and shared their knowledge with Polish audience.

The series was originated in 2004 and supposed to be a cycle of 5 lectures only, given by architects representing 5 biggest European capitals. The first one was London, which seemed to be a city full of fresh ideas. That’s why the first speaker ever was Simon Foxell - the president of Royal Institute of British Architects (RIBA) at that time. His speech, as well as the next 4 talks about Berlin, Paris, Vienna and Amsterdam received extremely wide interest from local architects and architecture students. As a result, the only decision possible was to go on with next events. The Masters of Architecture series is organized up to now and influenced the education of hundreds of architecture students who received an access to much more extensive knowledge than their predecessors from post-communist era. Between 2004 and 2020, the city of Katowice hosted 70 architects from all over the world, including winners of the most significant architecture prizes.

At the exhibition, all the circles are two-sided - from one side there is a name of the architect and from another - a photo of his most recognizable building. The setting of the circles is chronological, accordingly to the sequence of lectures. All the elements of the exhibition are mobile, what encourages visitors to interact. Furthermore, the mobility of circles results in continuous variation of the installation’s appearance, depending on the arrangement of its elements. Thanks to its modularity, the installation can be divided into smaller parts and fits into any interior, no matter what shape and dimensions it has.

The whole exhibition is dominated by turquoise - a color identified with the Masters of Architecture series. The exposition has been illuminated using reflectors installed under the ceiling. They cast a characteristic and dynamic shadow on the floor and build the atmosphere in the exhibition’s space.

Besides the 60 circles with the Masters of Architecture names, the installation contains some bigger circles with architect’s portraits, together with their opinions about the city of Katowice. All these quotations are very diversified. That illustrates how much the perception of the city has changed, together with its development within the last years.

An extra gesture of the installation are mirrors, located at some of the circles. When young architects are visiting the exhibition, they can see their own reflection there. Who knows, maybe in the future they will become Masters of Architecture as well. 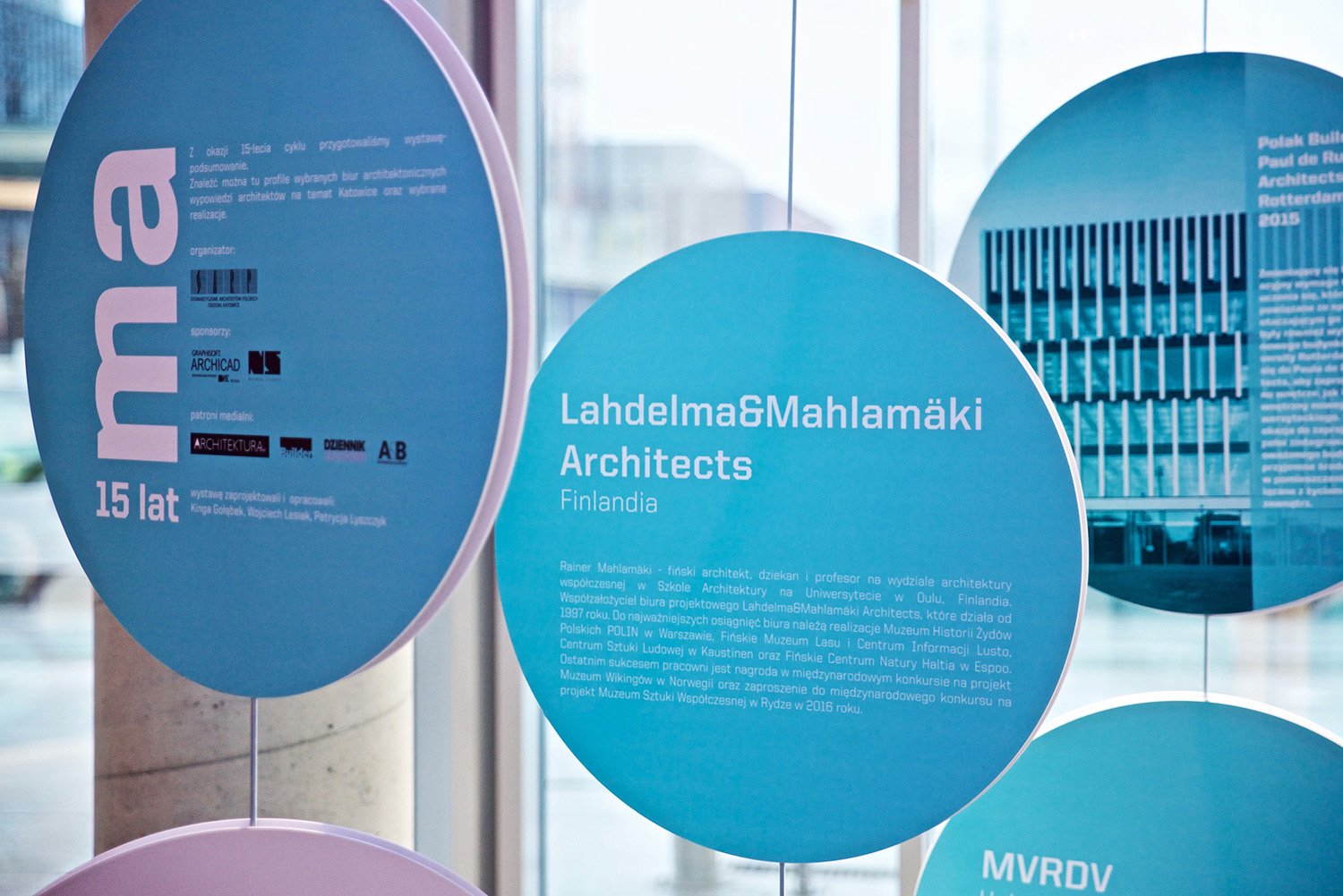 Association of Polish Architects (SARP), together with Polish Institute of Architects (Izba Architektów Rzeczypospolitej Polskiej) are the two key leading institutions in Poland, concerning matters of architecture, urbanism and spatial design. SARP is responsible for organization of public competitions, prize nominations, event organization and very widely understood marketing and advertisement of architecture. SARP is an opinion-giving institution when it comes to the city consultations, governmental consultations or any other formal discussion concerning architecture.

For many years, the Katowice branch of Association Of Polish Architects (SARP Katowice) is a place that integrates both local architects and people interested in architecture and urbanism. It is well known because of organizing an international series of lectures entitled Masters of Architecture. The current president of SARP Katowice is Mikołaj Machulik.