Located at Niederhafen on the Elbe River between St. Pauli Landungsbrücken and Baumwall in Hamburg, the upgraded 625 metre river promenade is integral to the modernisation and reinforcement of the city’s flood protection system.

In the aftermath of storm surge floods in February 1962 that caused 315 fatalities and destroyed the homes of 60,000 residents, between 1964 and 1968 Hamburg developed a barrier on the banks of the Elbe at Niederhafen to protect the city against floods up to a height of 7.20m above sea level.

Modern hydrology and computer simulations have since analysed and forecast the city’s flooding characteristics with greater accuracy; calculating that an increase in the barrier height of 0.80m was required to protect Hamburg from future winter storm surges and extreme high tides.

Inspections of Niederhafen’s existing flood barrier in 2006 determined that supporting elements of the existing structure were overburdened and its foundations needed significant reinforcement. Later that year, the city of Hamburg organised a competition to design the redeveloped flood barrier and subsequently awarded the project to Zaha Hadid Architects.

With construction of all phases now complete, the redevelopment of Hamburg’s Niederhafen flood protection barrier re-connects its river promenade with the surrounding urban fabric of the city; serving as a popular riverside walkway while also creating links with adjacent neighbourhoods.

Wide staircases resembling small amphitheatres are carved within the flood protection barrier at points where streets from the adjacent neighbourhoods meet the structure; giving passers-by at street level views of the people strolling along the promenade at the top of the barrier as well as views of the masts and superstructures of ships in the Elbe.

Alternating with these city-facing stairs, similar amphitheatres facing the river are also carved within the structure; generating an oscillating sequence in the river promenade as it repeatedly widens and narrows.

Dedicated cycle lanes at street level run the length of the flood protection barrier. Wide ramps at Baumwell and Landungsbrücken connect the river promenade with street level and provide accessibility for all. A third central ramp enables service vehicles to access the promenade and Überseebrücke.

The river promenade is divided into two sections with different spatial qualities. The zone to the west is at a larger scale, offering wide views downstream of all shipping activity on the river. To the east, the port’s marina creates a more intimate atmosphere with a long ramp alongside the amphitheatre leading visitors down to the water’s edge.

A three-storey restaurant and two food kiosks are integrated within the flood protection structure. The top floor of the restaurant cantilevers over its adjacent staircase and gives diners panoramic views of the Elbe.

Pedestrian areas of the promenade are clad in a dark, anthracite-coloured granite that contrasts with the light grey granite of the staircases. 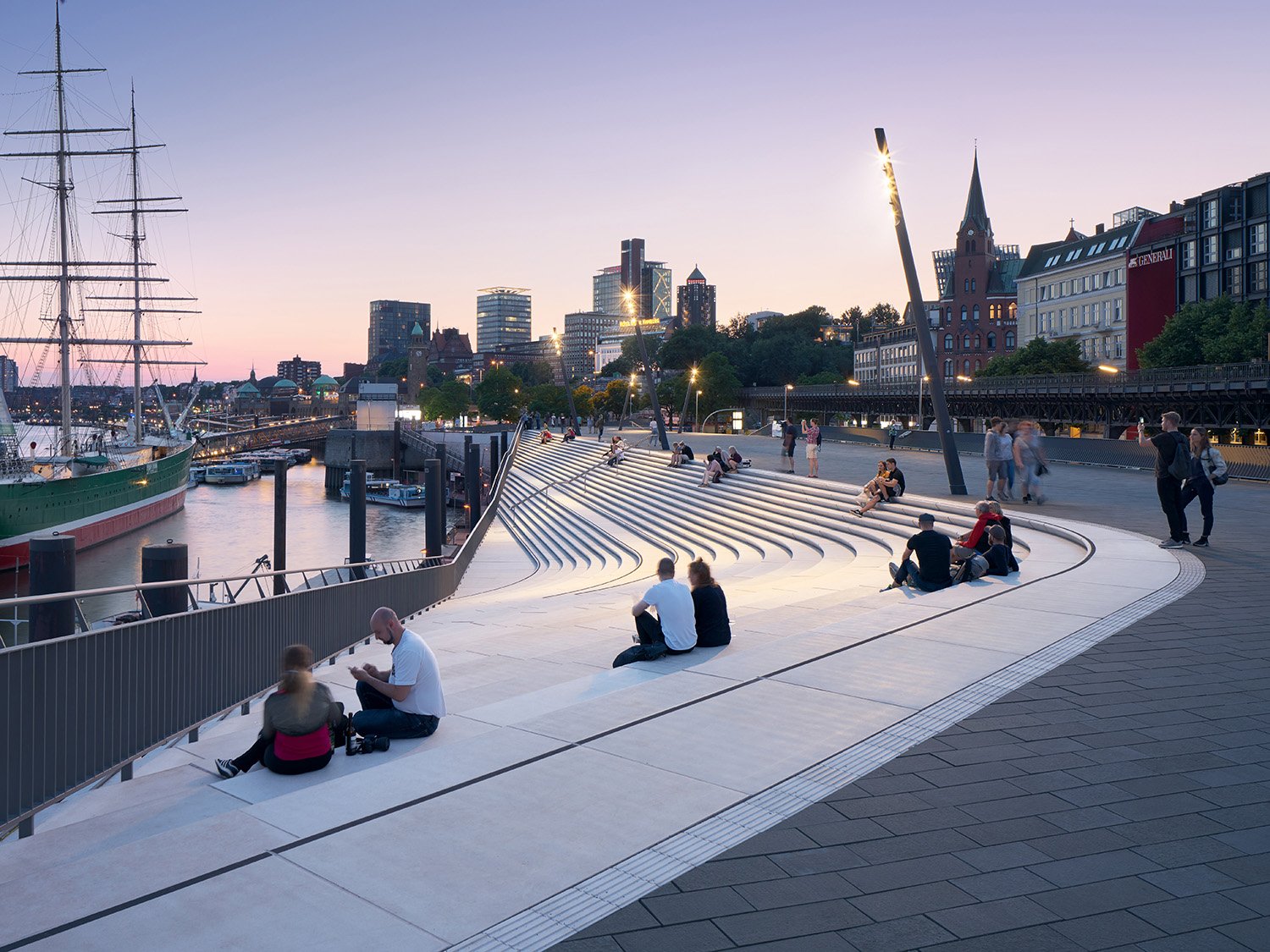 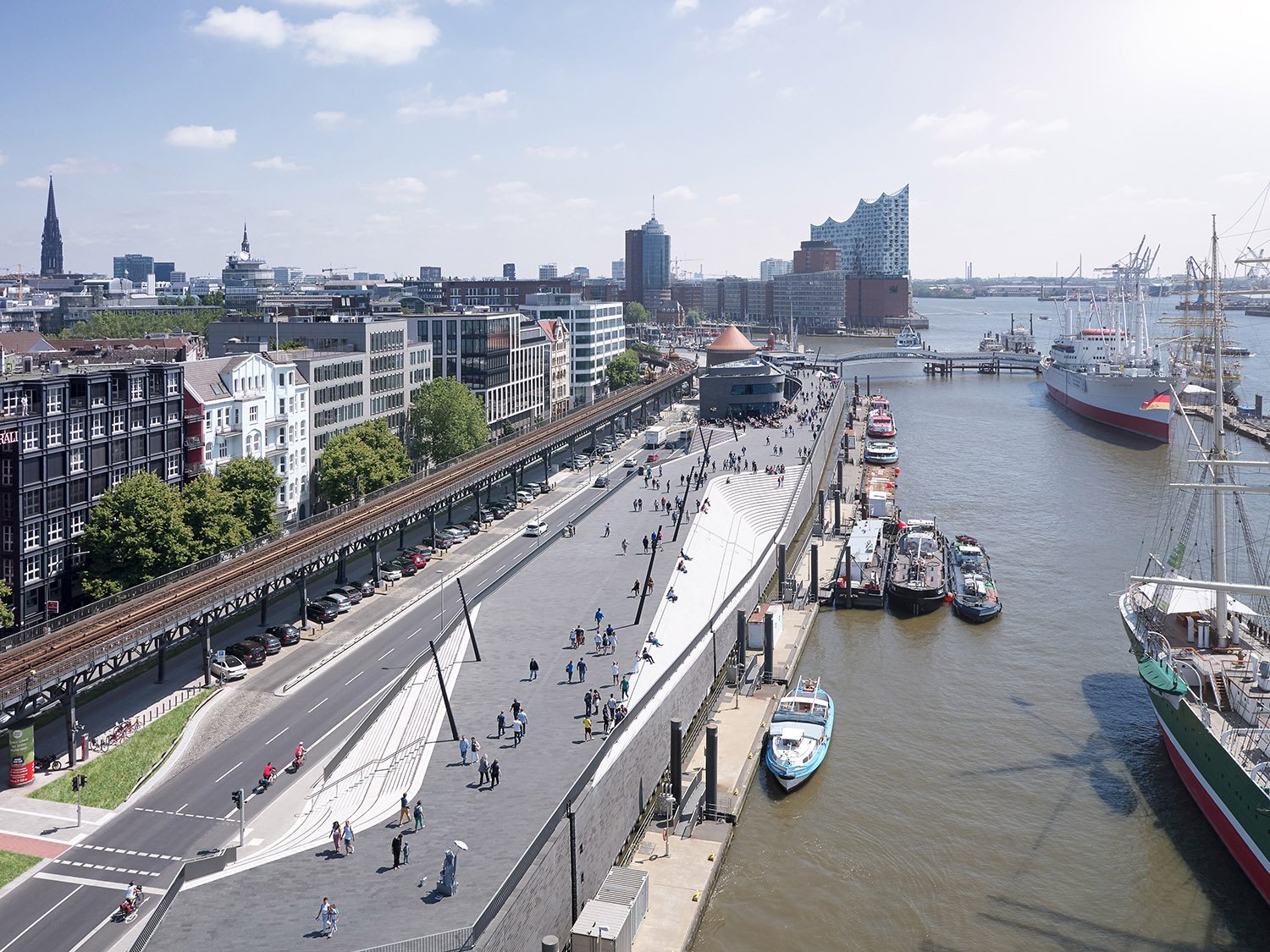 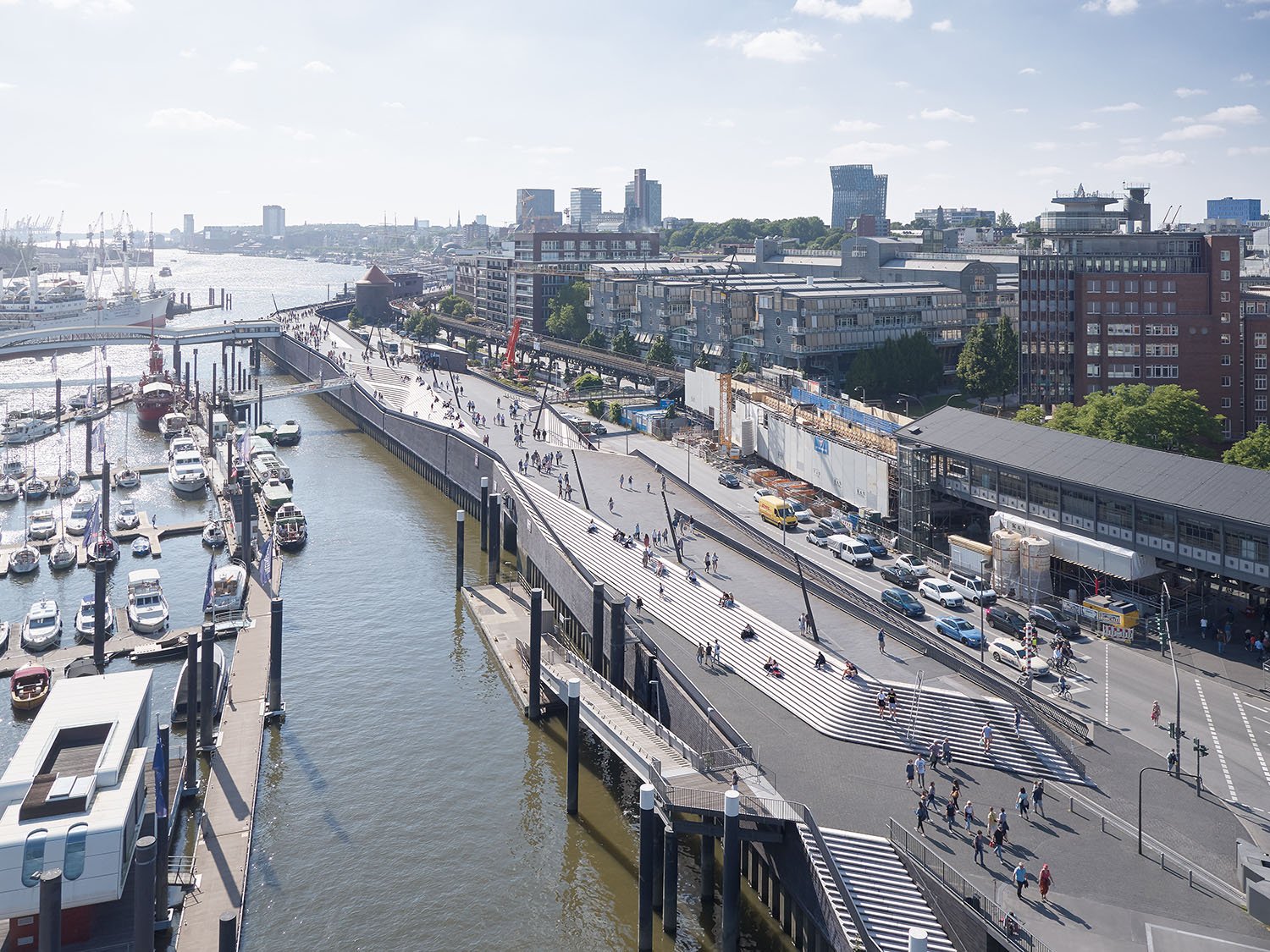 Working with clients that have global reputations for excellence, Zaha Hadid Architects (ZHA) has redefined architecture for the 21st century with a repertoire of projects that have captured imaginations across the globe.
Form and space are woven within the structure of buildings that evolve from their surroundings and tie disparate programmes together. Enticingly contextual, each project combines an unwavering optimism for the future with concepts of connectivity and integration.
Receiving the highest honours from civic, professional and academic institutions worldwide, ZHA is one of the world’s most consistently inventive architectural studios—and has been for four decades.
Collaborating with visionary clients, communities and industry experts on more than 60 on-going projects, ZHA’s hugely talented and dedicated teams of over 400 experienced professionals work with passion and commitment to honour Zaha Hadid’s legacy and create transformational projects on six continents.