Regeneration project of Residential Center for railway workers in Roccapalumba-Alia In the last years, the depopulation of small cities have been gradually increasing, causing negative impacts under the social and economic point of view as well as deeply affecting the discipline of conservation and care of cultural and architectural heritage.

Without any doubt, we’re witnessing a strong demographic centralization towards medium to big cities and big metropolitan cities. Such a phenomenon is unavoidably destined to increase furthermore in the following decades, leading, thus, to the complete depopulation of small towns.

On the base of these premises, the proposed work focuses on those internal city areas and on those urban settlements considered to be “secondary”, such as villages and towns, which are gradually losing their urban potential due to the progressive phenomenon of depopulation and weakening of internal and external urban spatial relations, with the definitive objective of a global re-valuation of these areas.
More specifically, the project under evaluation is going to deal with an area within the municipality of Roccapalumba, in Palermo’s province: here an old village, which was joined together with the Roccapalumba-Alia train station, was originally born as a residential settlement for the Country railway workers.

Here, the residential complex immediately appears to be ideally oriented with respect to the main urban and suburban axis of the area: it is, in fact, overlooking towards the S.S. 121 Catanese and it is 700 meters far from the Roccapalumba–Alia Railway Station.
Originally, the existing residential settlement is composed by ten buildings, oriented along the East-West axis: six of which are characterized by the same linear building typology with a central vertical distribution core serving three apartments for each floor for a total of four storeys, besides for the underground floor destined to host evacuation rooms; the two other volumes are, instead, organized on three storeys, besides for the underground floor, having a vertical distribution core which would serve two apartments for each floor;

The whole building complex would, furthermore, include two additional underground volumes which would host a first-aid station and a church, including a small accommodation;
Finally, the settlement is served by a paved road departing from the S.S. 121.
As far as regards the main project theme and its main functional destination, the whole project was conceived out of the willing to valorise and regenerate the wide area where the existing residential railway workers complex rises, nowadays in a complete state of abandonment and disuse.

The project’s main goal is to create a new system whose’s centrality, with the implementation of a new strong urban hinge, would help instate new relationships with the close by urban settlements, intensifying, thus, the communication and transportation means, as well as the commerce and the tourism.

Aimed at achieved such an objective, the development of the project was based on two main actions:
Firstly, the project proposal suggests to transform the street surface of the site area into a wide pedestrian pathway, with the insertion of a first hub to enable the circulation inside of the area by means of electrical vehicles such as bicycles and push scooters. For the achievement of such a purpose, it was considered the introduction of a functional exchange parking lot, close by the S.S. 121, which would enable to park easily the car and proceed with one among the available electrical vehicles. A secondary hub will, furthermore, be placed inside of the Roccapalumba-Alia railway station, to enable also whomever will get to the train station to get inside of the new residential complex by means of the same electrical vehicles.
The second step taken into account for the project proposal development is the necessity to plan an adaptive re-use and regeneration of the existing buildings, in order to redeem and valorise them. More in depth, six among the ten buildings will be functionally re-used as residential spaces for tourists, whereas the resting two buildings will be aimed as hostels; the existing first-aid station will be turned out into a welcoming reference point for the whole complex.
Additionally, a new urban square will face the local church, contributing to the regeneration of the whole area, and, most importantly, serving as the covering for the new great landmark of the whole complex: a new innovative multifunctional building. The building, partly below the ground floor level, follows and adapts itself to the landscape morphology and is characterized by a structural configuration constituted by segments of bearing walls and a walkable green roof, serving as a square. As far as regards its functional destination, the building, organized on two levels, will host a restaurant, an exhibition space, a conference hall, a wellness centre including an open-air swimming pool, an internet point and a co-working space.

Under the spatial and geometric configuration point of view, the project under evaluation is based on a regular 5 x 5 m square grid, orthogonal to the main urban axis of the area and of the existing church, whereas the swimming pool and wellness centre, both based on a square grid too, would follow the footprint of the Station and of the surrounding dwellings, breaking up the strict geometric scheme.

As a conclusion, the leading concept of the project proposal is the willing to trigger an urban transformation and regeneration by means of urban strategies based on the coexistence of the old urban fabric with the newly built one, defining a new innovative architectural identity. Moreover, the final purpose is the idea of instating a new harmonic relationship in between landscape ad architecture, enabling the newly built up volume to become part of the landscape itself, so that they could be two complementary pieces of a unique environment at the service of human beings. 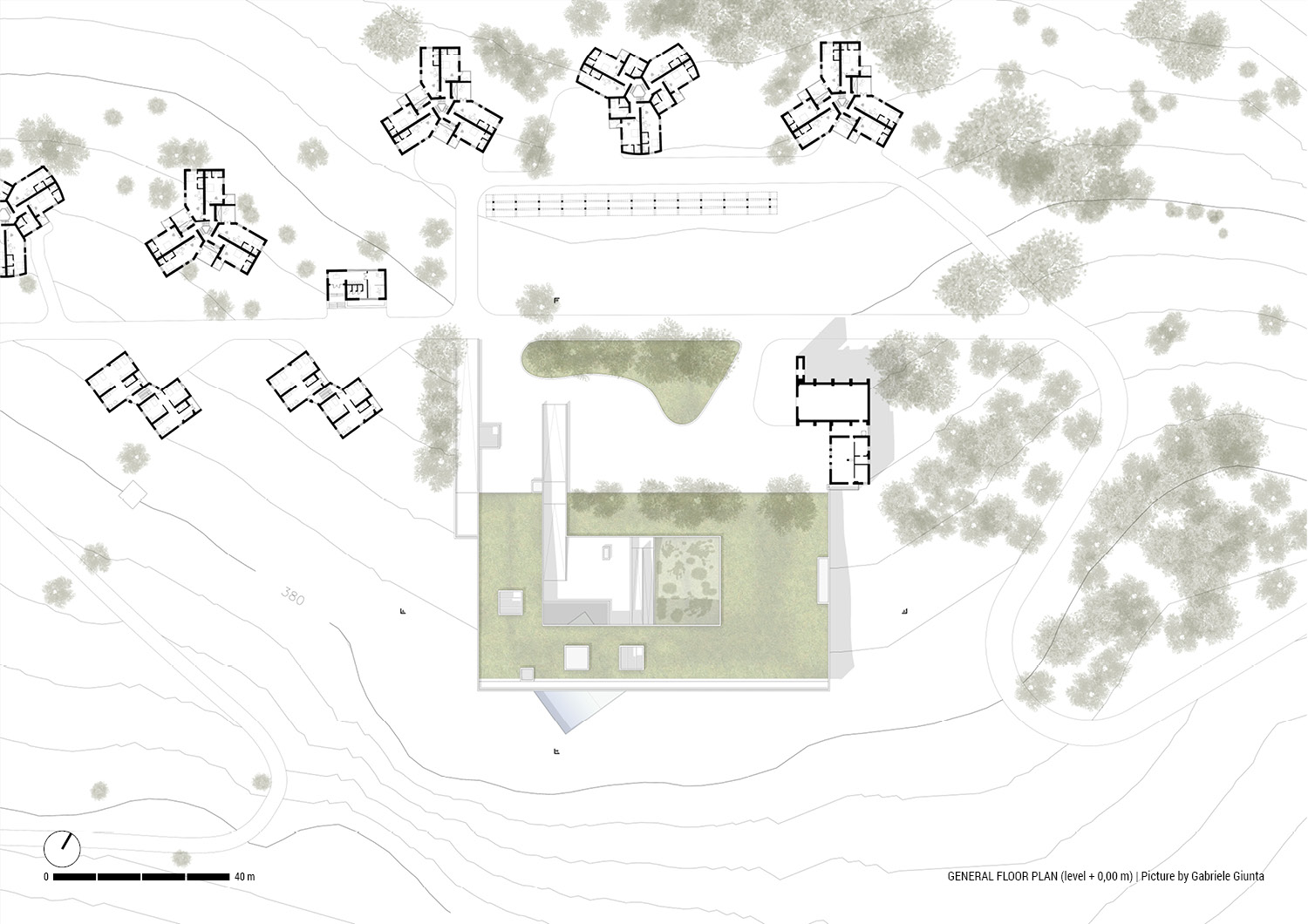 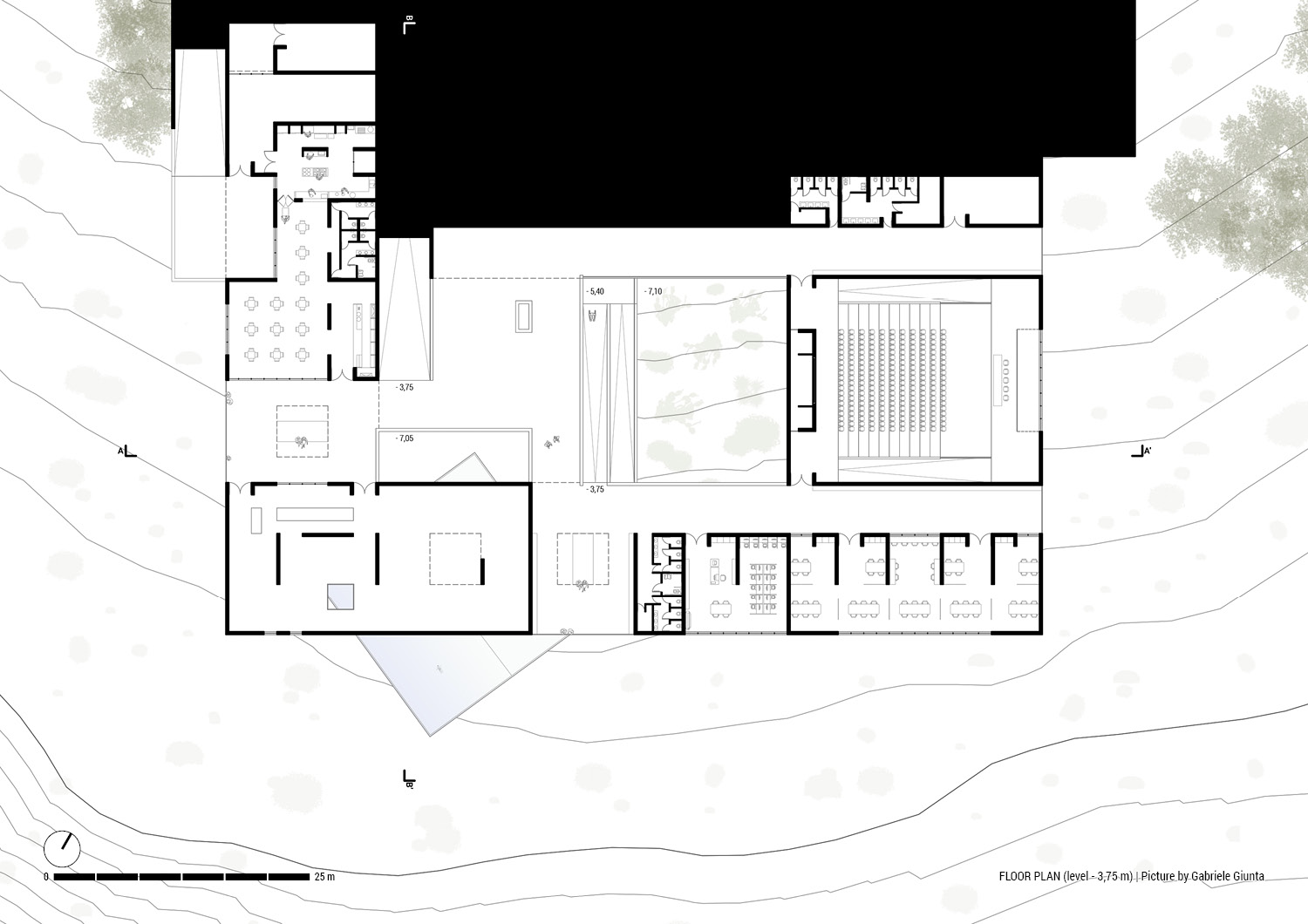