Magische Kammer, a cube in harmony with the natural surrounding basin of Lake Garda The new building is by the side of the recent development of Lazise, in a large residential neighbourhood under urbanization.
The settlement, integrated in the lake of garda, appears as a core within a natural basin surrounded by the Monte Baldo.
The building wants and creates new sight relationship with the urban context of the mountain chief town.
The cube shape and the compact volume allow the architecture of the house a sight range as regards the particular topography of the mountain area where it is located; the patio on the ground floor, around which are the kitchen and the living room, interrupts the compactness of the structure giving light and air to the rooms.
The square and its geometric variation, its half and its multiples are the base and the original shape of the project from the point of view of the plan.
the building is a lookout overlooking the surrounding landscape. The project is measured with the territory using the language of architecture. An artifact designed as part of the morphological order of an settlement reality: the structural conformation of the factories underlines the natural slope of the soil, accentuating the panoramic opening towards the surrounding nature through the emptiness of the surrounding court.
The house is set on a gentle slope, meaning that the ground floor is arranged on two separate levels,with the kitchen and dining area raised up above the living room. This way the different functions are separated, and the rooms themselves seem wider.

At the entrance, the volume thins and is crossed by passing paths, becomes transparent to give permeability to the landscape and moves back from the roof to make way for covered spaces for mediation. The living spaces are brought back to the unit by the roof that recomposes the volumes without interrupting the constant dialogue between inside and outside.
Every detail is reduced and deliberately whispered, sometimes it allows for subtle licenses, the retaining walls made with metal gabions filled with stones found on site or the realization of the visual continuity between the reinforced concrete external face and the internal wooden false ceiling, possible thanks to the wisdom of the craftsmen who worked on the construction site.

The inside layout is oragnized on three levels, one of which is underground and assigned to the service area (cellar, garage, accessory rooms). The ground floor is a single room where the walls define zones intended for different activities (living, open kitchen, hall and study).
The first floor is for the bedrooms. The outside is projected inside the house through the large windows in the patio, which allow the sorrounding landscape to cast inside the house. 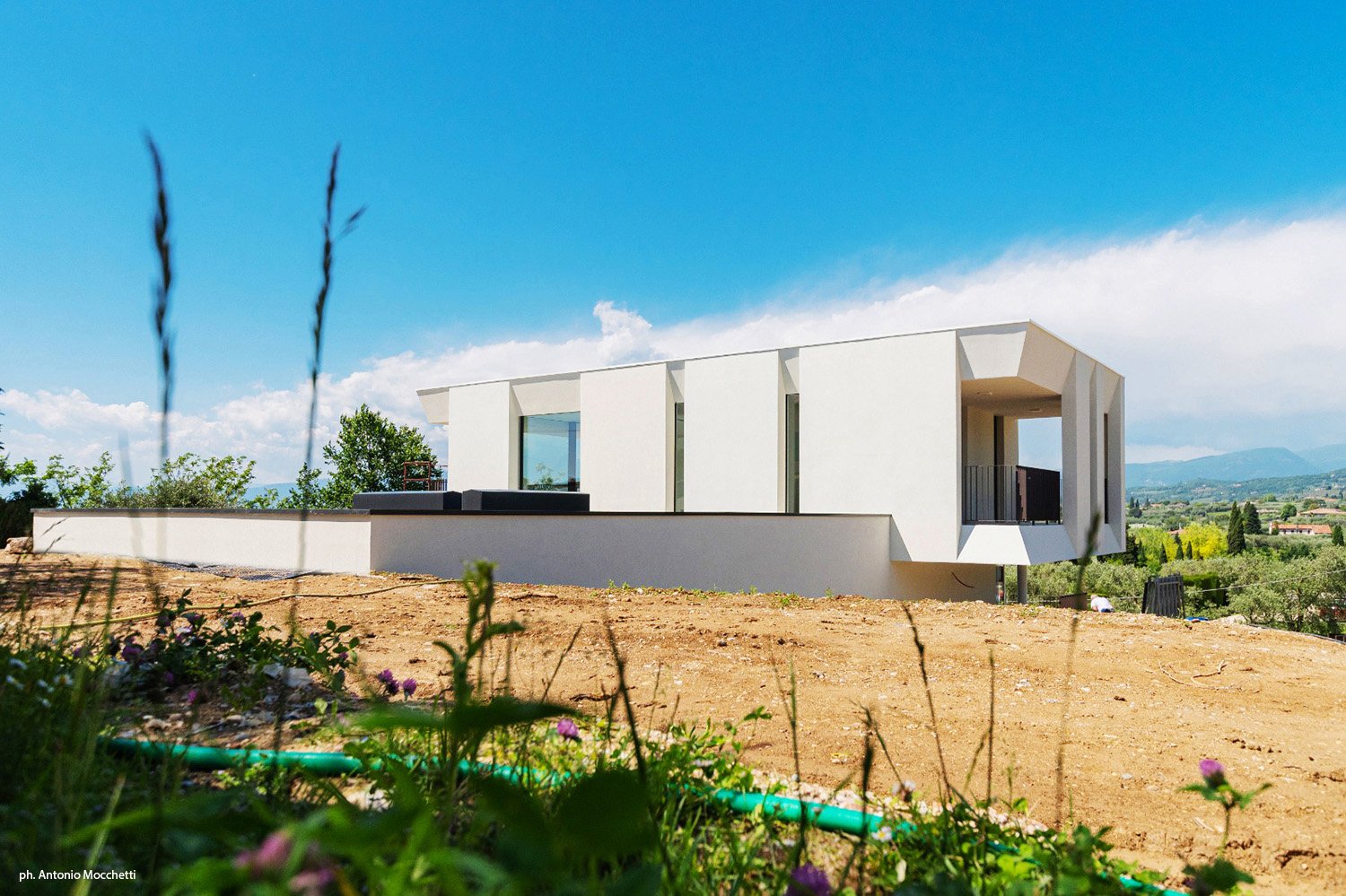 Piersolieri architect is an architectural design office that has been active for twenty years in the European context, where it has developed dozens of projects of various types for private companies and public administrations.
At present the Piersolieri architect staff of 12 is made strong by a network of various professionals, including architects, qualified technicians and specialists in the field, who have at their disposal sophisticated and modern hardware and software equipment for order planning, design development and quality control of construction components. The synergy of heterogeneous professionals with consolidated experience ensures the study of solutions that allow the optimization, the analysis of the territory and the evaluation of possible strategies, without neglecting the objectives set by the customer.