Restoring the interconnectedness, accessibility, and permeability of the embankments of River Moskva The layout proposal for a section of the embankment of the River Moskva between Belorussky and Dorogomilovsky bridges was drawn up as part of the programme for systematic improvement of the city’s waterfront areas.
The main objective of the proposal for reconstructing the embankment is to create continuous pedestrian and cycle routes along the river and to restore the interconnectedness, accessibility, and permeability of the embankments.
This long section of the embankments has a total area of 11.15 hectares and is bordered at both ends by bridges – Dorogomilovsky Bridge in the east and Belorussky Bridge in the north-west. In the west the planned embankment is abutted by the dock of the former western river port and the territory of the ‘Western port. Neighbourhoods on the embankment’ mixed-use residential complex, which is currently under construction. In the south the site is bounded by the service strip for the Filevskaya metro line and a factory owned by FiliKrovlya.
The main cultural highlight of this district is Masterskaya Petra Fomenko, a new theatre building which stands on the border between the existing naberezhnaya Tarasa Shevchenko and the planned embankment area.
The plots of land adjacent to the area of the layout project are currently mainly occupied by disused industrial, manufacturing, and warehouse buildings. Along the entire length of the embankments there is no access to the water, nor are there proper pedestrian paths or transport routes. The river in this part is in effect cut off from the city. To create a comfortable recreational and public urban space, the project proposes creating links with the grounds of the industrial buildings that are to be reconstructed, so as to open up access to the river.
A section of Dorogomilovskaya naberezhnaya will be integrated with the city’s network of transport and pedestrian routes and likewise with the structure of layout proposals which have already been developed. The latter proposals link together the banks of the River Moskva to form a coherent urban space – a new linear centre for the city. The planned longitudinal and latitudinal routes will improve links between districts of the city, including existing residential neighbourhoods and cultural-recreational public spaces.
The development area includes a number of Moscow’s parks and areas of nature. The project pays particular attention to this area’s recreational potential.
Large-scale work will be undertaken to reinforce the riverbanks. A new 972-metre-long retaining wall will be built, and the existing 256-metre-long wall will be reconstructed. In order that the new retaining wall should more smoothly abut the reconstructed wall, a monolithic console will be installed under the pedestrian path. This will be 67 metres long and 1.5 metres wide. Reinforcement of the riverbanks will enable the creation of safe and comfortable areas in which to walk, as well as proper ways down to the water and quays for river vessels.
The entire space along the river is to be given over to pedestrians. Movement along the embankment will be organized taking into account flows of vehicle traffic in such a way as to ensure safety for all participants. In addition to the pedestrian promenade, cycling and running paths will also be provided. The new routes along the river will serve as a continuation of existing routes. This means that when reconstruction is complete, cyclists and people taking exercise will be able to move unobstructed along the river from naberezhnaya Tarasa Shevchenko to the ‘Western port. Neighbourhoods on the embankment’ mixed-use complex and then on to Fili Park.
The central element of the bank space will be a new pedestrian bridge over the River Moskva.
Dorogomilovsky and Belorussky bridges carry vehicles and trains, but not pedestrians. In meridian directions the site is intersected by service strips for the railway (the Moscow Central Ring (Minor Ring of the Moscow Railway) and the Belarus (Smolensk) direction of the Moscow Railway). In addition, in the vicinity of Belorussky Bridge a northern back-up route for Kutuzovsky prospekt will be built. At the present time, the site has no pedestrian link by which people can comfortably cross the river.
The pedestrian bridge will link Moscow’s Dorogomilovsky and Presnensky districts and create direct access from the planned embankment towards Moscow City.
The 12-metre-wide bridge will be two-level, with separate lanes for pedestrians and cyclists, comfortable zones for recreation, and viewing platforms offering striking new views of the city.
The spaces on the embankment and the pedestrian bridge will follow the policy of creating an accessible, barrier-free environment for all categories of people, including those with limited mobility. The bridge will be equipped with ramps and lifts.
Construction of the bridge will take place in two phases. The first involves construction of a 70-metre-long part of the structure stretching from ulitsa Kulneva to the embankment. This section of the bridge will link the riverbank with the station on the Filevskaya metro line. The second phase will comprise construction of the 120-metre-long pedestrian bridge from the embankment to the planned thoroughfare No. 758 and then on to the Botanic Garden of First Moscow State Medical University.
A highlight of the project is a multi-level amphitheatre that will occupy the entire space under Dorogomilovsky Bridge – from the planned embankment to the new theatre, Masterskaya Petra Fomenko. In addition to the amphitheatre, there will be additional recreation areas, an outside food court, and viewing platforms. Building the amphitheatre under the bridge is an opportunity to create a continuous link between the new part of the embankment and naberezhnaya Tarasa Shevchenko. The bridge will not be an obstacle or a dividing strip but, on the contrary, help create an attractive urban space. 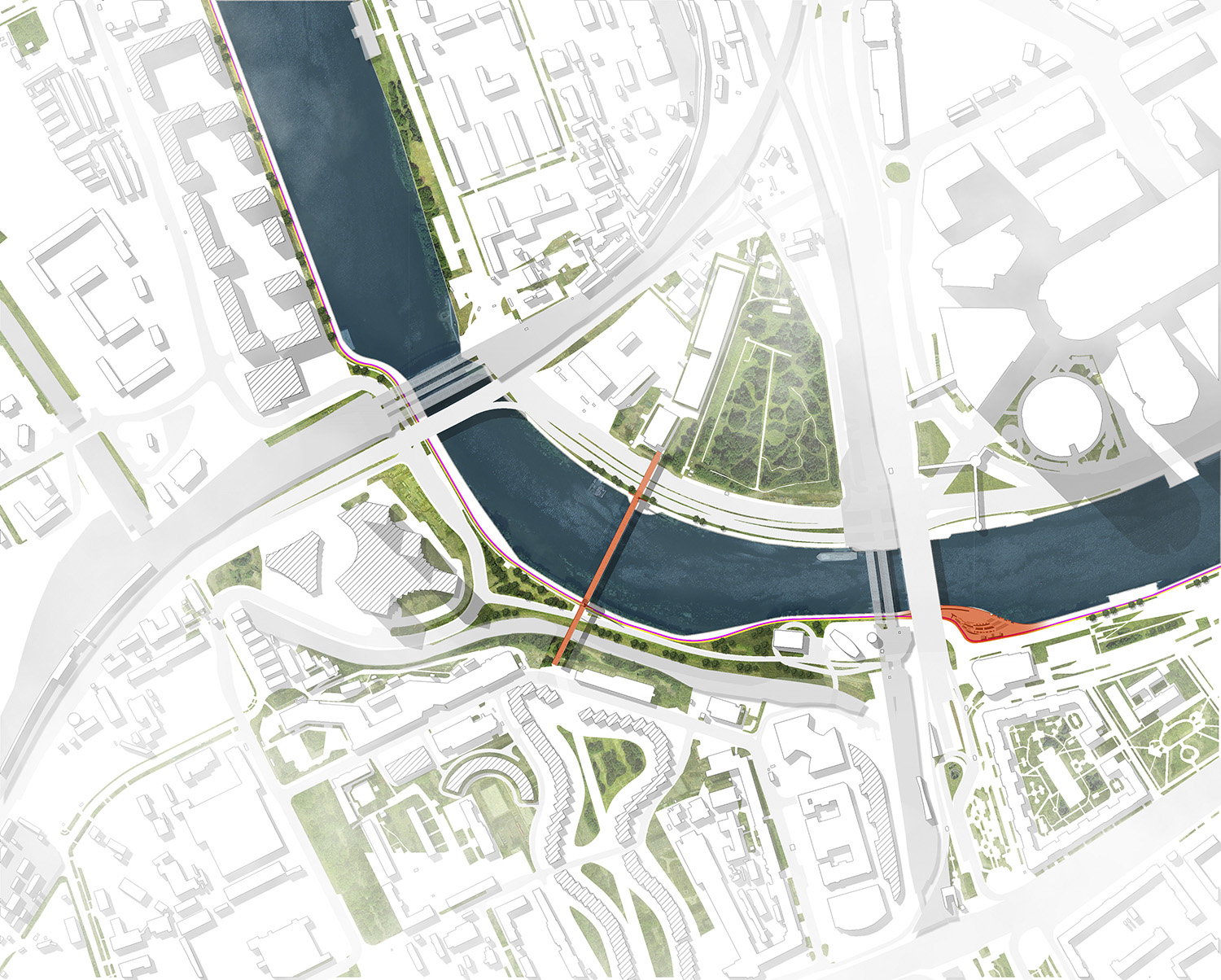 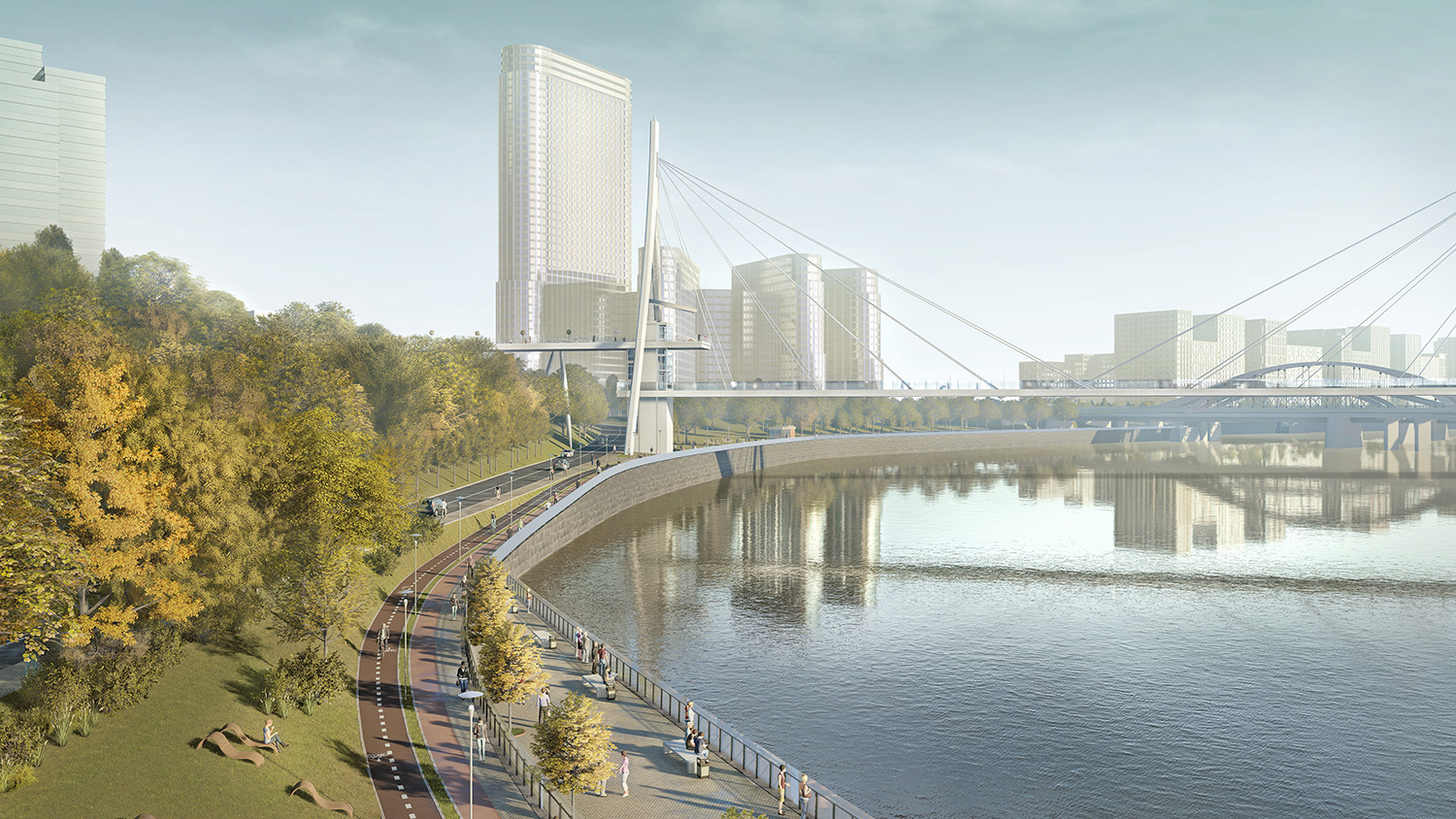 State Research and Design Institute for Urban Development of the City of Moscow is a state organization specialized in Architecture, Engineering Infrastructure, Transportation, Economics, and Social Sciences. Established in 2012 under the Moscow City Government Order it subordinates directly to the Moscow City Architecture Committee. The Institute develops and implements strategies for sustainable urban planning including analysis of environmental and socio-economic aspects of urban development.
Modern city demands a new approach towards the development of urban space. The city of Moscow strives to encompass new principles of urban design and planning in the elaboration of large-scale design and renewal projects. The Institute commits to a multi-disciplinary strategical approach in master planning and works towards the development of livable, sustainable communities and improvement of citizens’ wellbeing by working with all stakeholders of the urban planning process.