Renovation of the 809 Arsenal Relics, industrial transformation for a resort center The 809 Factory is a miniature of the historic arsenals in Western China. In 1950-60's, a large number of military factories were built in Western China, most of them are brick and stone structures, reflecting the characteristics of industrial buildings in Western China in a specific era. With the development of China's economy and industrial transformation in the 1990s, most of these arsenals have been shut down and abandoned, but as a historical record, the architecture still has cultural value. This case is an attempt to maximize the activation of such industrial remains on the basis of protecting historical information.

After the transformation of China's former industrial relics, the main functions are cultural industrial parks and art parks. However, such functions are not applicable to the Industrial Relics in non-urban areas of China’s western regions. The new function of this case is a resort center which includes resort hotel, auditorium, canteen, tea bar, children's leisure space, etc., as well as a Large area of surrounding natural environment, which is a special one in the transformation of Chinese factories in recent years and of great innovative significance for the reuse of Industrial relics in Western China.

The 809 Factory is located in a canyon with karst landform, large site height difference and complex geological conditions. The original construction period spanned the 1950s-1970s, and the construction technology included rubble masonry, brick wall, precast concrete slab, etc. most of them did not conform to the current building laws and regulations, which needed structural reinforcement and reprocessing. The design had to retain most of the facade of the original buildings, but also to meet the new use and regulatory requirements, which brought great difficulties.

First of all, the design protected the industrial heritages and preserved the original appearance of the buildings through structural reinforcement and other measures. After that, the original building spaces were selectively used to implant new functions, incl. changing the original dormitory into hotel rooms, the original boiler-house into auditorium, the original office building and equipment rooms into restaurant, reception center, etc. On this basis, new public buildings are set up at important nodes of the site to form space and visual anchor points, such as hotel lobby, book bar at the entrance of the area, tea bar at the top of the cliff, and so on. The new building and the old building are deliberately distinguished in form and material, forming a dramatic dialogue relationship, and clearly indicating the spatial characteristics and architectural language of the two different historical stages. The main trees in the site are reserved, and the construction of new buildings avoided the trees, forming a symbiotic relationship with the trees. The lighting treatment at night continues the thinking of architectural design, which, based on the overall tranquility, focuses on the treatment of building nodes. 3000K warm white light is used in guest room area while 4000K neutral white light in public area.

The design started from the site planning, considered the integration of architecture, interior, landscape and lighting, retained the industrial characteristics and historical information of the original building to the maximum extent, and carried out transformation and reuse. The main buildings have their own characteristics, yet unified at the same time. For example, the lobby is interspersed by body blocks, materials and color contrast, forming a visual tension and becoming a symbol of the area. On the basis of the original dormitory, the guest rooms can be comfortable by merging rooms, reorganizing traffic and increasing balconies. The book bar forms the bottom layer overhead through the pre-stressed structure, forming the node of the entrance. The tea bar on top of the cliff adopts hyperbolic roof, with the interior space structure exposed, showing the beauty of the structure. The auditorium is transformed from a boiler-house with a collapsed roof. The interior is white, which contrasts with the exterior of the building. The building creates a dialogue with time by adding a new roof and introducing sunlight into the space.

Since the completion of the project, it has been soon recognized by the public and become a beloved short-term leisure destination for Yichang citizens. On the one hand, the project enriches the urban life and promotes the regional economy. On the other hand, it also activates the old factories, so that the idle space can be reused. There are a large number of such factory sites in China, and the project provides inspiration for the reconstruction of other factory sites. 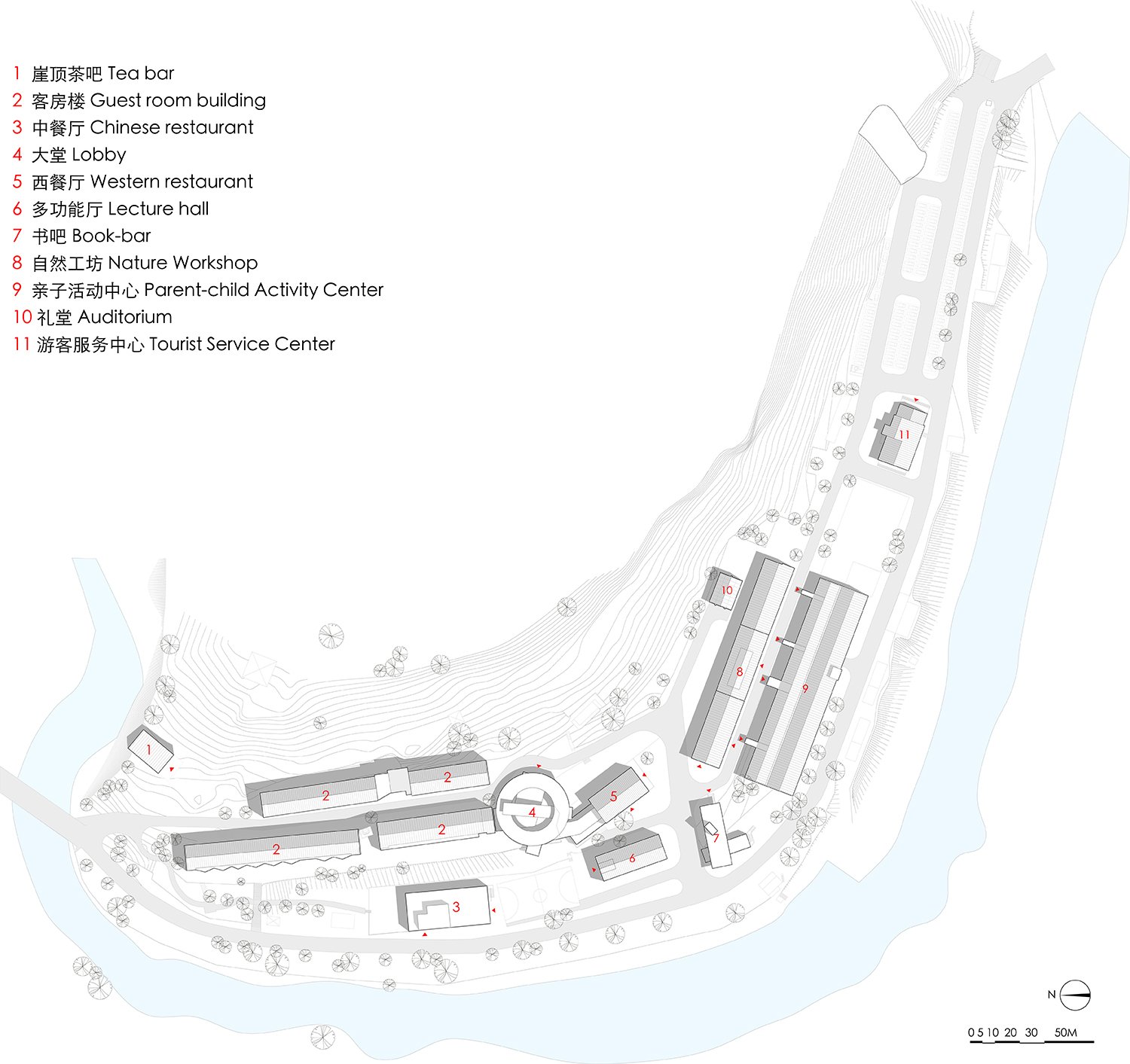 Founded in 2012, we’re an architectural design firm with supports from authoritative academic institutions incl. Central Academy of Fine Arts, Tsinghua University, and China Architectural Society. Engaged in interdisciplinary research and practice incl. urban renewal, architectural and interior design, exhibition and curatorial, lighting and art, we emphasize humanism, dialogue between history and contemporary, and interaction between natural environment and regional culture. We have been being dedicated to rural architectural design especially in undeveloped areas of China, employing methodology of micro intervene, which is widely used in typological study that allow the revival of rural villages and communities. We regard preliminary planning, construction on site, and linkage between design phrase and media communication, as an interrelated whole, and believe architectural design should go beyond self-determination, embrace relevant disciplines, and explore ways to integrate them.