On the 464 m² corner site between Greifswalder Str. and Heinrich-Roller-Str. in the Berlin district of Pankow, Prenzlauer Berg, an office building was created whose expressive, lively main façade with its floor-to-ceiling, square grid structure of light architectural concrete prefabricated parts immediately strikes the eye.

The structure comprises six full storeys, which can be used per rental unit as flexible combinations of open-plan offices, individual offices, conference and meeting rooms as well as coworking spaces. On the ground floor there is an office unit with meeting areas and open-space workplaces. The top floor is set back by approx. 1.60m on the street side. The roof area, which is accessed via the 5th floor, is greened and partly designed as a roof terrace. The basement is intended for parking spaces for cars, bicycles and technical rooms. In the courtyard there is a one-storey extension, built in solid construction. Additional bicycle parking spaces are located in the courtyard. The remaining courtyard area will be landscaped.
The new building, which is used as a modern office business centre, follows the line of the building on the street side and connects to the fire walls of the neighbouring buildings while maintaining the spacing in the courtyard and exploiting the maximum building depth. All new building parts have flat roofs.

The street façade on the ground floor consists of large-format insulating glazing in mullion-transom construction. From the first to the fourth upper floor, the façade is constructed in a square grid of architectural concrete. The slightly twisted pillars and floor slab strips meet alternately at either a high or low point and form a coherent, dynamic, organic-flowing structure. At the high points of the grid structure, the façade protrudes 50cm above the building line. The inner courtyard facades were realized as plaster façades with circumferential window bands with metal railings. The roof area with its restrained glass façade forms the clear, calm end of the building.

The windows on all floors are floor-to-ceiling windows, designed as a turn/tilt element and a fixed-glazed element.

The representative foyer of the main entrance is accessed from Heinrich-Roller-Straße. As a special design element, the lighting is integrated into the ceiling, backlit showcases in the walls are intended for the exhibition of works of art. 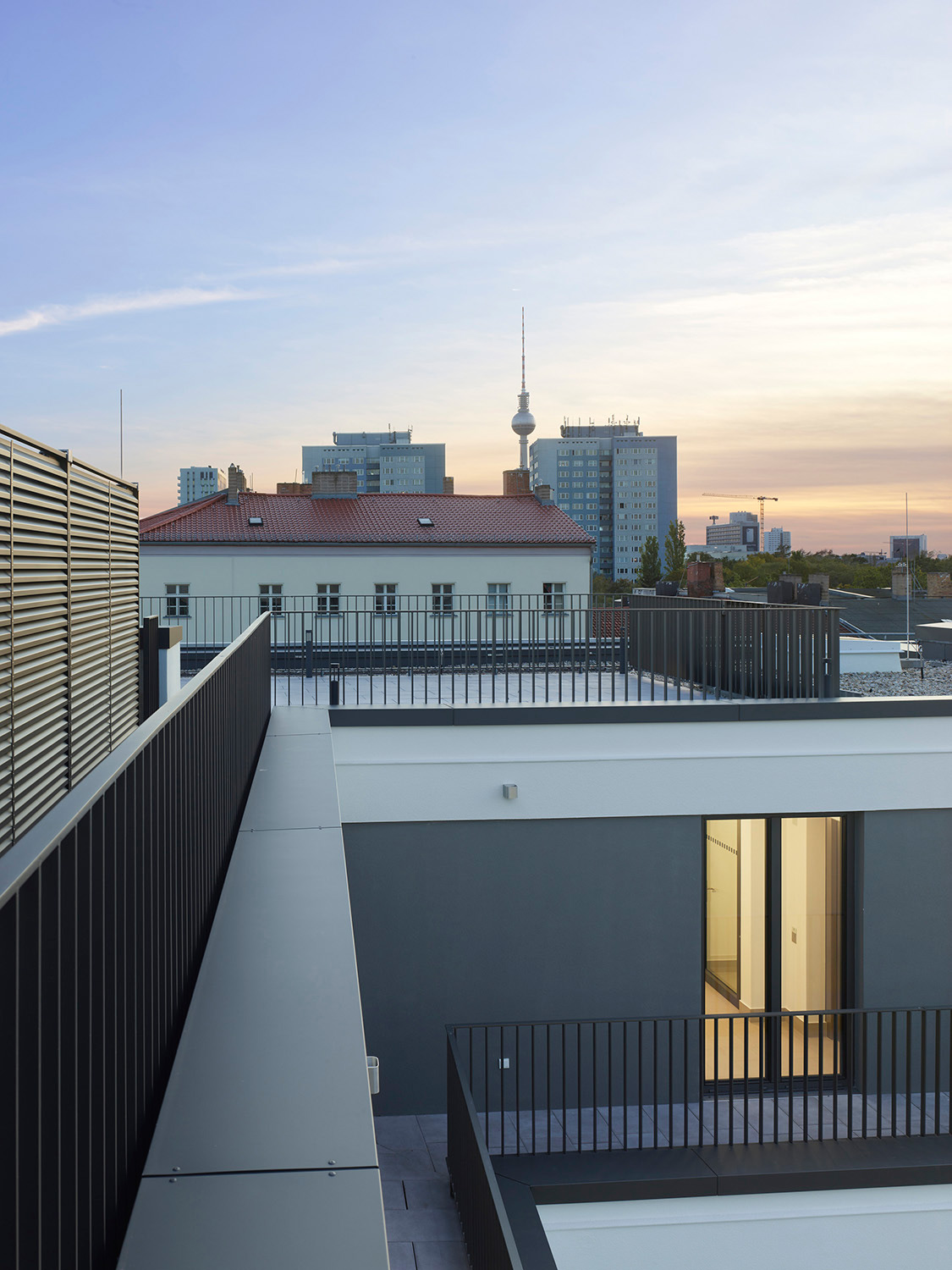 Sergei Tchoban, born in Saint Petersburg, is a Russian-German architect., He studied architecture at the Russian Academy of Arts in Saint Petersburg. He is leading partner of TCHOBAN VOSS Architekten, Berlin as well as director of the architectural studio SPEECH in Moscow. Tchoban designed and built several internationally known buildings, such as the Federation Complex in Moscow. He curated twice the Russian Pavilion for the Architectural Biennale in Venice and in 2015 he was the architect of the Russian Pavilion for the EXPO in Milan. 2018 Sergei Tchoban received the European Prize for Architecture by Chicago Athenaeum: Museum of Architecture and Design.