The Rajasthan School comes from the organic old cities Imbibing the organic character of Indian villages & old cities, the Rajasthan School is a low-rise three-level school with open, enclosed and semi-enclosed spaces of varying volumes. It is situated in a township developed by a well-known Indian Cement manufacturer for the children of the staff working at their plant, in a remote area of Rajasthan.
Taking cognizance of the extreme desert climate of its location with temperatures in excess of 35°C for most of the year, each of the classrooms are north oriented to derive indirect sunlight through the day, and enclosed in angled vertical walls. These vertical walls act as sun breakers to reduce direct heat gain from the east, west & south sides generating cooler internal spaces.
The auditorium, primary school and administration space occupy the southern side of the plot opening into a large semi-sheltered courtyard towards the north beyond which the secondary school classrooms, library & cafeteria are located.
This semi-sheltered courtyard has multiple angular pathways, connecting the two parts of the school with landscaped play spaces that foster engagement. Traversed by a series of linear trapezoidal frames and sun-breakers, this focal area has a constantly changing shadow pattern depending on the sun direction throughout the day.
The layout is intentionally fragmented allowing open landscaped spaces to be interspersed with the school’s learning spaces. The entire school opens towards an existing multipurpose playground & athletics track on the northern side.
The entire circulation is through open naturally ventilated corridors traversing & skirting the focal semi-sheltered landscaped court in the center.
The complete electrical power requirement is generated by the residual energy of the cement plant nearby. Solar panels are also installed for additional energy usage. There existed no vegetation on site, thus territorial plants have been planted, which would take less water to grow and reduce the burden on the water supply. In addition, the rain-water from the terraces is recycled & reused through the installation of rainwater-harvesting systems under the garden areas. The building by its design is thus extremely energy efficient.
The organic layout creates a different character to each part of the school orienting each space with different views & different perceptions.
The Rajasthan School derives its character from the organic old cities, with an informal layout, interspersed open & enclosed volumes, designed in response to the hot climate, creating a school that is exploratory in multiple ways. 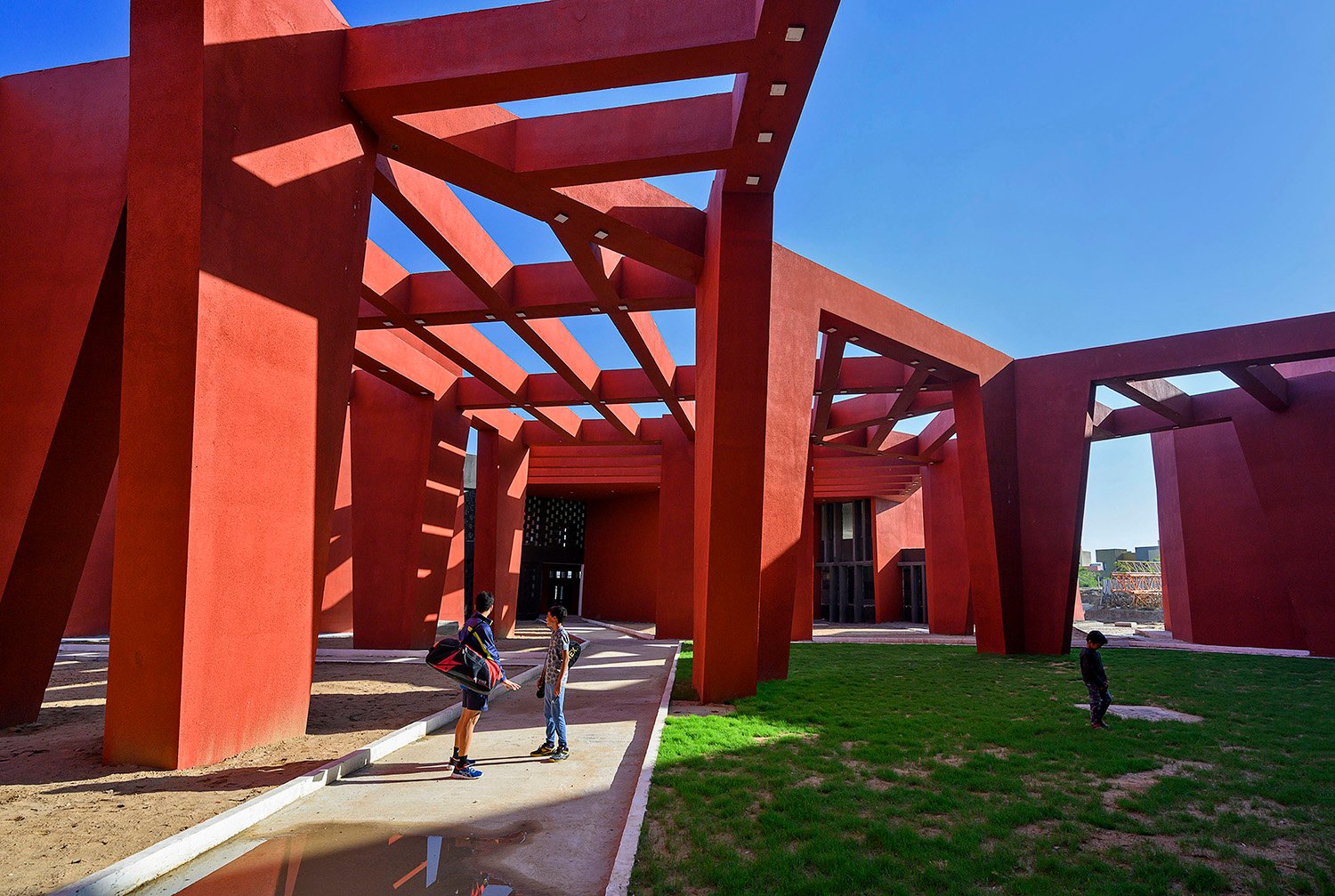 Winning the World Architecture Festival’s Best Housing Project of the Year 2018 in Amsterdam and the World’s best residential building in the LEAF Awards, London, the firm has won over 225 awards including 150 international awards and 80 National awards.

The firm founded in 1992 has won architectural projects in Spain, Montenegro, Mauritius, Abu Dhabi, Dubai, Montreal, Oman and Dallas in addition to projects in 40 Indian cities.

With a firm strength of 72, evolving design solutions that are contextual and creating spaces that revolutionize the way they are experienced form the essence of the firms design philosophy.