INTRODUCTION
The Yangtze River drains one-fifth of China’s land area. Revered as the mother river, it has nurtured China’s history, culture, and economy for millennia. Despite advancements in engineering that attempt to tame the Yangtze, damaging floods remain an annual occurrence. Wuhan, central China’s largest city, is re-envisioning its waterfront park to not only accept floodwaters, but to embrace them as a driving force shaping its public realm. The master plan to improve and expand the Wuhan Yangtze Riverfront Park leverages the river’s dynamic forces to cultivate a rich regional ecology, and rethinks traditional approaches to coexisting with an ever-changing river.

FORGED BY FLOODS
Wuhan’s urban vernacular has been intertwined with the Yangtze for over 1,800 years. Dependent on the river for drinking water, trade, and farming in its fertile sediment, Wuhan and the Yangtze forged a symbiotic relationship until rapid urbanization and higher levees separated the river from the city. After a century of industrial exploitation and urban expansion, the city is piloting a movement to reconcile with the river. Dictated by water levels that fluctuate up to 24 feet, public use of this beloved waterfront space ranges from precarious to perilous. Interaction with the river is so deeply embedded in the culture of Wuhan, however, that people frequent the riverfront park even when it is flooded. The reimagined Yangtze Riverfront Park celebrates this strong heritage, redesigning spaces to celebrate the river’s spontaneity safely. Park programming adapts as water levels rise, providing a diversity of recreational experiences that are intimately tied to the seasonal rise and fall of the Yangtze’s waters.

ENHANCING ECOLOGY
The river’s mudflats play a critical role in supporting biodiversity, providing feeding grounds for migratory birds and spawning habitats for fish. Yet mudflats are among the world’s most vulnerable ecosystems, and the sediment flux of the Yangtze River has dropped by 90% over the last forty years. By strategically removing levees, the plan allows for frequent flooding to replenish nutrient-rich sediment and nurture hundreds of acres of mudflats in the heart of Wuhan. Currently dominated by a homogeneous field of phragmites, strategic dredging reestablishes heterogeneous patterns of microenvironments that host a variety of distinct wetland ecosystems. Nuanced topography and fluctuating water levels support complex plant communities ranging from emergent marshes to vernal pools. Sinuous secondary streams are graded to emerge during mid-high water levels and provide passages for aquatic wildlife and safe corridors for kayaking, allowing for a tranquil experience amidst tall marsh grasses even when the Yangtze roars. In dry months, these streambeds function as informal pathways slicing through dense grasses and providing a sense of discovery.

REPURPOSING INFRASTRUCTURE
Although most heavy industrial uses along the Yangtze have been relocated, 68 iconic piers and barges within the park remain. Despite the City’s initial strategy of removal, the plan repurposes them for a host of programmatic opportunities including community gardens, performance spaces, and a floating promenade which rises and falls with the river. Additional relics including abandoned bridge spans, ramparts, and other outdated infrastructure are reimagined as public art to recall the river’s industrial legacy.

PUBLIC ENGAGEMENT & OUTREACH
A comprehensive public process resulted in feedback from over 65,000 people throughout Wuhan who provided programming ideas and influenced design iterations. Open meetings, site tours, and a community arts program invited residents to convey their vision for the park, while a bespoke website kept the public informed on the park’s design progress and solicited feedback from citizens, scholars, and design peers. Built upon a strong consensus from sustained public outreach efforts, the reimagined Yangtze Riverfront Park strives to create a socially inclusive, culturally relevant, and ecologically meaningful waterfront that embraces the philosophy of living in harmony with the dynamic river. 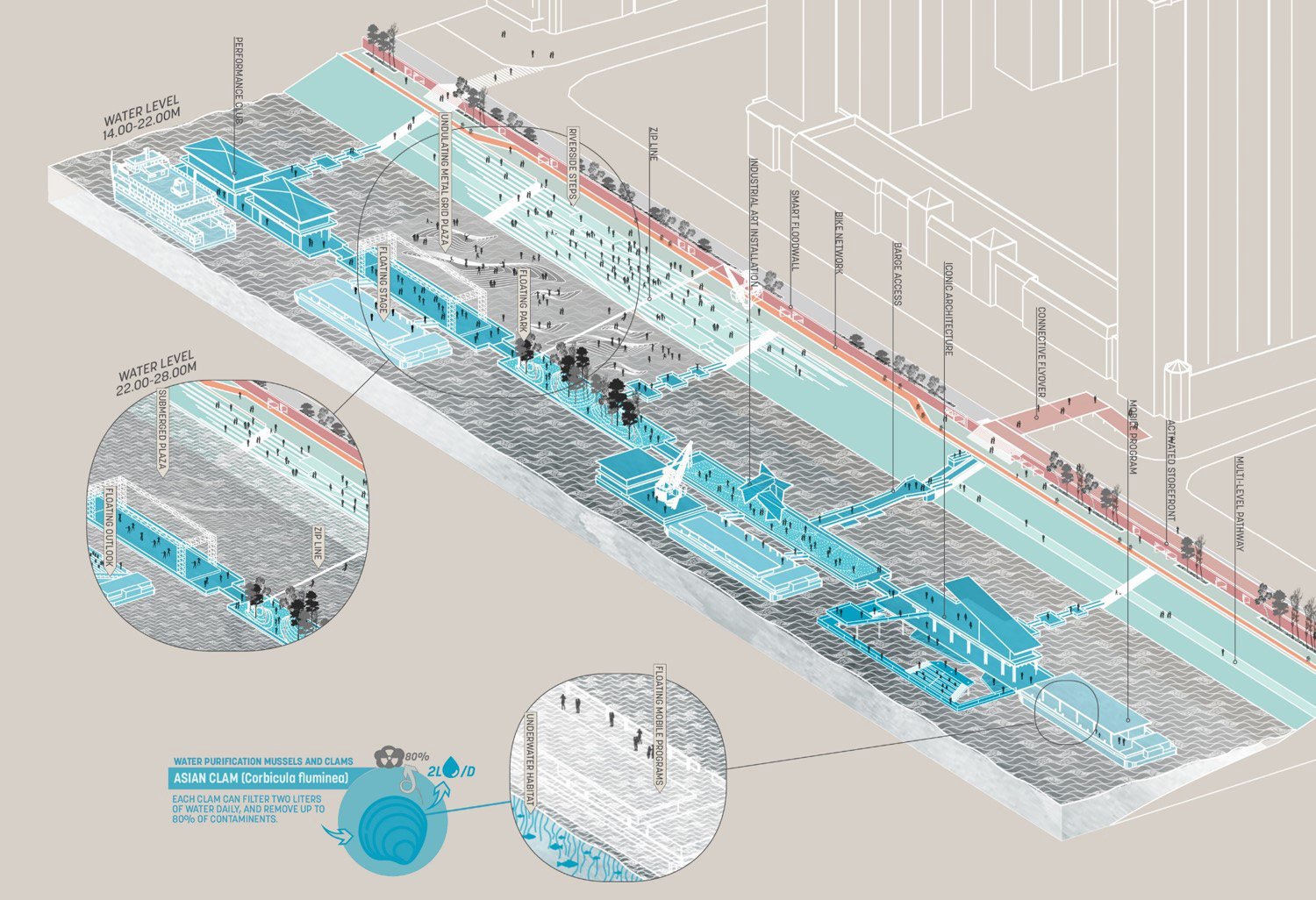 SASAKI: Better design, together.
At Sasaki, we believe defining the future of place is a collective, contextual, and values-driven exercise. Through our 67 years of practice, we have affirmed that diverse perspectives, blended disciplines, open exchange, deep engagement with clients and communities, commitment to history and context, curiosity about new ways of thinking and making, and expert facility with data and emerging technologies will always unearth stronger design than one vision hewn by one author ever could. From our offices in Boston and Shanghai, our practice comprises architecture, planning, urban design, landscape architecture, graphic design, interior design, and civil engineering, as well as financial planning and software development. Among these disciplines, we collaborate in equilibrium, and each is recognized internationally for design excellence.