Institute Of Pharmacy, the continuation of the Paracelsus Medical University The Paracelsus Medical University in Salzburg was founded in 2004. In 2017 the curriculum was expanded to include the study of pharmacy. The new Institute of Pharmacy represents a continuation of the north-south directed volumes of the buildings of the STADTWERK Life Sciences Campus area. The new city body thus consolidated, with the Institute of Pharmacy as the keystone, provides a connection along Gaswerkgasse to Mülln, where a recognisable connection between Salzburg's old town and Lehen is established across the railway embankment.

The Institute of Pharmacy is composed of the following departments: Clinical Pharmacy, Pharmaceutical Biology, Pharmaceutical and Medical Chemistry as well as the department for Pharmaceutical Technology and Biopharmaceutics. The institute focuses its research on the development and testing of agents, the characterisation of new target structures for pharmaceuticals as well as on biological analysis. The aim is to train competent pharmacists who are well prepared for market requirements, pharmaceutical practice and research.

The concept of the laboratories and institute rooms is a continuation of the Paracelsus Medical University on the opposite side of the street, which was completed in 2013 and also planned by Berger+Parkkinen. A particular challenge lay in the question of how the new building could interpret the special feature of the Paracelsus Medical University and the three sister buildings of the STADTWERK Life Sciences Campus, the undulating mirror undersides of the cantilevered buildings. The answer was to adopt not the form, but the concept.

The idea of a semi-public basement floors is continued in the Institute of Pharmacy with the construction of the urban typology of a large columned hall. The centre of this large hall is an amphitheatre. Surrounded by glass walls, it forms the transparent heart of the building. The massive arches and pillars span the entire ground floor and connect the various areas of the auditorium, seminar rooms, foyer area and staircases. The glass walls allow all parts to merge into an open space. Typologically, the ground floor resembles a three-aisled "basilica", whereby the western row of columns follows the sloping line of the old ground boundary. Thus resulting in the entrance hall taking on a conical shape through a series of different arches. The conical course of the projection to the forecourt is also created. This small incline opens the strict system of the pillars and creates a formal connection to the architecture of the Paracelsus Medical University. This dynamic is particularly emphasized by double-high arches in the area of the staircases, which make the transition from the pedestal to the floors legible from the outside.

As with the Paracelsus Medical University, the two main staircases are of great importance. In particular, the large staircase is planned as a three-dimensional communication space. All laboratories are located on the upper floors and determine the internal structure of the building with its functional, large corridor depths. Lecture and practice rooms as well as offices for scientific staff and administration complete the programme. A clear withdrawal of the building in the east from the third upper floor appears like a diagonal reflection of the western withdrawal of the arcade to the forecourt. These recesses regulate the scale of the building and enable precise integration into the context. At the same time, these two situations offer the users of the building welcome open spaces in the form of an arcade and a terrace. 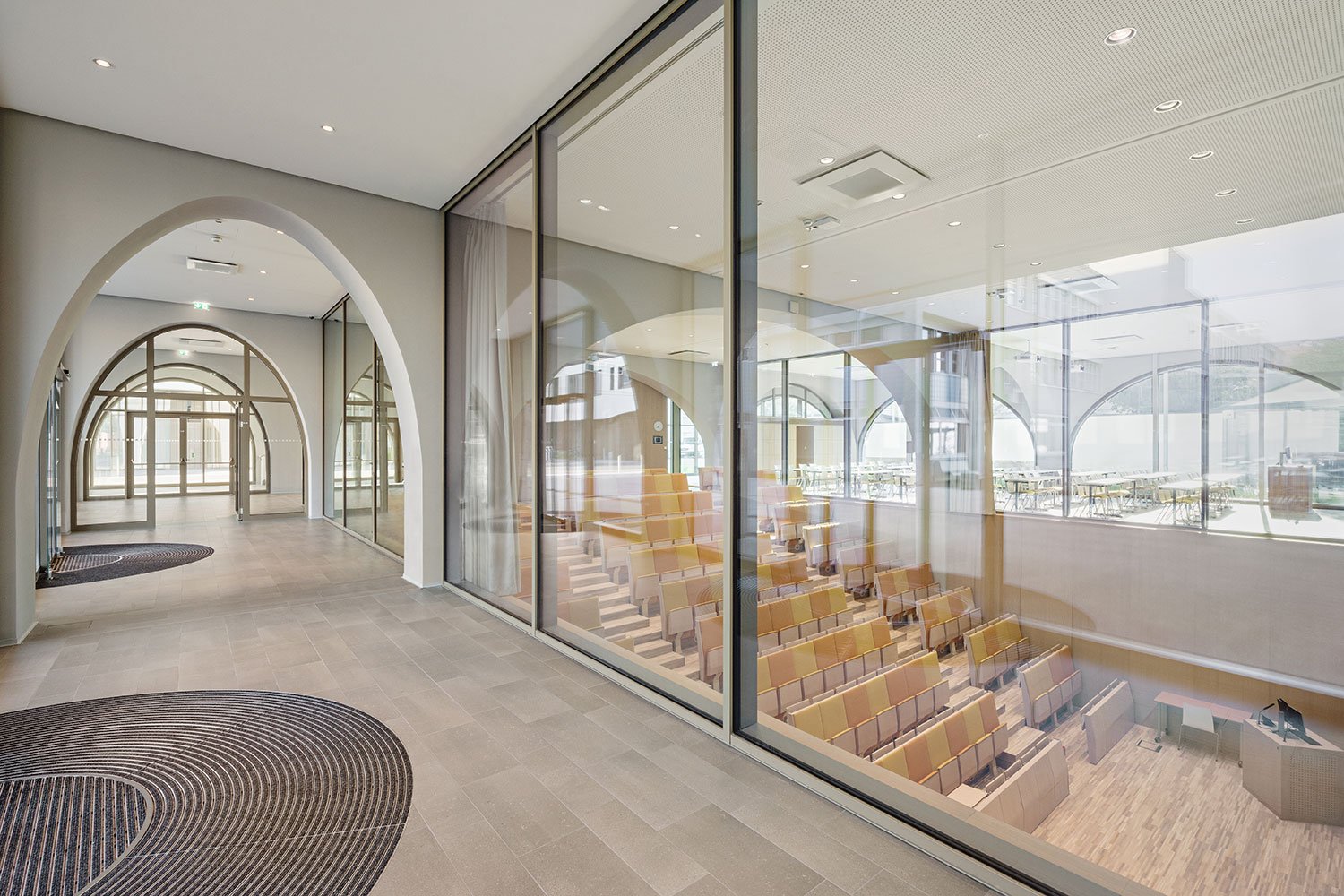 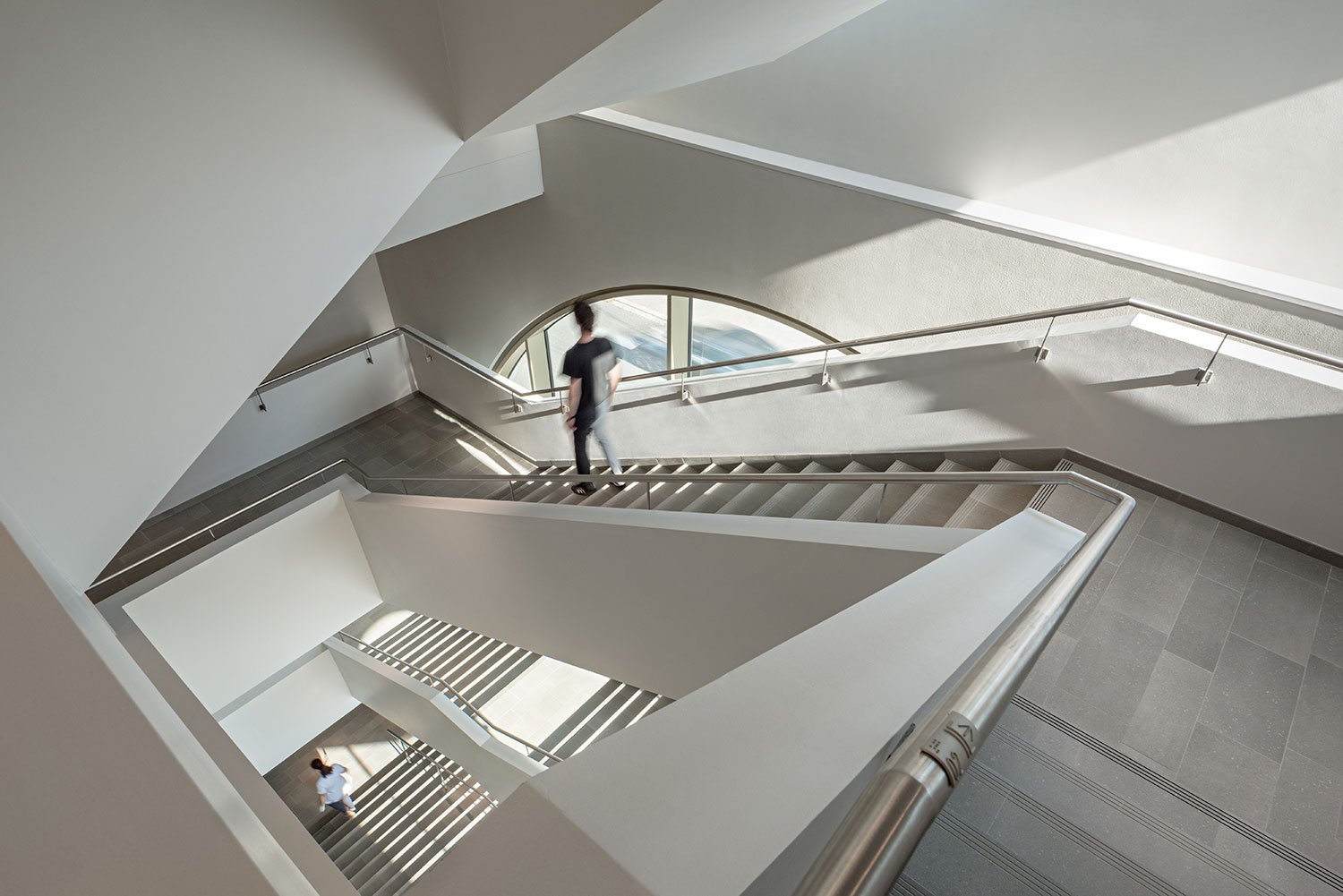 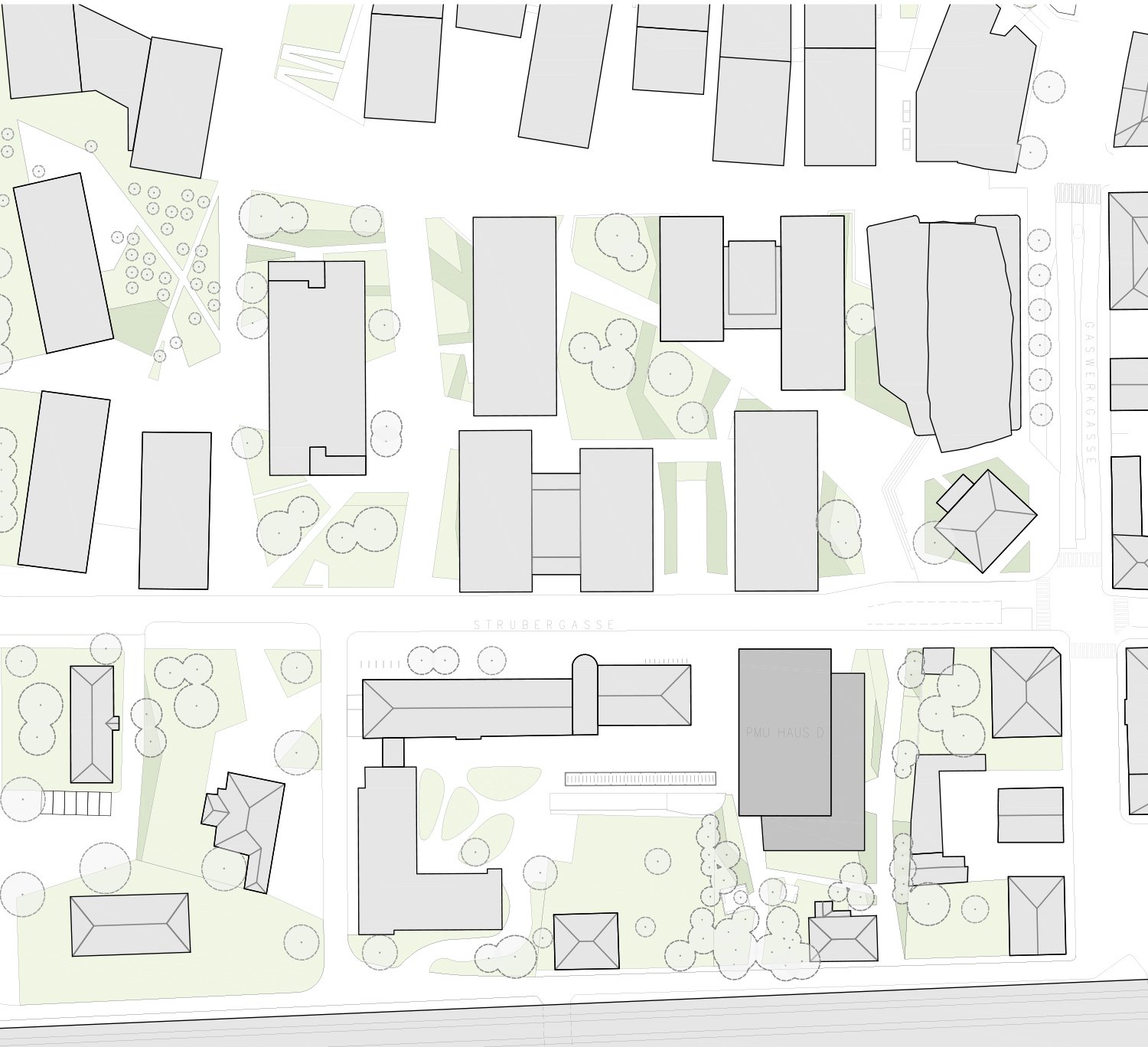 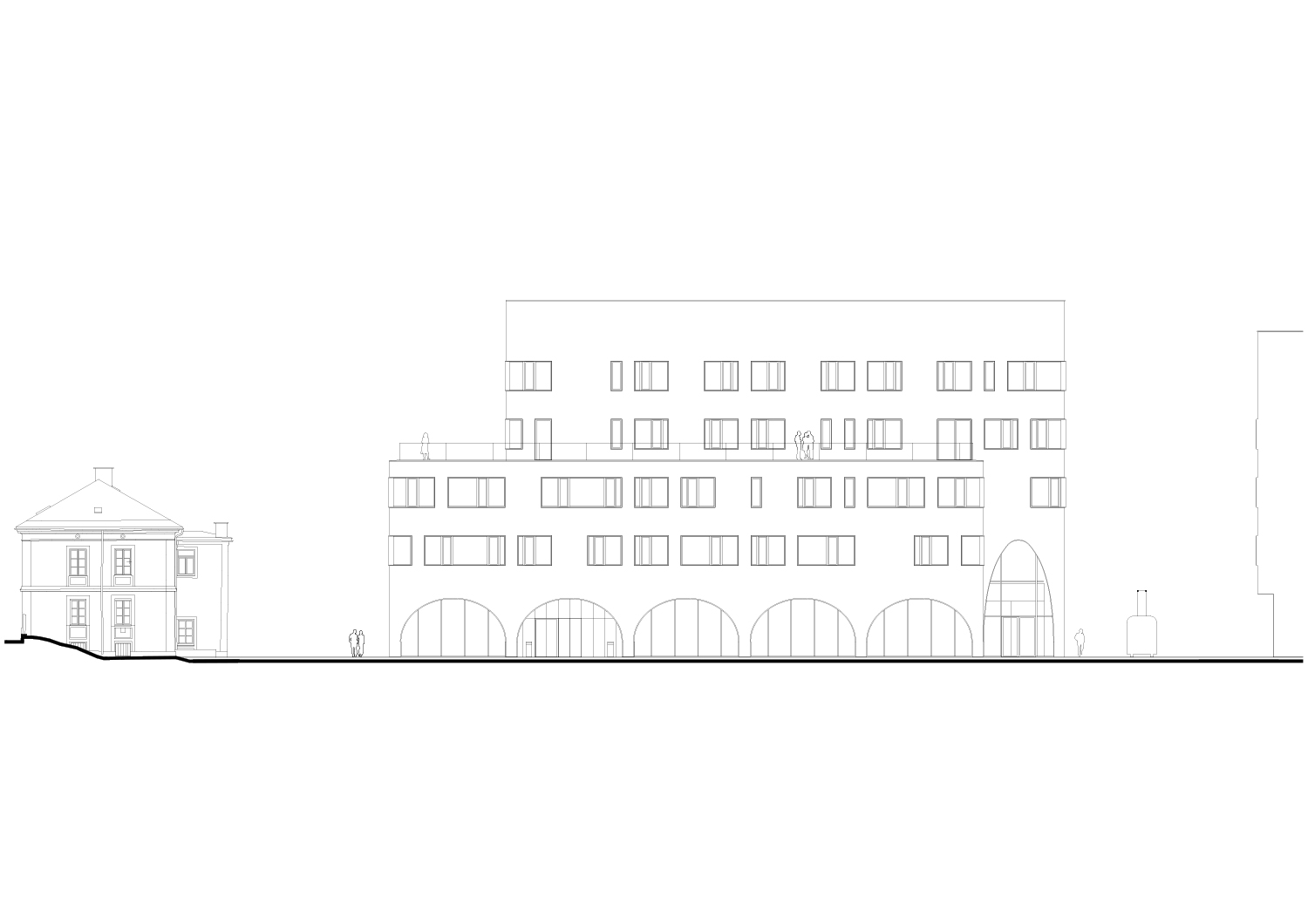 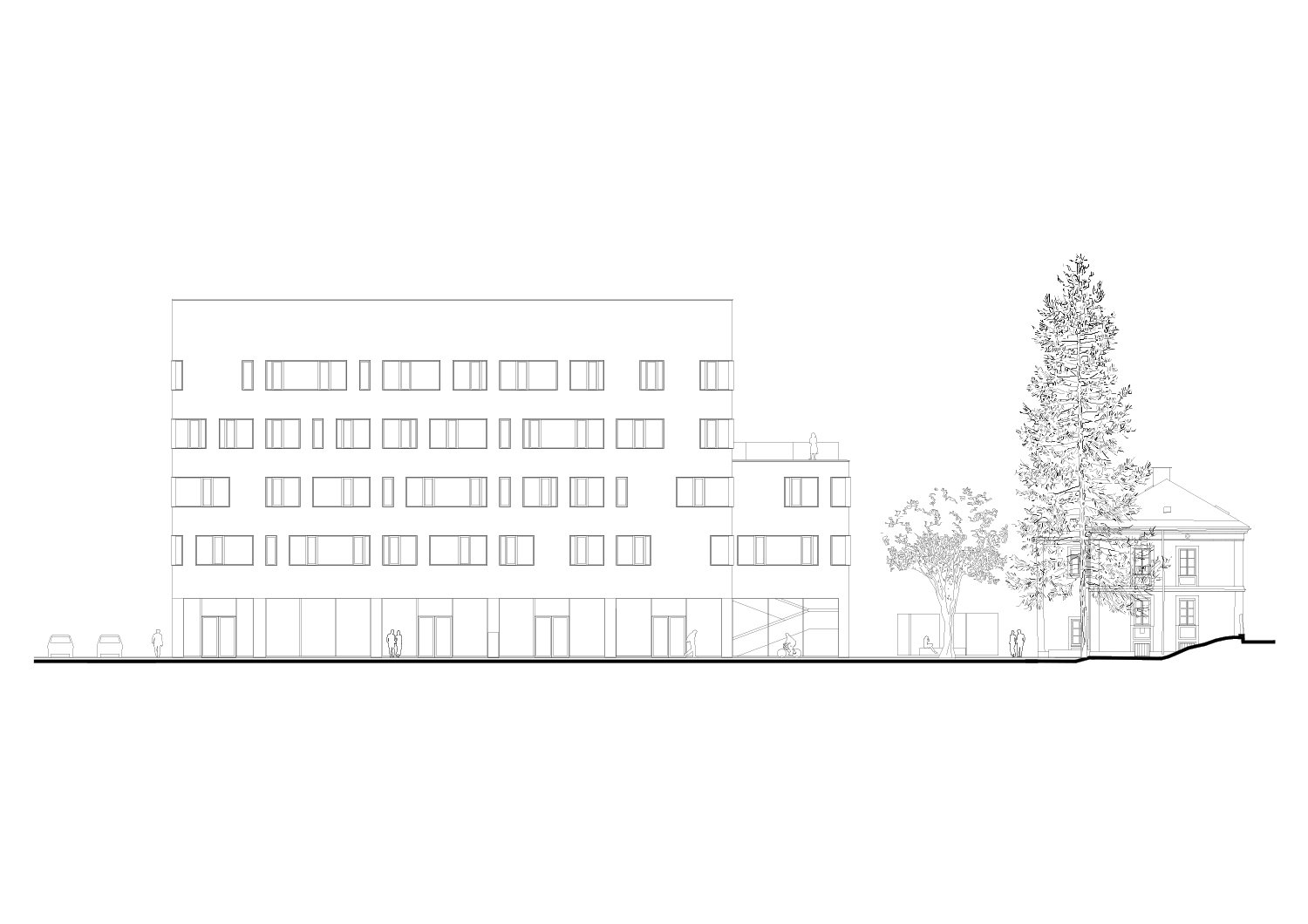 In 1995 Tiina Parkkinen and Alfred Berger founded Berger+Parkkinen Architekten with offices in Vienna and Helsinki. In the same year they won the international competition for the Nordic Embassies in Berlin. Numerous successful competitions and distinctions followed, including finalists of the Mies van der Rohe Awards, short-listed of the State Awards for Architecture and Sustainability. Regular lectures and exhibition activities in Europe, India, Mexico, and USA, i.a. Venice Architecture Biennale, London Architecture Biennale, Galerie Aedes, Berlin. Berger+Parkkinen fabricates individual and sustainable solutions to a wide range of programs. The office has vast experience in all planning phases and as General Planner. Transdisciplinary approach to each project combines different professionals working on innovative ideas. Respect for various backgrounds and cultures is a key feature of the office philosophy.