A Diptych for Camerino: Reconnecting Community through Culture Like many hilltop towns, Camerino is perched atop a rocky outcrop and enclosed by high defensive walls. The jagged outline of the historical city center juts out from the bulwarks, melding ground, wall and town into one solidified artefact. And yet, the very solidity of Camerino is what belies her fragility. With the most recent seismic waves of October 2016, the bedrock has shaken violently only to betray Camerino time and time again.

In the aftermath of the earthquake, the town is defiantly intact, but her newly acquired ‘red zone’ status has reduced her to a ghost town. The only inhabitants are the excavators and bulldozers whose numbers and presence pale in comparison to those digging tirelessly away below the city’s embankments in the appropriation of new, safer grounds for the displaced. Neatly terraced earthworks swathe the rolling hills in a Christo-like installation of orange—the perforated, soft fencing of these newly sprung sites of construction constitute the new Camerino. These structures are only temporary, fine examples of militaresque encampments. However, as time will tell, they are most likely here to stay.

While earthquakes cause destruction and the de facto rebuilding of that which crumbled, they are also largely responsible for the rapid propagation of new, anonymous buildings. Two important questions emerge in the struggle to strike the right balance between the pre-and post-seismic conditions and the staggered timelines of reconstruction: What about the old? What about the new? While Burri buried the remains of Gibellina in a tragically poetic monument, the new Gibellina is but a shadow of her former self. Camerino, in the midst of reconstruction, is busy building her own shadow.

Tucked into the underbelly of the medieval town, however, already lies a second, shadow city. Extraordinarily intact, this place of cavernous wonders safeguards the artefacts of Camerino’s historical and cultural patrimony. Relics, paintings, and antique books, albeit rescued, languish in their subterranean safe haven only to become imprisoned by their inaccessible chambers in the long wait of reconstruction.

The project grapples with the fragility of Camerino and the present-day dispersion of people, places and things with two iterations—one inside the city, the other outside. Together, the two sites generate hybrid spaces in one, single trajectory for the community. The first intervention huddles up close, just outside the medieval archway of Porta Bonaparte, with a hybridized ‘rural urbanity’ that defines the axis connecting old Camerino with her improvised alter ego some 2 km away. The second intervention tackles the inertia of the historical city center at the site of Camerino’s oldest monument, the 13th century church of San Francesco. A new passageway pulls together the existing urban fabric with a series of new, emergent figures and subterranean places, connecting Camerino with her adjacent, outlying territories.

The dense encampment of thatched roofs at Via Madonna dei Carceri plays off the tectonic and temporal qualities of the straw sheaf, conjuring up the collective image of the region’s agrarian landscapes. Stepping lightly across a series of earthbound platforms, the clustered volumes grab hold of Camerino’s fraying community to fill the present-day void of spaces for cultural and social exchange. As the renewal of the historical city center gains footing, these thatched volumes reduce in number and leave behind their supporting structures where a crossover community of academics, entrepreneurs, and associations can thrive.

On the site of the (to-be) demolished former courthouse of the 1970s, a newly formed complex draws together old and new, above and below ground spaces to house a civic library. The library combines all of the closed, inaccessible city and university libraries, state archives, reading rooms, event and gathering places that have been time and again damaged, compromised and ultimately closed. The central space of the library is a safe place, a large, subterranean hypostyle hall that recounts the stratification of Camerino’s history whose seemingly forgotten future can finally be set free. 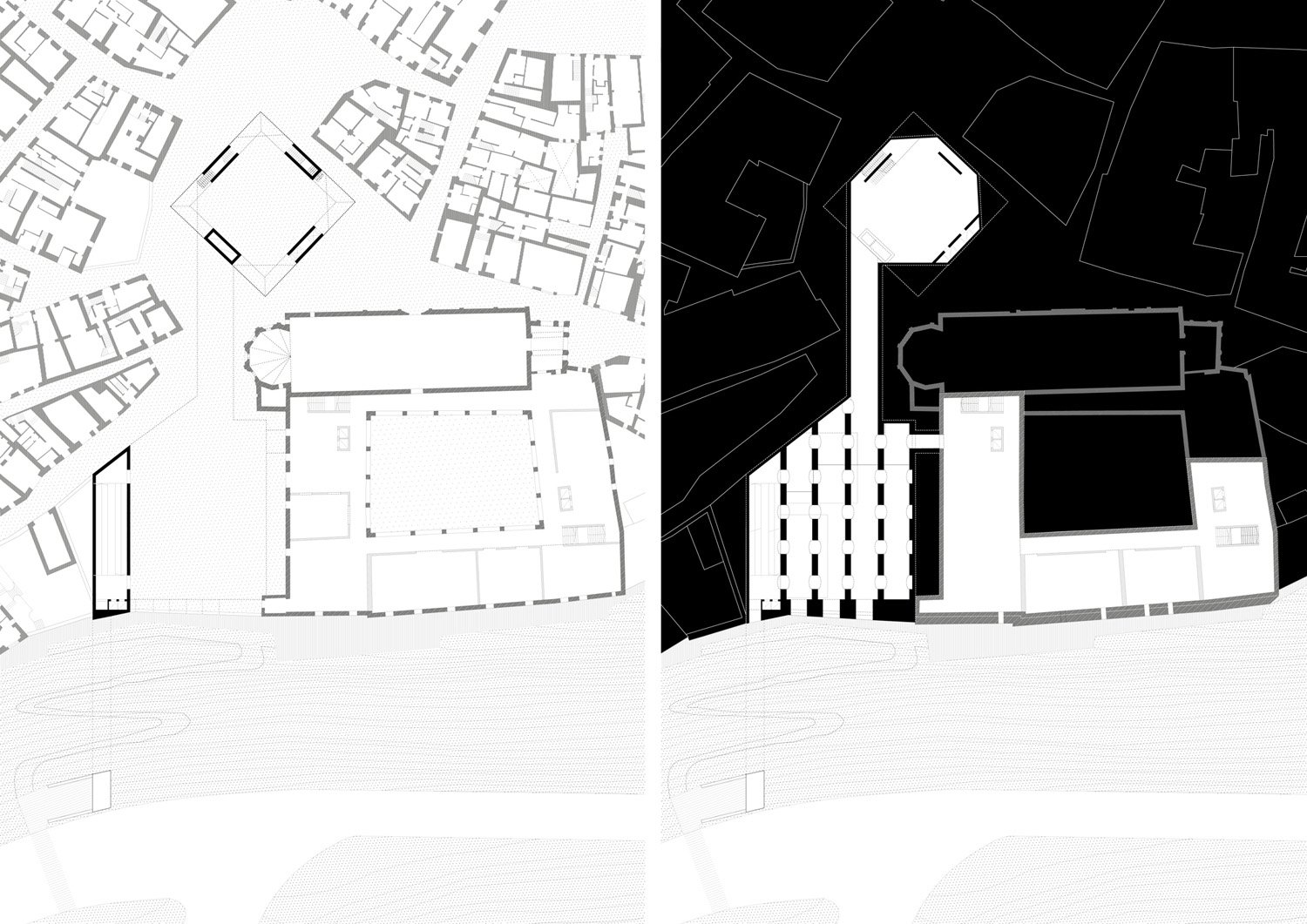 MoDusArchitects, led by Matteo Scagnol and Sandy Attia is an architectural practice distinguished by a heterogeneous approach to the field of architecture that fuses the founding partners’ different cultural backgrounds into one platform for bold design. The foundation of the practice lies in a belief in making buildings last and be loved, favoring a disciplined alliance between crafted tectonics, inventive engineering and hybrid programmatic solutions. MoDusArchitects was awarded the 2013 Italian Architect of the Year, special jury prize in recognition of their “extraordinary capacity to respond to specific and variegated topics with dexterous spatial and formal solutions that are able to generate new figures in stratified territories and to produce unexpected reflections on their histories.” The practice’s award-winning body of built work is complemented by a number of research-based projects that affirm their commitment to the broad, multi-faceted range of architectural inquiry.