The project for a new Sport Palace for the city of Fier follows RI-GJANICA, the process of urban regeneration of the city centre started with the ideas competition launched by the administration back in 2017, a proposal that reconnects city’s present with its future, bringing back its historical and cultural peculiarities.
This process started from an identification of the city’s weaknesses, trying to solve them reactivating a relationship between the community and its social and historical backgrounds. New cycle paths, public spaces, green areas and the waterfront amphitheatre give the city back to its inhabitants, following the steps of successful examples from Europe’s recent history. The project combines spatial, social and cultural issues of the contemporary city, focusing on the link to the river and the new multifunctional Sport Palace on its south; its presence gives new relevance to this part of the city and restores a balance between the two banks of the Gjanica river.

The new Sport Palace comes from the need for Fier of a representative building including different activities, and embodying a constant and active use of the southern part of the city. The building will not act just as an architectural object, but as a neighbourhood-like structure with public and private spaces and activities.

The general shape of the building is generated by physical and non-phyisical context: main urban axes, squares and open spaces, the pedestrian bridges, the river, the waterfront and its public amphitheatre trace a form that recalls a complex system of relationships.

The 2 storeys horizontal volume contains the main functions for the community, such as stores, little shops, bars and restaurants. A sport field for a 2500 people audience stands out as an inner closed volume with translucent skin, that includes service spaces and vertical distribution, making all the functions communicate in non-direct way; the indoor paths cut through the body and act as new pedestrian axes, allowing direct connections between all the public spaces around the sport palace.

The big green flight of steps on south-west leads people directly to the roof of the main volume, giving back to the community the ground space occupied by the building. The terrace is conceived as a vibrant space facing the waterfront, a gathering square accessible all day long; it is entirely walkable and hosts a sport field, playgrounds, green areas, public spaces, covered paths along its perimeter and it’s directly connected with the food area and the tower at level three.

On south-east, the 20 storeys tower raises from the volume’s corner, aa new landmark with a strong contemporary look. It is a mixed-use building embodying public and private functions from its base to its top: sport services, offices, apartments, hotel, spa and restaurants.

The detached roof is a key element for the whole project, it sorrounds the building and recalls a bigger virtual shape, acting both vertically and horizontally. Its modular shading system creates porticos, filter spaces and covered paths all along the perimeter, both at ground level and terrace level, while its generative grid gives measure to open spaces and elevations.

The building it’s sorrounded by public spaces, paths and green areas, recalling and connecting with both the context and the internal distribution of the Sport Palace. The water pools on south help identifying the sport field and its accesses, as they give importance to it as the main function of the whole project; moreover they have climatic and rainwater recovery purposes.

The underground floors include services for the sport field, such as gyms, infirmary, storage spaces, and both private and public parkings.

The new Sport Palace will have a strong relevance for the city of Fier; its multifunctional program and its public-private hybrid nature make it not only an architectural artifact, but a neighbourhood-like organism, gathering people and different functions, public and private spaces, and therefore an active system of relationships. 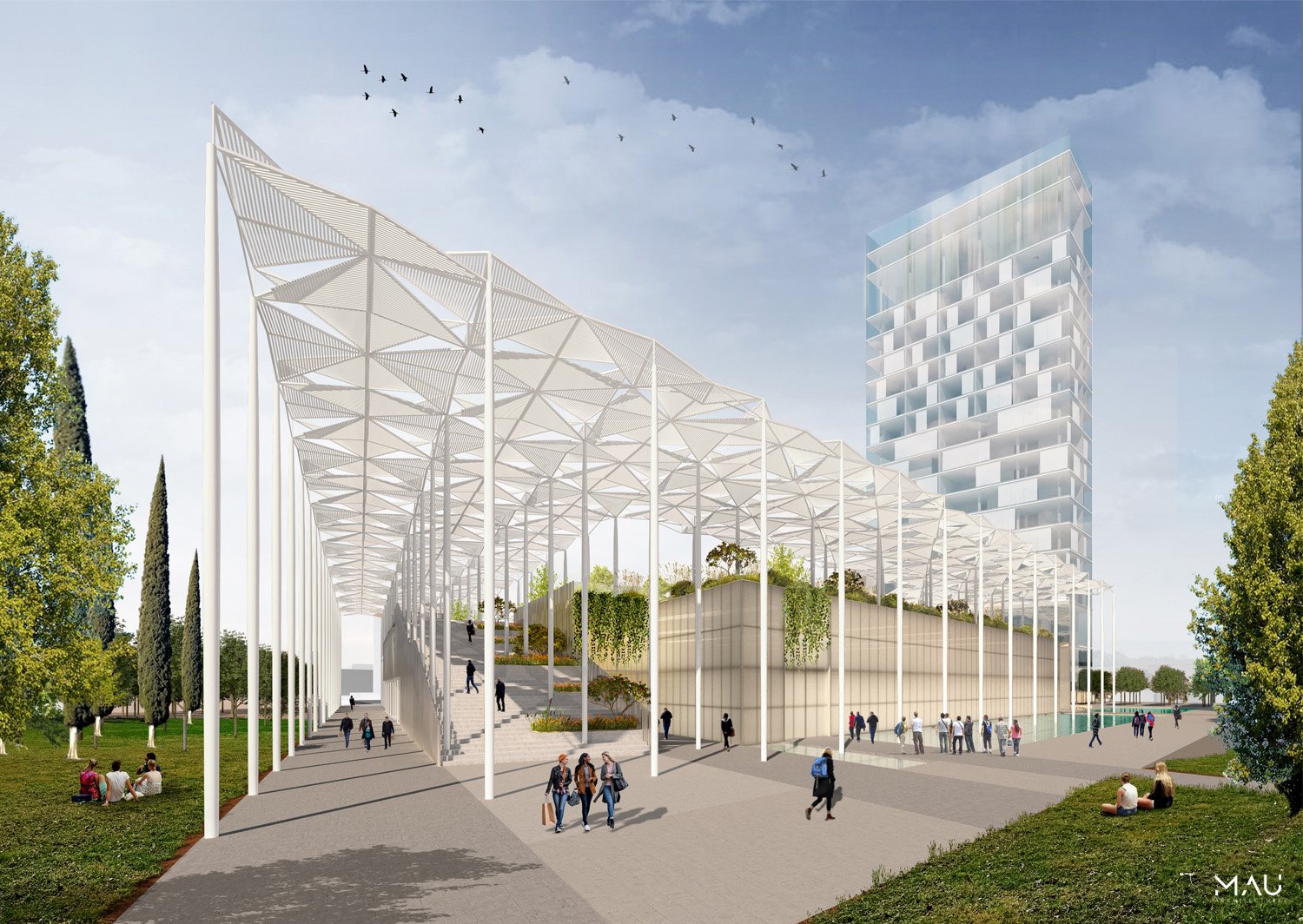 MAU Architecture is a contemporary architectural practice based in Fier, Albania, and Padova since 2017. We develops our line through the participation in projects concerning public-private programs, promoting through architecture the sense of community and the individual identities. We are a multi-disciplinary design practice working in the fields of Architectural, Interior and Urban planning. Our goal is to combine innovation and research with a professional completeness, capable of responding to complex programs at any scale. We have oriented the research towards the integration artifice-nature, to create sensitive environments in perpetual change, which stimulate the interaction between man and environment. Our team also makes use of external expertise at the international level in the field of engineering, landscape and sustainability, being able to work with different clients, from private to public, translating and interpreting their needs and expectations.