This small Georgian cottage holds a significant place in Tasmanian history. For nearly 175 years, it has been a sentinel on the north-eastern coastline of Bruny Island, Tasmania, Australia at the entrance of the Derwent River.

The house and Kelly’s Whaling Station is registered with the Tasmanian Heritage Council and are significant for their association with Captain James Kelly. Kelly, once harbourmaster of the Derwent, is noted amongst other achievements for his momentous voyage around Tasmania in a whaleboat and being the first Australian to penetrate the Antarctic Circle in 1832.

The exact date of construction is unknown, but records have it fully constructed and inhabited for some time in the 1840s. It was built by Kelly for his daughter Mary. The process of removal of much of the later building fabric and revealing of original structure caused speculation that the cottage may have been built by various of Kelly’s ships’ carpenters in the off-season from his whaling enterprise. It provides a remarkable exposition of various construction techniques.

Captain Kelly’s Cottage involves the painstakingly considered restoration of the original weatherboard cottage on a remote bay of Bruny Island. The original cottage was deteriorating due to its age and its harsh environment. Over its life there had been a number of unsympathetic alterations to the small cottage. Part of our work involved the removal of these non-original works, to respectfully return the cottage to its original form.

Revealed in the outcome are unique construction techniques, some of which have been exposed in the new works such that they can be fully appreciated. Further contemporary interventions have also been undertaken and inserted within the heritage structure to make the building more responsive to today’s inhabitation standards.

As part of this project, extensive research has been carried out into the history of the cottage, tracking through libraries, original diaries, and detailed logbooks. The original cottage consisted of two structures: bedrooms and kitchen, surrounded by a wide verandah. Construction has also involved the painstaking removal of paint layers to reveal the original paint colours which have been revealed in parts and provided inspiration in other areas.

A new living area has been placed between the two existing structures; the kitchen and bedrooms. The original verandah has been a major point of inspiration for the new intervention. The layered soffit and exposed ceiling rafters have been continued in the new entry and living spaces to connect new with old through this language of ceiling layers. In effect, the verandah extends and encapsulates the new works tying new and old together. This is reflected both in plan and section.

The historic kitchen has been restored with its 1960s profile weatherboards removed and original profiled boards fabricated and installed externally. Layers of paint were removed internally, and the gabled profile ceiling has been installed to increase the volume of this space to accord with contemporary requirements. Evidence of an old bread oven lead to the task of creating a new brick oven and cast iron facing incorporated into the masonry wall.

A sheltered north-facing courtyard is nestled into the leeward side of the cottage. A new chimney is located in the position of the original (but long removed) chimney. This reinstatement of the chimney helps to define and warm the courtyard space and is constructed of prototyped custom made white ‘ghost’ bricks. The courtyard is located around the existing walnut and mulberry trees, both over 100 years old. These two trees are as powerfully present as this historic cottage that has been a sentinel on the edge of the cliff for over 175 years. A dry-stone wall blurs the boundaries of these histories. 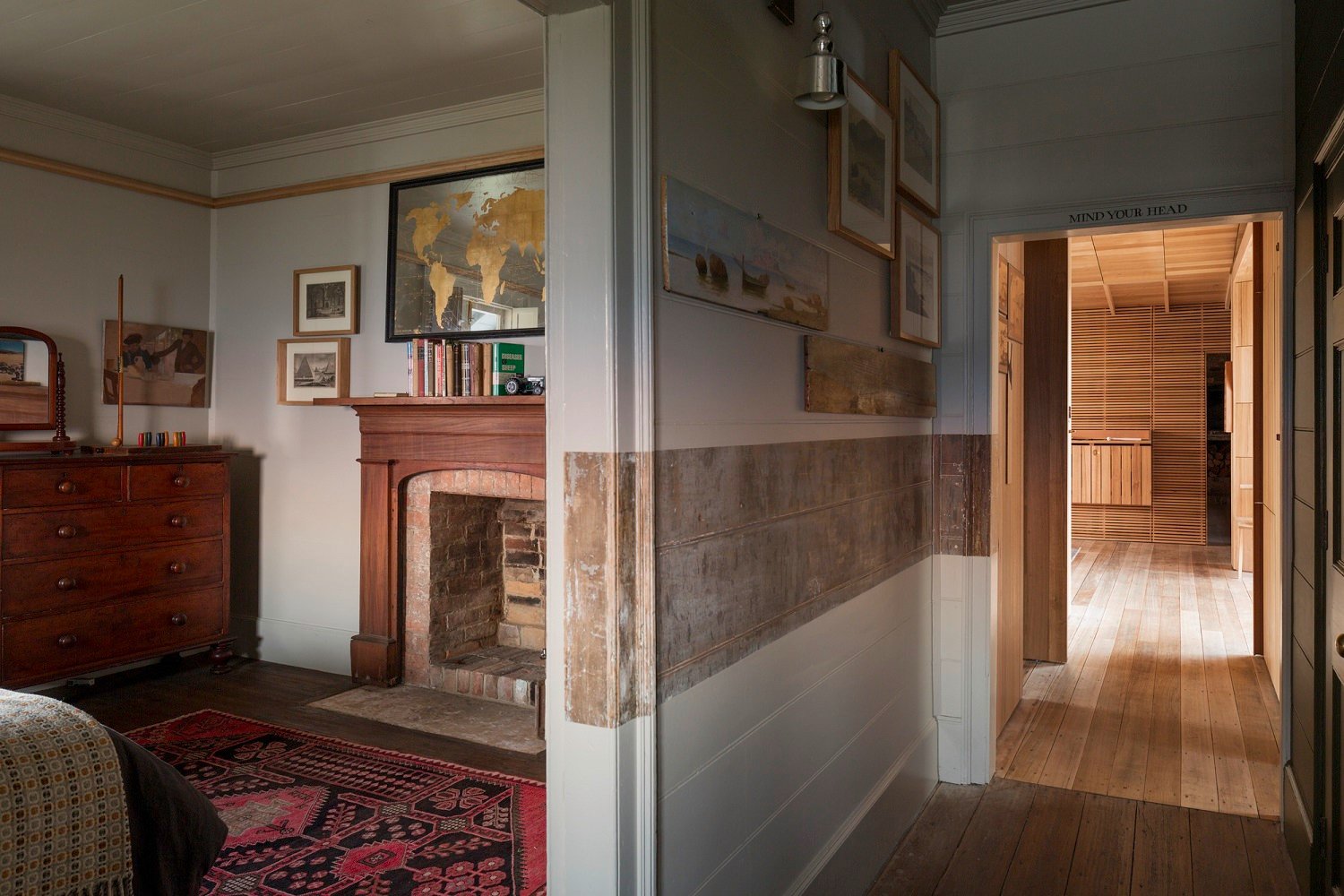 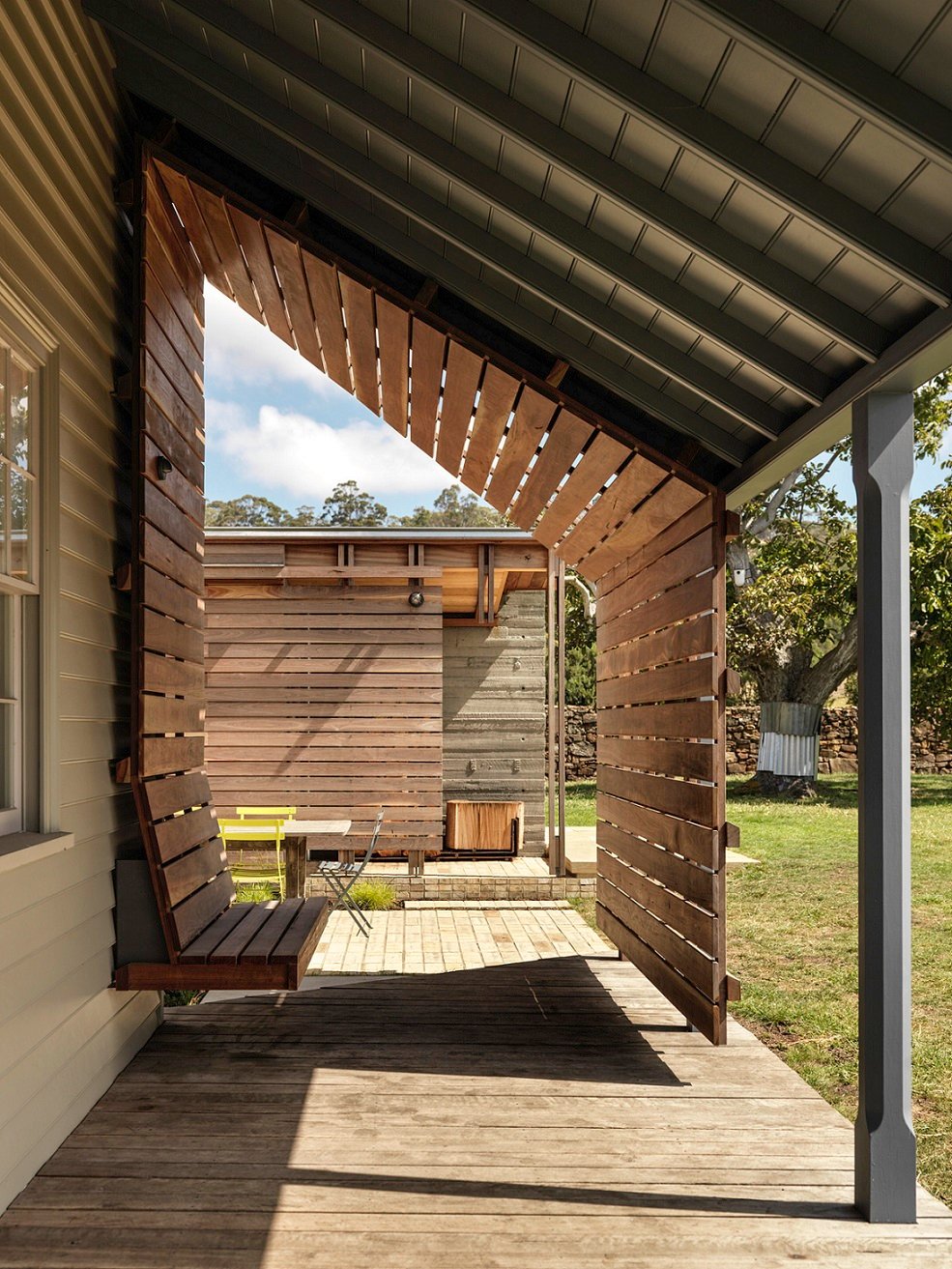 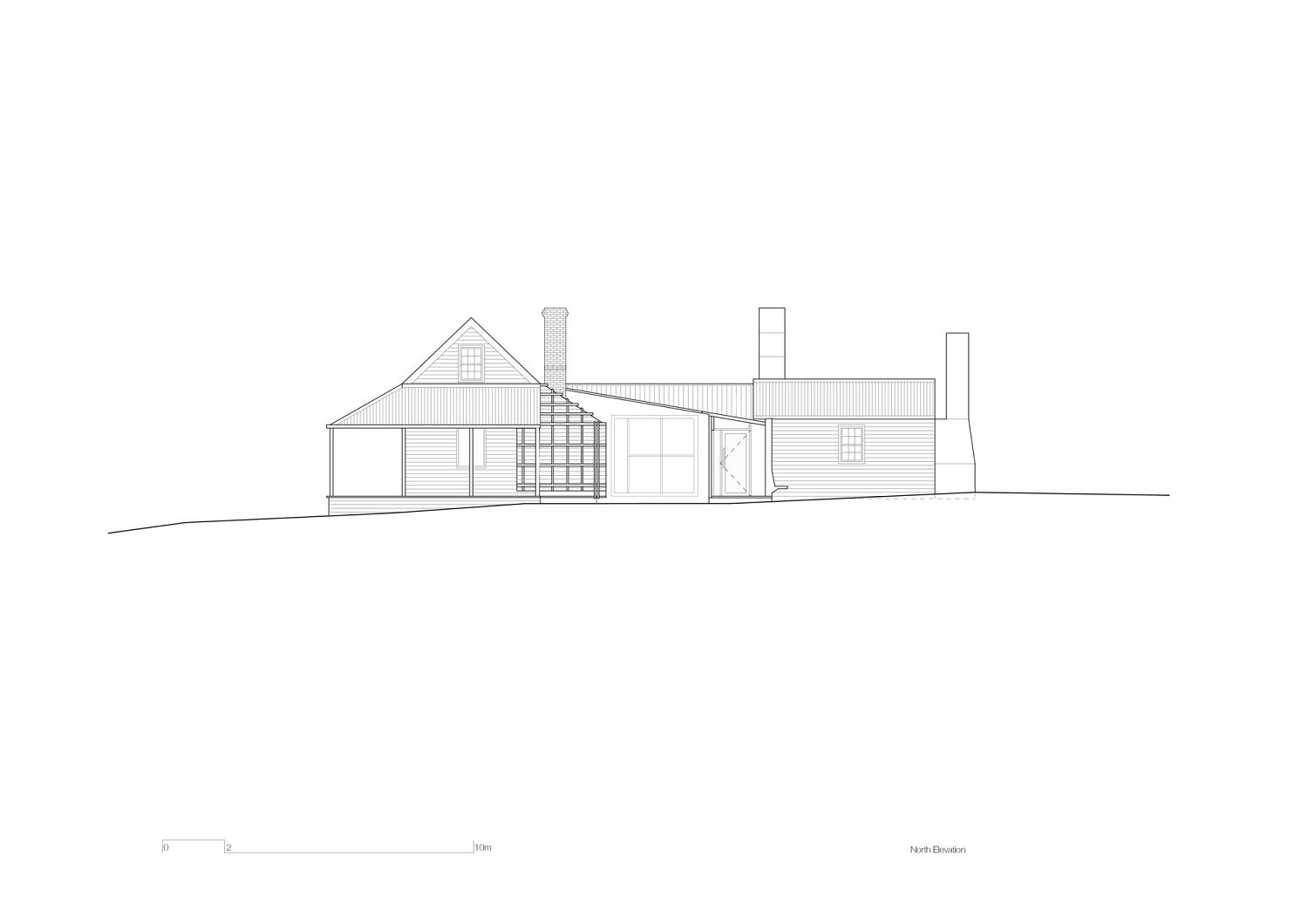 Narrative is employed by JWA as a design process, navigating through the development of a design using the personal and collective histories of the practice’s clients, memories associated with a site, landscape and built context as generators of a cohesive narrative. Some of these strands are real, others imagined.