The traditional hiking hotel is located on the „Bühel", a small elevation next to the village church, at 1200m above sea level. In order not to limit the view and exposure to the sun of the existing hotel structure still in usage and to maximise the view and the sun orientation of the extension, the new volume was positioned to the north-west side. In the same way as the traditional local buildings, the new extension has a small plinth and grows in height using as little land as possible minimizing its impact on the landscape.
The plan of the new volume was distorted in order to reduce the north façade and enlarge the east and the south façade. Furthermore, to better respond to the local climatic conditions which comprehend a very snowy winter season, the volume culminate with a steep pitched roof.
A striking feature of the building are the triangular shape bow windows which are turned giving the rooms the best orientation and the best view. These windows are designed as big as possible in order to allow the guests to enjoy the view, but at the same time to prevent problems of overheating during summer without the need of sun shading systems.
The green color shade of the blackened wooden facade is also a very important element of the project influenced by the dark-green, or often black forest color, which seem to blend nature and topography with the building. The exterior wooden cladding protects a thick layer of continuous insulation that covers the concrete walls. The walls in this way operate as thermal mass improving the indoor climate and reducing the needs of heating in the cold season and the cooling in the warm one.
The building is heated during the cold season with a highly efficient district heating system and have a controlled ventilation system that allows to reduce its heating demand.
The project contains 20 new hotel rooms, a new wellness area and the enlargement of the restaurant. This design was envisioned as an extension of the existing hotel, strengthening his qualities and adding new ones.
All rooms are reduced to the essential and their richness is given by the natural materials used and by their beautiful view. The rooms are also provided with a small loggia that allows the guests to relax in a little outdoor space screened from the wind.
Characteristic elements of the local building typology and local materials were translated and interpreted. The hotel rooms have massive larch wooden floors which comes from the surrounding woodland. The massive wood used for the façade finishing as well as for the flooring was preferred to a laminated wood because instead of loosing its beauty over time becomes even nicer acquiring a beautiful grayish patina and extending the life of the finishing material without need of substitution.
The interior plaster has stone aggregates coming from the copper mine close to the site. This rough plaster enriches the atmosphere of the rooms giving even to such an elementary component as a white plastered wall a new richer appearance. Furthermore, this texture crates a subtle but direct reference to the color of the surrounding mountains, preferred destination of the hotel´s guests.
Local materials have also been used for the creation of lamps especially created for this project in oxidised copper. Their uneven color that refers to the long Alpine handcraft tradition combined with their simple and precise geometry create a beautiful contrast.
Furthermore, in order to give the rooms more privacy we used curtains which were made of local Loden wool.
Because of the carefully chosen regional produced materials we employed local workers and handicraft and we reduced drastically the transport distance of the construction materials creating at the same time a homely and calming atmosphere. 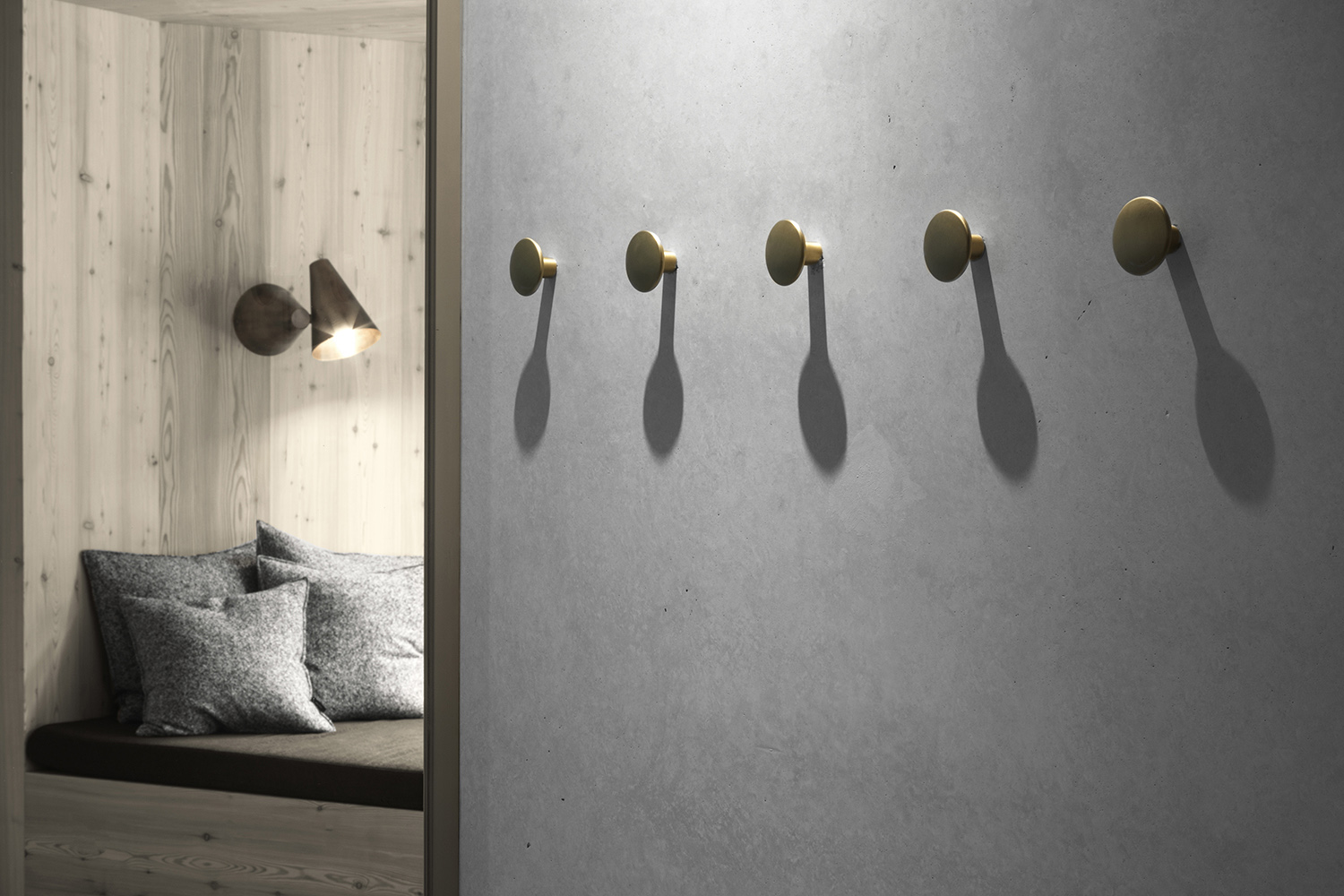 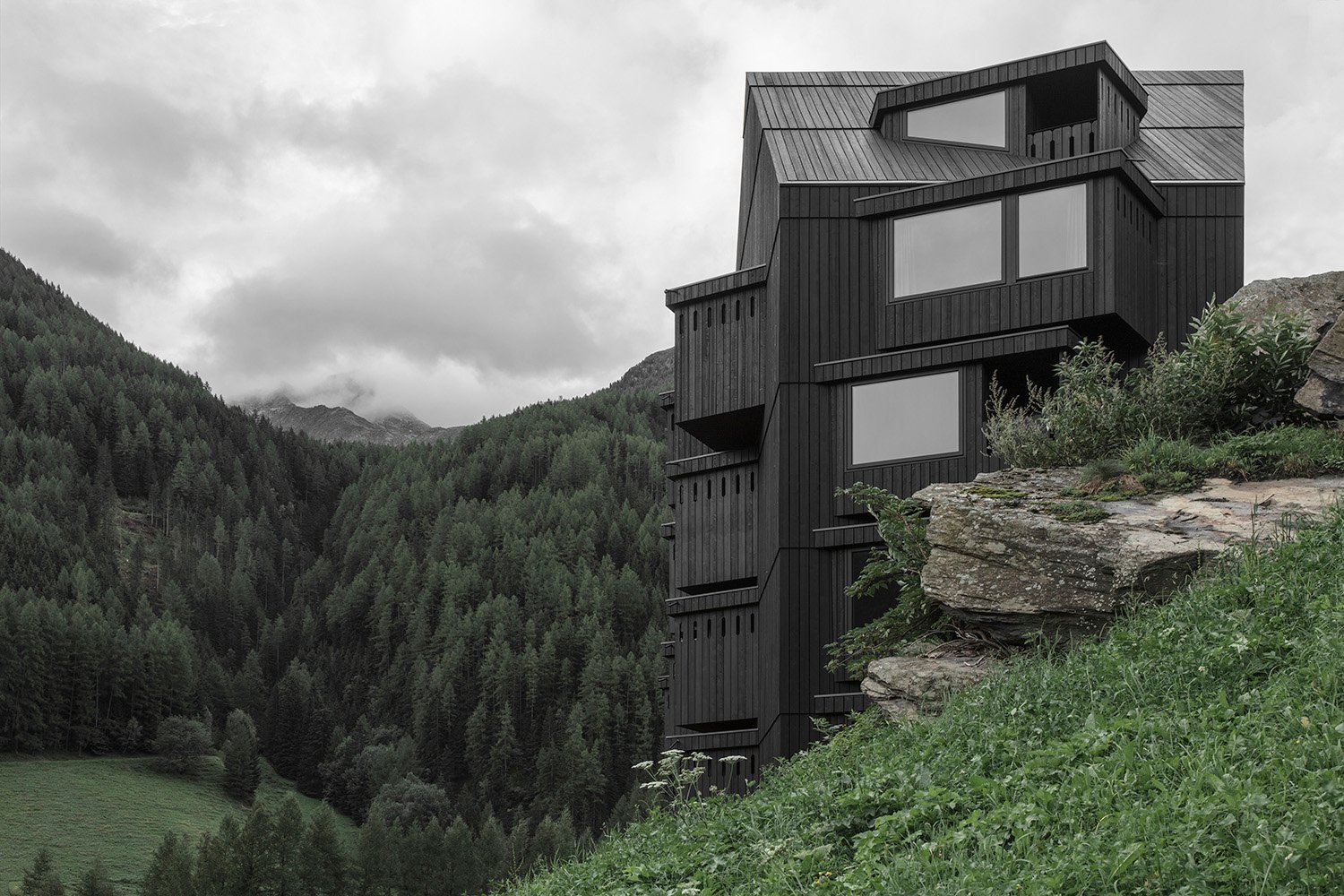 The brothers Armin and Alexander Pedevilla founded together pedevilla architects in South Tyrol in 2005. Since then, their work has received numerous awards and has been shown in various exhibitions. They have been lecturing at universities and institutions in Germany, Austria, Switzerland, Italy and have been jurors at architectural competitions. For pedevilla architects, building means a conscious approach to social, cultural, economic and ecological components of everyday life. The integration of a building into existing local built environment is as important as dealing with the temperature and the local climate. In this context, the issue of consistency becomes an important factor in planning decisions. "We are concerned here with the cycles of the materials used, their durability, but also with the use of traditional craftsmanship methods, a knowledge that we thought was lost, and above all with the fact that materials live and evolve over time."