Utopia, the Library and Academy for Performing Arts, has been slotted into the urban fabric of the Flemish city of Aalst to enhance the characteristic irregular streets and intimate spaces of the city centre, and to interact with them. The project is a close collaboration between KAAN Architecten and main contractor Van Roey.

The ‘Pupillenschool’ is now the cornerstone of the new complex. By inserting a considered rectangular volume on one side of the existing building, three new characteristic squares have been added at Esplanadestraat, Graanmarkt and Peperstraat. The new 8,300 square metre brick structure has a central location in the city and is surrounded by the three squares, giving the city a new cultural public space. Utopia functions as a covered square that connects the three outdoor spaces, embedded in the city by its diverse experience. The rich history of the location is reflected in the building. The past is recounted, here, on a site full of history where one dreams of the future.

Taking its cue from Thomas More’s book “Utopia”, first printed by prominent Aalst citizen Dirk Martens, the building follows the simple brief of being a home for information, knowledge, culture and leisure. Utopia, the city, and its residents are inextricably linked and can gaze at each other through tall and wide openings, carefully sliced out of the brickwork. Within the new building, the ballet room, rehearsal studios and teaching spaces have windows as tall and wide as the rooms themselves, providing a view onto the city and a glimpse inwards from the city. Moreover, a 11.5-meter-high bookcase stretches towards the ceiling, filled with books donated by residents of Aalst.

Both outside and inside, the historic façades blend perfectly with the generous spaces. The open interior landscape of the building unfolds from floor to ceiling with, cantilevered into the space, several thick concrete floors that appear to float. Each level features bookshelves and reading tables, while looking into the atrium and towards the brick façade of the pre-existing building. The brickwork dialogues with light grey concrete elements which, in combination with the oak wood book cases and extensive daylight, results in a warm and inviting atmosphere.

The concrete structures seem to be supported by books. The staircase has a sculptural presence at the periphery of the magnificent atrium and reading room. All technical systems are concealed behind an expanded metal ceiling that softens the strong daylight and creates a pleasant atmosphere during the day. Apart from the ground floor auditorium, the academy for performing arts is housed on the first two floors, flanking the reading atrium.

The traditional library evolves to a place for meeting, relaxing and learning; both physically and digitally. The two functions, the library and academy, complement each other and offer an added cultural value. The historic building provides good opportunities for this programmatic combination. Both functions, however, require different needs. Reading in the library should not be disrupted by music lessons and play’s rehearsals. Suspended concrete floors replace the original wooden floors, doors are transformed into sound barriers, and double-glazed windows capture each single piano note.

Much of the building’s exterior consists of new brickwork. The predominant colours of the Flemish city were examined which resulted in choosing a dark brick called “Red Aalst”. To accentuate Utopia’s duality, these long flat bricks have been laid in horizontal format to complement the vertically-oriented old school façades.

Utopia’s openness also exudes sustainability. The building has achieved a BREEAM Excellent rating: materials and labour were locally sourced, low-energy machines were used for construction, solar panels, geothermal heat and LED lighting have been integrated in the design, rainwater is recuperated and buffered, and 230,000 bricks were chipped away and reused elsewhere.

The desire to interact with the urban fabric has been achieved: Utopia is a reference point in the city centre, a new cultural landmark in the everyday lives of the citizens of Aalst. 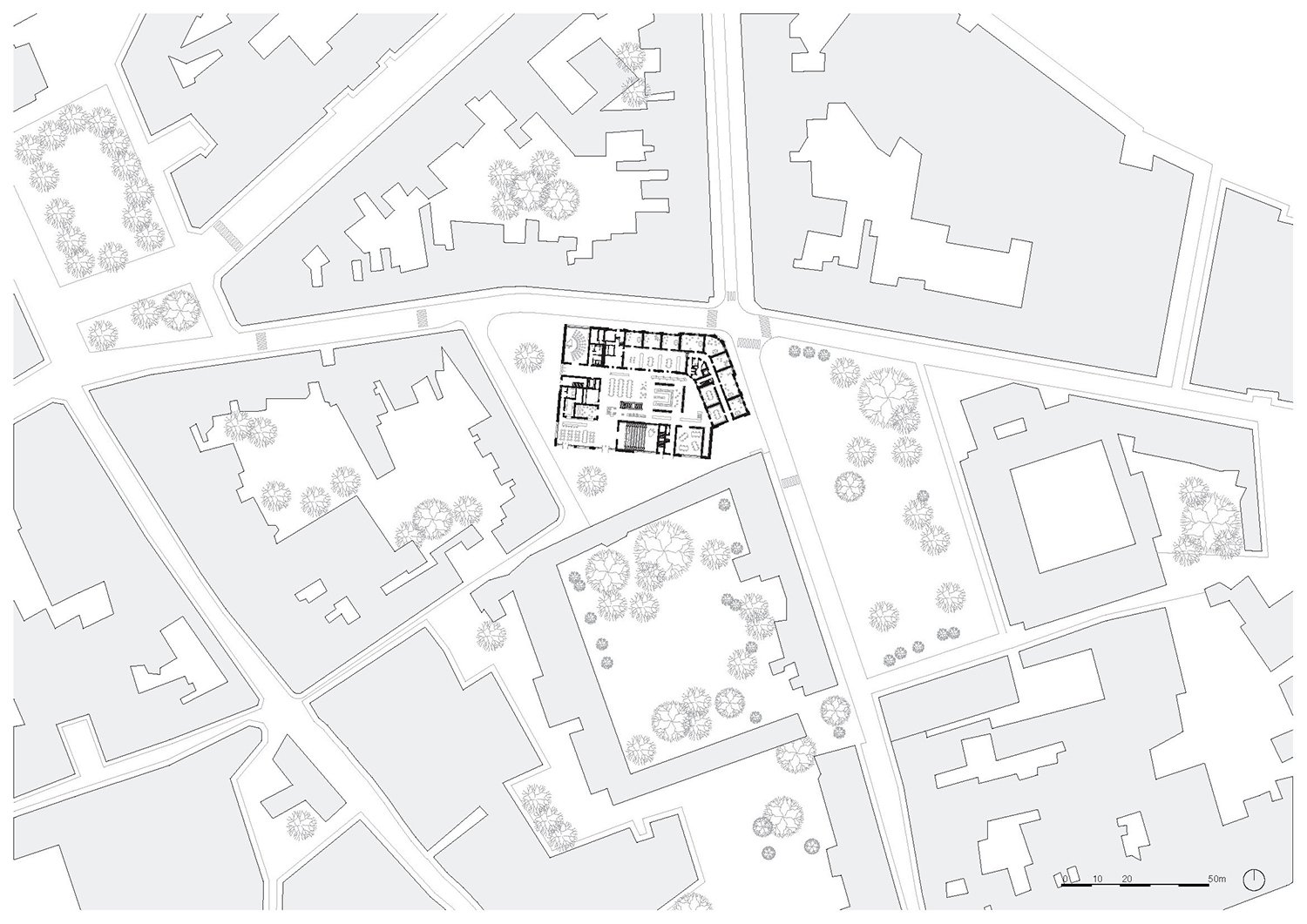 KAAN Architecten is a Rotterdam, São Paulo and Paris based architectural firm that operates in a global context, merging practical and academic expertise within the fields of architecture, urbanism, and research on the built environment.

Led by Kees Kaan, Vincent Panhuysen and Dikkie Scipio, the studio consists of an international team of architects, landscape architects, urban planners, engineers, and graphic designers. KAAN Architecten believes in cross-pollination between projects and disciplines as an essential tool to fostering a critical debate within the firm.

The studio maintains a culture of constant evolution, which is essential in a profession that changes at a rapid pace. KAAN Architecten’s projects transcend the traditional notions of scale and typology, ranging from furniture and interiors to urban development and from retail and offices to museums and buildings for health and education.