Garage Italia is situated in a beautiful piece of 1950s architecture with a fluid form. This ex-Agip petrol station is an example of modern streamlining commissioned in 1952 to Mario Bacciocchi by Enrico Mattei.
The conservation, restoration and static consolidation project respects the historical identity of the space. The main entrance and the curved walls, with glass sheets on metal frames, have been retained. The curved surface of the two cantilevered roofs, and the outer walls, are clad with a mosaic of ceramic tesserae. They were restored to bring back the exterior to its original colour. Two rows of neon lights follow the outer edge of the wings, exactly as they were in the Fifties. Inside the building, 1,700 sqm are spread vertically over two storeys above ground and in one basement level. On the ground floor a cloud of flying machines is suspended over the bar area and lifts the eye towards the creative anima of Garage Italia: the hotbed of tailor-made customisation projects. The core of the activities is inside the Materioteca. This is a place where ideas become realities and where it is possible to touch the materials that will be used. On the back wall, a huge library shows the quality of the varnished metal sheets, fabrics and leathers. Going up to the first floor, you reach the restaurant. This occupies a trapezoidal space. At the centre, the body of a Ferrari 250 GTO has been converted into a cocktail station. Suspended from the wall is a toy track with Formula 1 models on it. Positioned on the outer edge of this space are benches, tables and chairs that were custom-designed. The spacious outdoor terrace is bordered with tropical vegetation. Situated at the far end of this terrace is the “Riva Privée”, a small external space laid out as an Aquarama motorboat. In the basement floor, two teak doors open into the bathroom area, where the sanitary ware is in copper-coloured steel.
The whole project is designed to evoke the original atmosphere of the mechanical workshop, projected into the modernity of the 21st century. The interiors are characterised by the blue of their walls and by their inner partitions, built with crude iron industrial structures. The floors are in black cement. The custom-designed furniture adopts an industrial style, enriched by elegant manufacturing details.
The technological fittings have in fact a heat pump system which uses aquifer water, so
exploiting the principles of geothermal energy for the heating of indoor spaces. It allows for
remarkable savings in costs and harmful emissions into the environment. Electricity is partially supplied by photovoltaic panels positioned in such a way not to alter the architectural line of the building. The varnishing of the exterior was carried out with Airlitebased varnish, a special colouring that uses sunlight to reduce the level of polluting substances in the air, up to 88,8%, neutralise smells and eliminate moulds and bacteria. 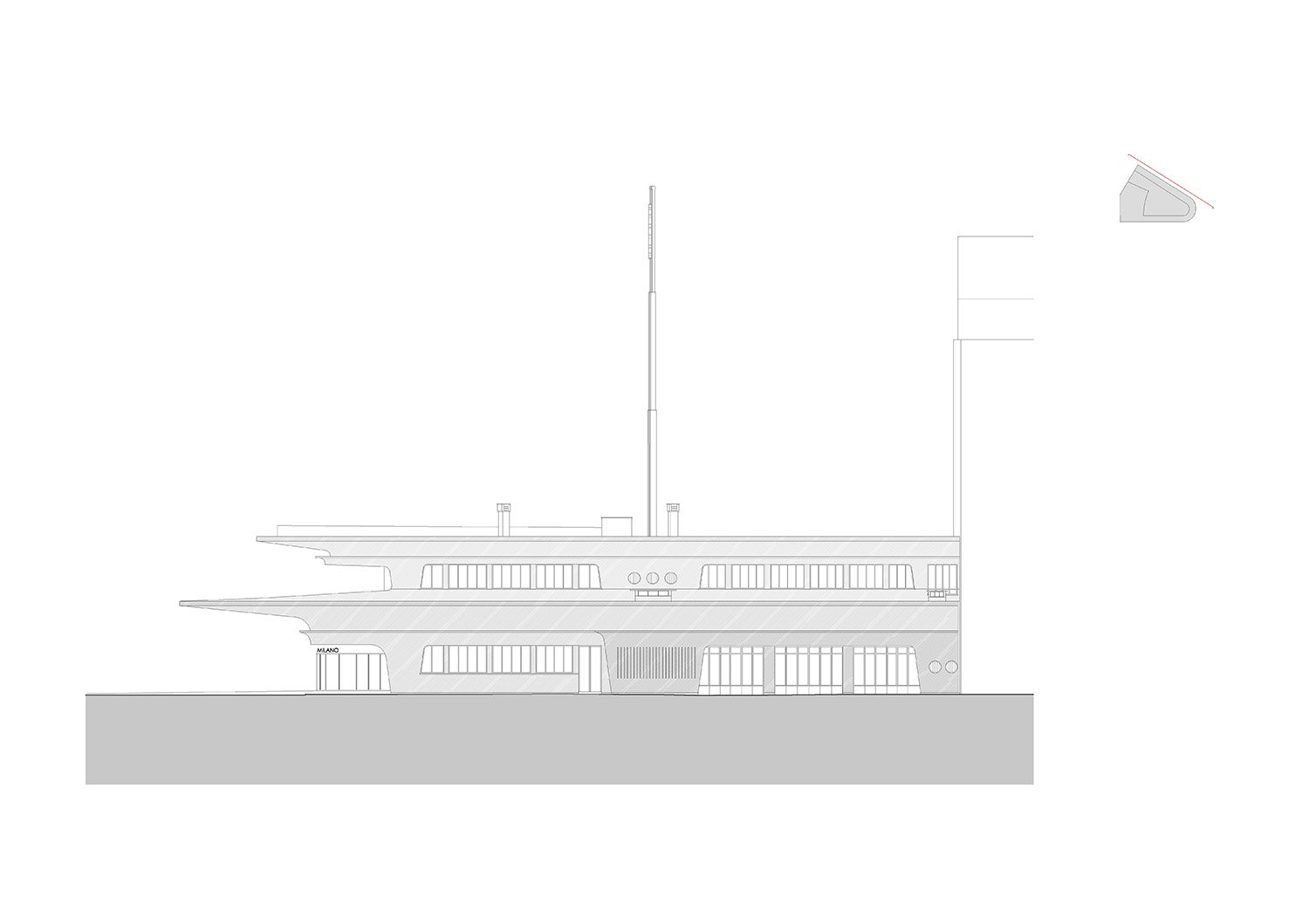 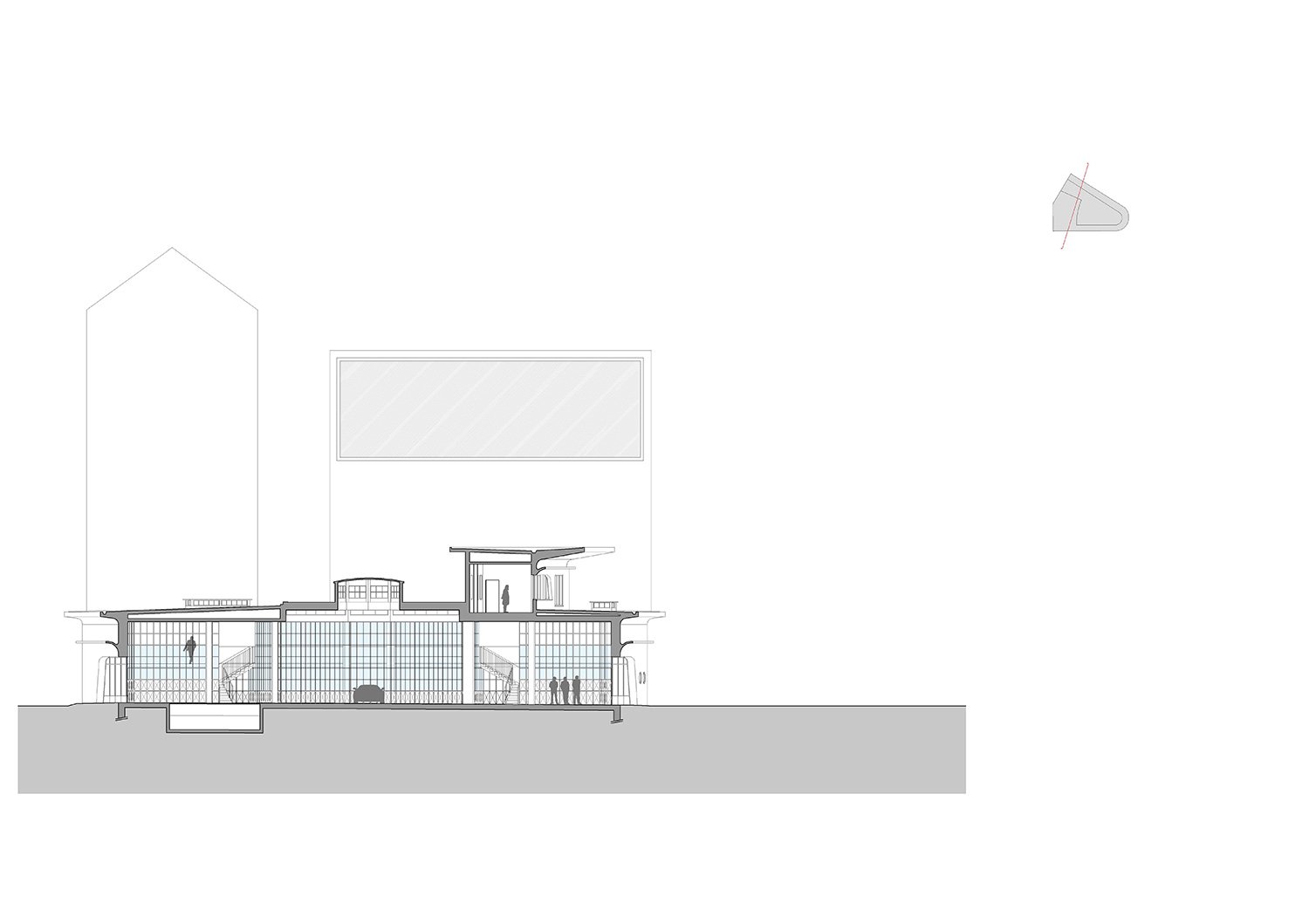 Michele De Lucchi was a prominent figure in movements like Alchimia and Memphis. He has designed lamps and furniture for the most known Italian and European companies. For Olivetti he has been Director of Design from 1988 to 2002 and he elaborated various theories on the evolution of the workplace. He designed and restored buildings in Italy and worldwide. For banks he has collaborated to the evolution of the corporate image. He has taken care of numerous exhibitions and has planned buildings for museums. In 2000 he was appointed Officer of Italian Republic by President Ciampi, for services to design and architecture. In 2001 he has been nominated Professor at the IUAV in Venice. In 2006 he received the Honorary Doctorate from Kingston University, for his contribution to “living quality”. In 2008 he has been nominated Professor at the Design Faculty of the Politecnico of Milan and Member of the Accademia Nazionale di San Luca in Rome. During 2018, He is editor in chief of the Domus.