Hannae Forest of Wisdom is not a cultural space generated by a big public development project.
It was initiated by the idea of a creative space, where people enjoy to inhabit and willing to come back every day. Therefore we improved an abandoned urban space into a unique and attractive space with creative ideas.

1) Requested by Nowon-gu Office as part of the community project
2) There were several options for the site, and through investigation and site analysis, an abandoned fountain space in a neighborhood park was selected
3) Opinion gathered through public hearing
4) Design and development
5) Construction
6) Completion
7) Local committee operates the library, café, and after-school learning class

Urban regeneration in Seoul is no longer focused on the city-scale projects that transforms the entire block or the part of the city. Rather it happens through small projects on an abandoned site, through which the local people can reconnect themselves to the society. Unsangdong Architects offers a small community space for Hannae area, which can regenerate the local culture.
Hannae Neighborhood Park lies next to Jungrang Creek and serves itself as a sport ground for neighbors. The site is located near the entrance of the park. An old, broken fountain was standing on the site, disconnecting the community from the park. The park is located in a high-density housing area, but there is an absence of cultural platform. Our design for Hannae Library rejuvenates the atmosphere of the neighborhood and connects culture and nature through shared community space.

Hannae Forest of Wisdom offers a new environment to Nowon-gu, where concrete apartment complex stands along Jungnang Creek. We propose another artificial forest alongside to trees and nature of the neighborhood park.
It is not a dominant architecture, but the space expands one's imagination. Its shape is a combination of nature and concentric encounters, symbolized as overlapping mountains.
The frame is not isolated triangles, but a frame of communication that relies on each other. This creates natural and original architectural prototype, which symbolizes communication, nature, children and adults.

The space unit is the book shelf, which is the wall itself. The shelf composes the space and becomes a partition at the same time. Throughout the history the wall served as a separator of the space. In Hannae Library, however, the wall becomes the labyrinth that flows through the space, connecting and disconnecting continuously. The bookshelf integrates space, furniture, and structure together. This is a small library with the floor area under 330qm, but the visitors experience various spatial aspects inside. The library overcomes its limitation in terms of size and develops itself into a multi-functional space through different conditions. The gable roof is the continuation of the wall(book shelf) and forms threshold through varying heights. Natural light falls inside through this point. The labyrinth stimulates the imagination and creativity of children meandering through the library. 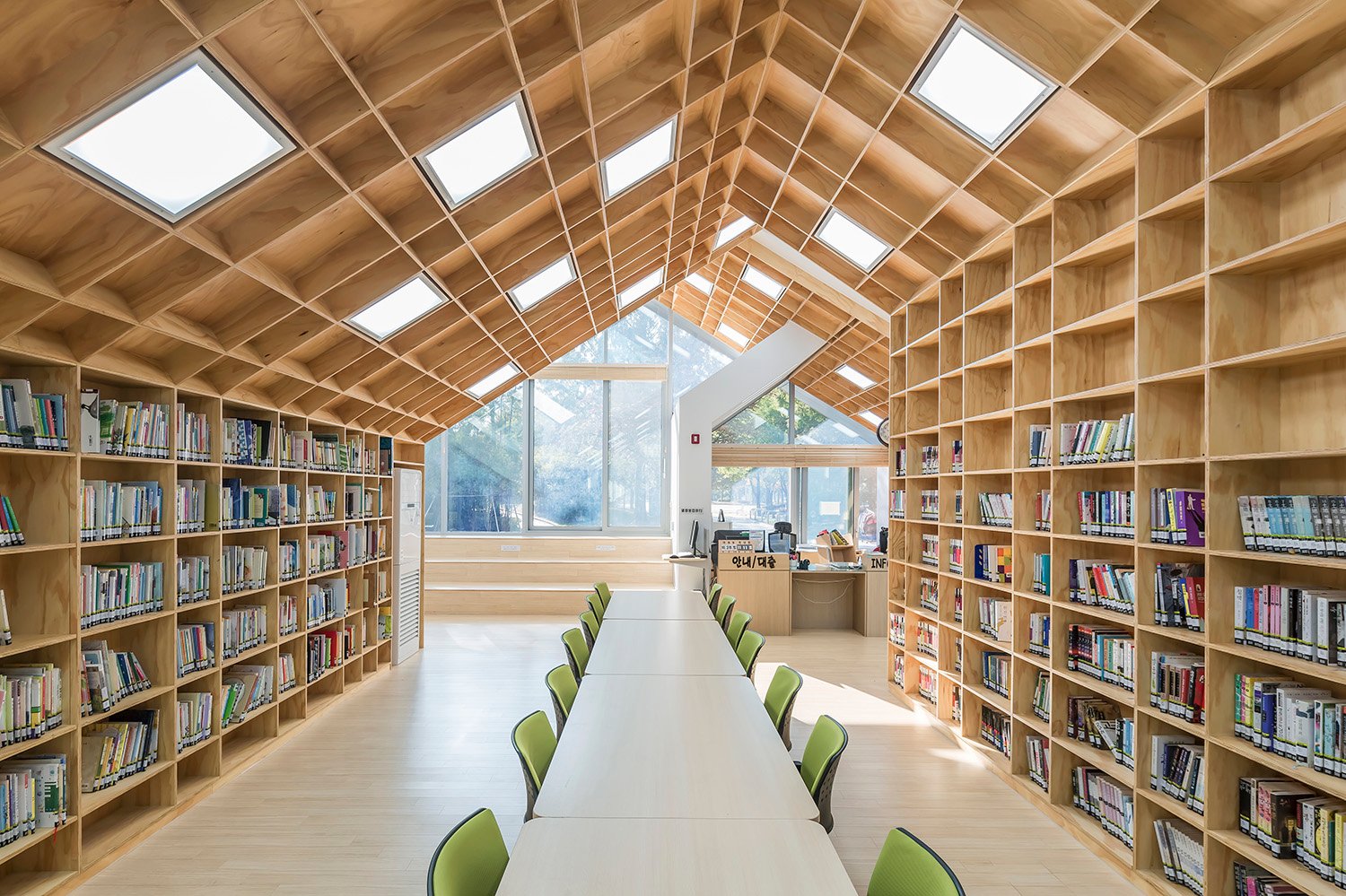 When we found the Group UnSangDong, our focus was forming a creative and interactive map of operative network that can embrace not just buildings, but all possible fields that can generate interesting feedbacks with architectural mode. These feedbacks play critical role in establishing cultural networks that surround the Group UnSangDong.
The architectural practice of UnSangDong has been carried out in similar manner in which the framework of projects are set up for continuous interaction between culture and architecture in fluidity. We call this attitude “working on cultural cracks”. As if someone who is rediscovering the slit of air squeezing through the gap between the pieces in the armor, we seek architectural desires oozing through the cultural gap in-between the pieces of our society, or desires for finding ways to directly transcribe from physical space to cultural space.