For nearly a century, The New School has been at the forefront of progressive education, with design and social research driving approaches to studying the issues of our time, from democracy and urbanization, to technology, sustainability, and globalization. In recent years, as the school outgrew its longtime home in New York’s Greenwich Village and found its real estate holdings spread across the city, from the Financial District to the Upper West Side, this pedagogical model proved challenging to maintain without the physical plant to support it. The University Center both supports and furthers this model through its innovative design and responds to the school’s increasing demand for state-of-the-art, interdisciplinary spaces.

The University Center adds 375,000 square feet of academic and student space to The New School’s Greenwich Village campus. The 16-story center houses design studios, laboratories, interdisciplinary classrooms, the main university library, a nine-floor student residence, an 800-seat auditorium, a café, and flexible academic and social spaces for student activity. Conceived as a campus within a building, the University Center transforms the traditional university environment. Rather than compartmentalize learning, living, dining, and socializing spaces, these functions are situated in a vertical configuration, creating strategic adjacencies and heightening the university’s commitment to interdisciplinary learning.

A series of perimeter stairs is one of the primary design features in the University Center. These stairs are intended to act in conjunction with the skip-stop elevator system as the principal means of circulation through the building. Through the use of clerestory windows in hallways and on the façade, the University Center provides for daylighting along paths of travel, and the design is organized to encourage walking between destinations, as well as spaces for social interaction. The building provides bike storage rooms and showers to encourage cycling, walking, and running between home and school. The building was recognized by Former Mayor Michael Bloomberg as a model of the successful implementation of the “active design” strategies that are part of New York City’s anti-obesity and health initiatives.

This innovative interior organization is expressed in the exterior of the building. Tightly woven, purpose-built spaces clad in hand-finished brass shingles contrast with the open connective tissue of the stairs and quads visible through a glazed skin. The exterior mediates between the cast-iron facades of the Ladies’ Mile Historic District to the north and the brownstones of the Greenwich Village Historic District to the south and west. Located at the intersection of Fifth Avenue and 14th Street, the University Center broadcasts the experimental nature of the school’s new home, creating a dialogue between the campus community, the local neighborhood, and the city. 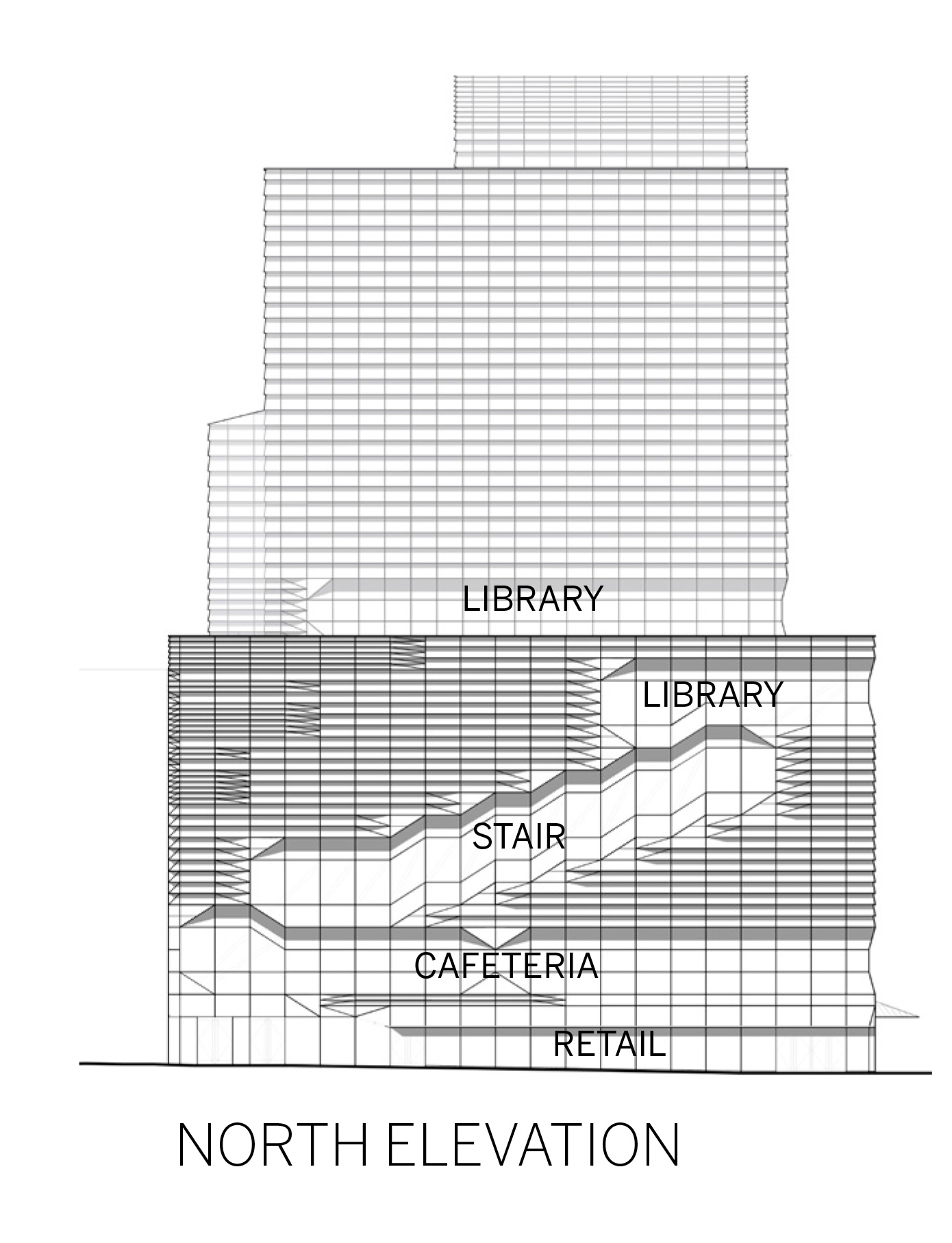 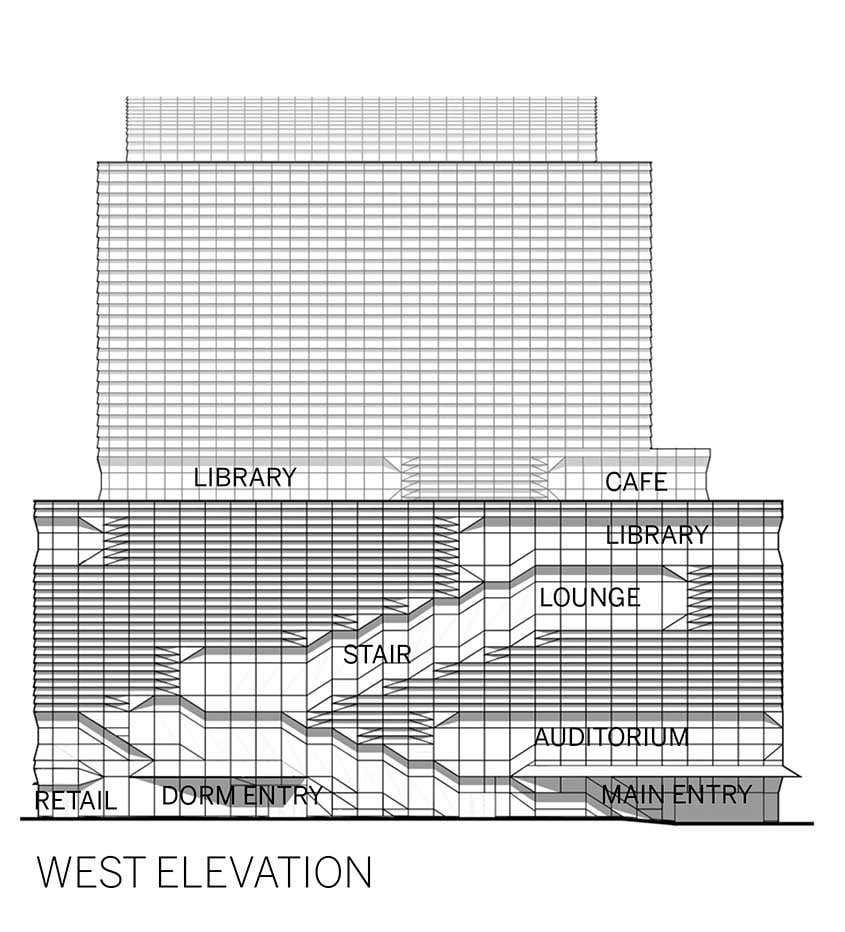 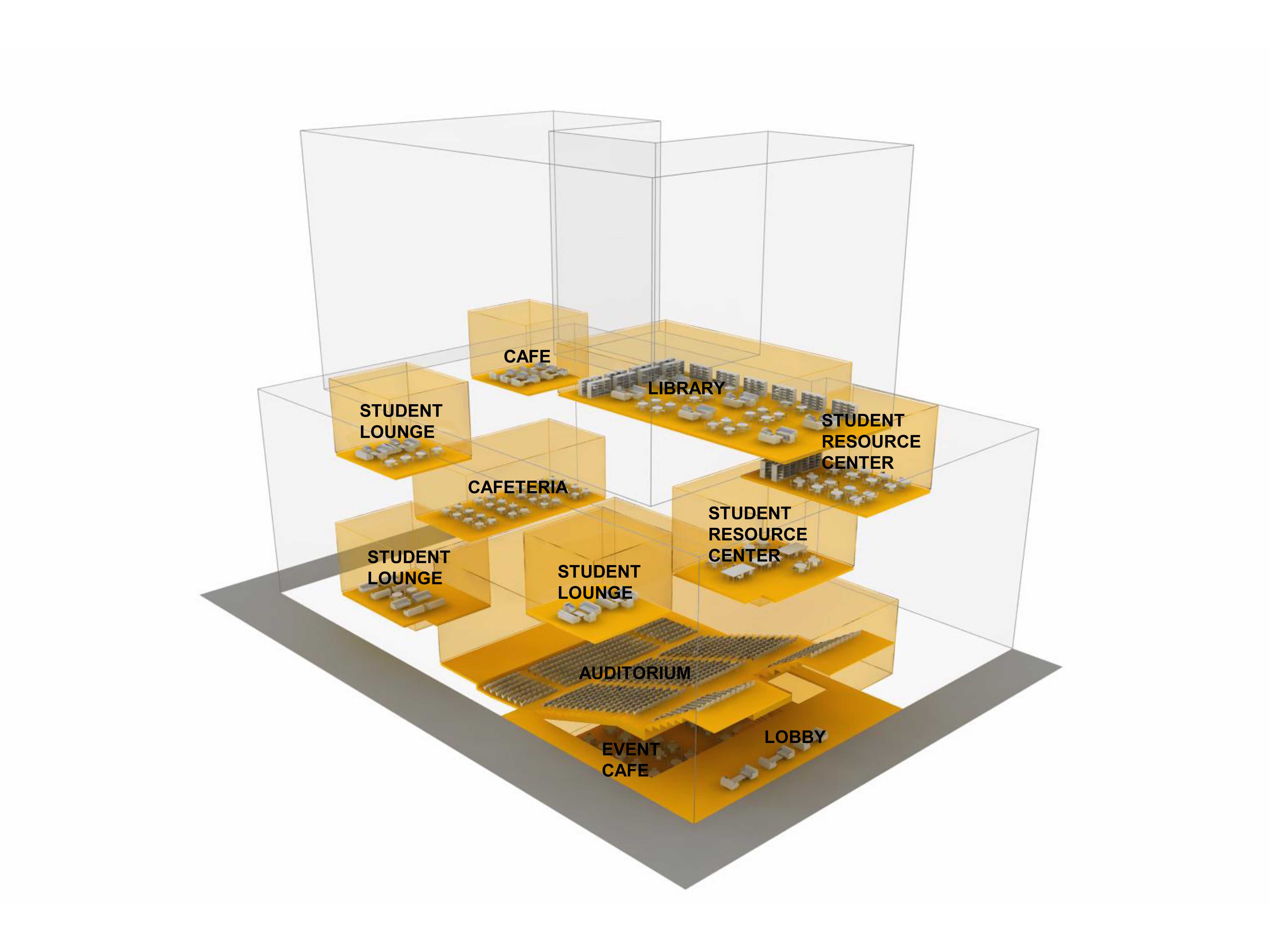 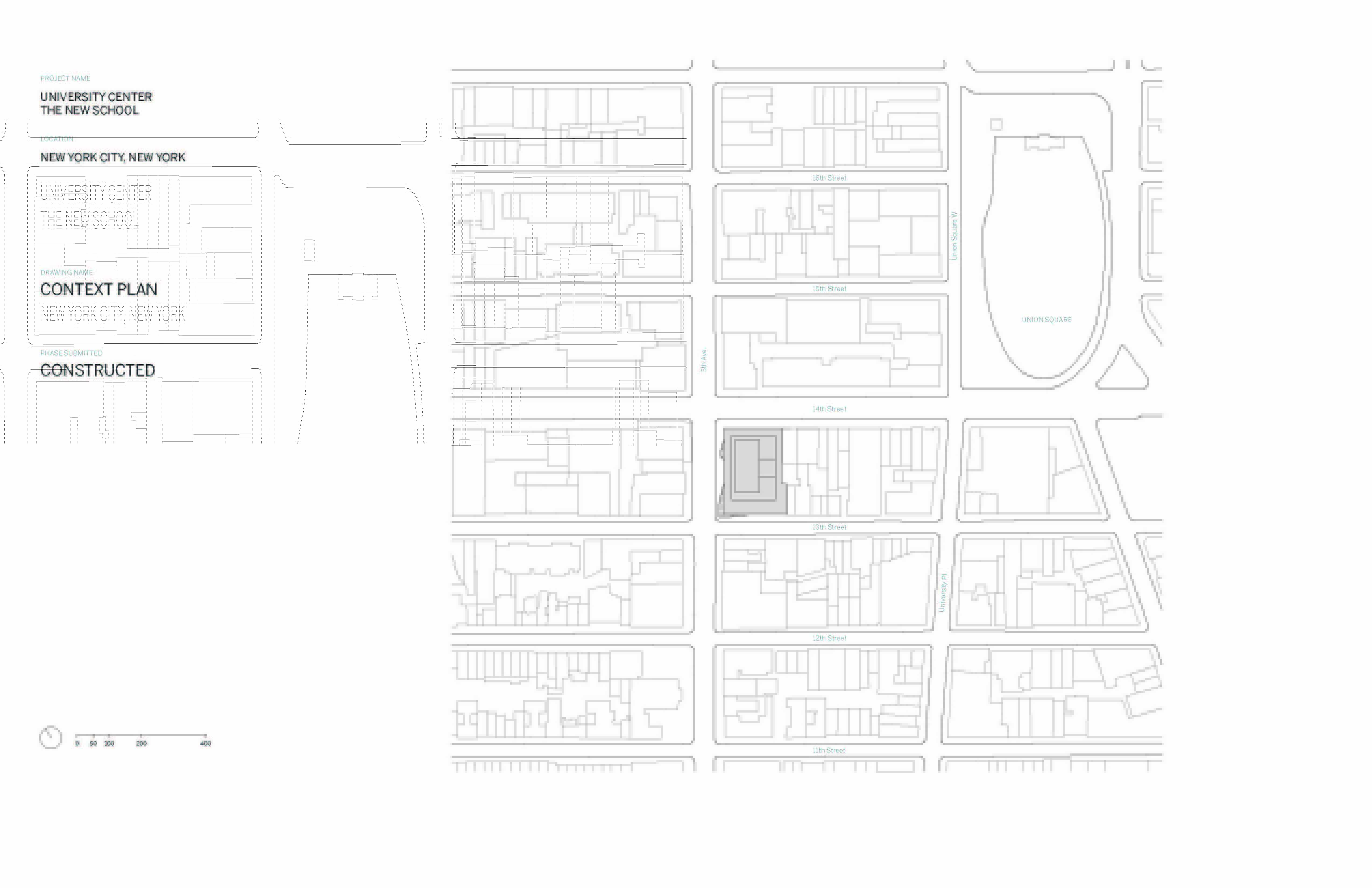 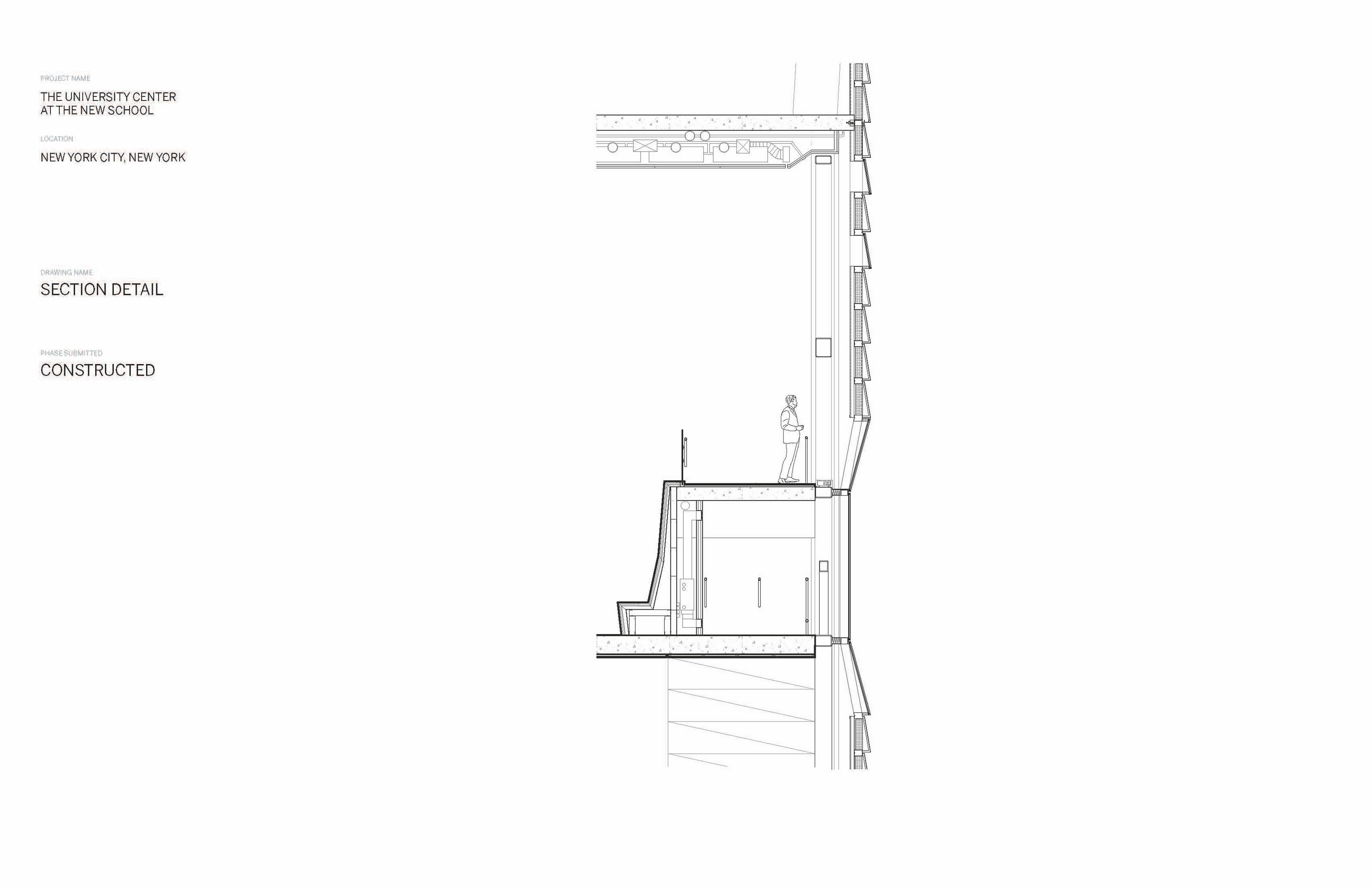 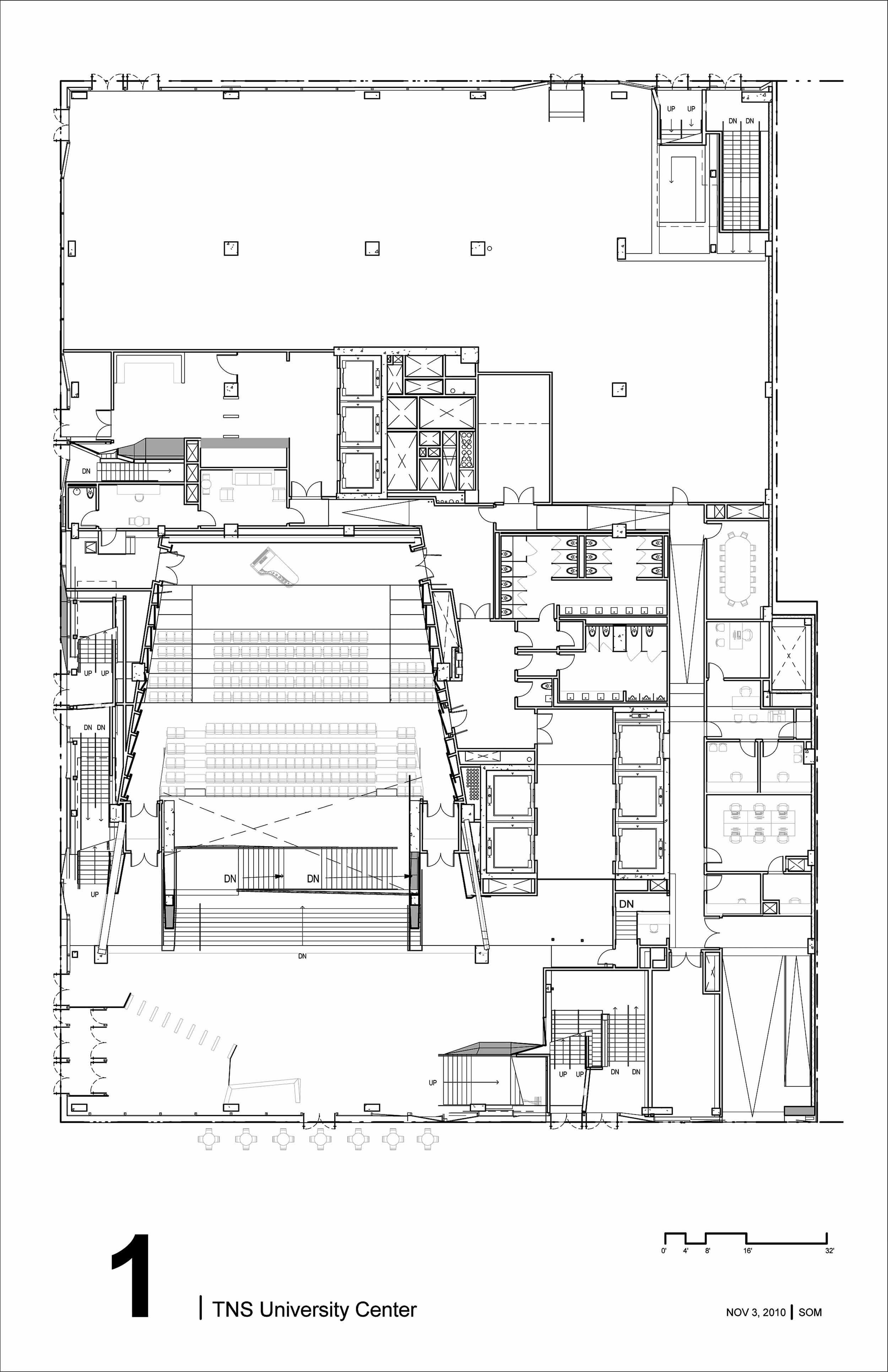 The University Center has been a great success for the identity of the New School, featured on all promotional materials and frequently toured by visitors and architects from around the world. It is the premier part of the campus for prospective students and it has become an academic and social hub as well as the heart of the campus. As a not-for-profit institution, the most significant indicators of market acceptance are not economic. Instead, they are measured by increased academic resources, heightened collaborative experiences, and a commitment to environmental stewardship. The New School has established environmental awareness as a core ethos of their institution by focusing on sustainability and reorganizing their programming in a center dedicated to Gold LEED standards.