Given the urbanization, people increasingly will have to live in apartment buildings, and the last decade has seen a boom in amazingly shaped towers with spacious balconies, hanging gardens and even vertical forests. But do these collectives of dwellings offer their inhabitants the opportunity to actually create communities? In almost 90% of the apartment buildings in the Netherlands we researched, this was not the case. In the remaining 10%, succes seemed to be a lucky shot.
A building with the privacyscript of a neighborhood
The Goudse Hoofd is one among a series of three to develop new building types that allow people to engage with their neighbors in a natural way. It is designed to facilitate social interaction by transplanting the privacyscript of a well functioning, parochial neighborhood. Facilitating social interaction requires knowledge of the social realms per level of publicness. The world is a patchwork of different levels, each with their own set of communication and behaviour rules. The moment people enter a different space, they 'read' the space, and adjust their behavior accordingly. With mixed messages, the users run the risk of damaging their self esteem by adapting to the wrong set of behaviour rules. To avoid this, and to collect essential knowledge on this issue, the projects studies the complete routing, as well as each of the separate steps in the neighborhood carefully examines the level of publicness. This 'privacyscript' of the area was then duplicated, and transplanted to fit in the building design.
The social unit
All separate spaces in the collective space of the streets were studied. Five were defined: the step in front of the house (1), the sidewalk (2), the street (3), a square (4), and, surprisingly: the car. For each step (space) two major indicators were examined: what is the chance of running into strangers, and who owns (or is responsible for) the place. The ratio and proportion of these two makes the space fit for one of the quintessential social realms: private – parochial – public. Each realm needs to be facilitated by space in its own manner: a private realm needs to offer complete control, while a public realm requires more space as well as the opportunity to encounter strangers, and a parochial realm needs to offer overview to enable social control. The last seems evident, but is hardly ever realized in apartment buildings. Step 2, 3, 4 were defined as parochial, the street leaning towards public, while step 1 and the car need to facilitate private space in a parochial space.
In the building design, all these steps were translated into new spaces with similar privacyscript values. Step 1 as a niche in the hall (step 2), the staircase (step 3) gives way to people from other parts of the tower, while step 4 is translated into an urban balcony for community use, providing the dwellers a beautiful view over Rotterdam. The elevator will always be an alien in this spatial narrative. But, basically the cars, parked on the street, are too. In this case, the elevator will be matched to the car, using two important measures: a glass front provides the necessary social control, and domotica enables the temporary private use of this little space.
Compartiments
Like the neighborhood, the tower is compartimentized. Each street is a social units, and so is every set of three floors. The social control within each street is handed over to another street, facilitated by visual connection between the two. The same will happen in the tower: the stairwell will perfom the same social function as the street, but is compartimentalized for fire security reasons. Between each social unit, a fire resistant glass box will lead the staircase to the next, offering visual connection between the social units. But the building offers more than that: most streets in the neigborhood have narrow sidewalks, and offer little space for community. In the building each compartment will have an urban balcony, facing in different directions. Traveling in the glass elevator will therefore show a new peek over the city per compartment.
Program
The program and the housing diversity are facilitated in the building by offering a simple, but adjustable base structure, enabling the combination of units and half units. Roofs are used as extra space for the whole community, providing outside space for children to play, and shetered spaces for community meetings.
A building to mend an urban flaw
Being able to offer the social interaction facilities of a neighborhood, makes the building suitable to repare difficult urban situations. One of these can be found in a disrupted north-south axis of Rotterdam. Leading past an elevated former railroad track, destined to be the future local highline, the axis runs into a retaining wall separating Rotterdam North from the city's major public space, the central market square. The Goudse Hoofd is applied as a hinge, with a sloping rooftop park on the parking garage to connect pedestrian and bicycle routes. 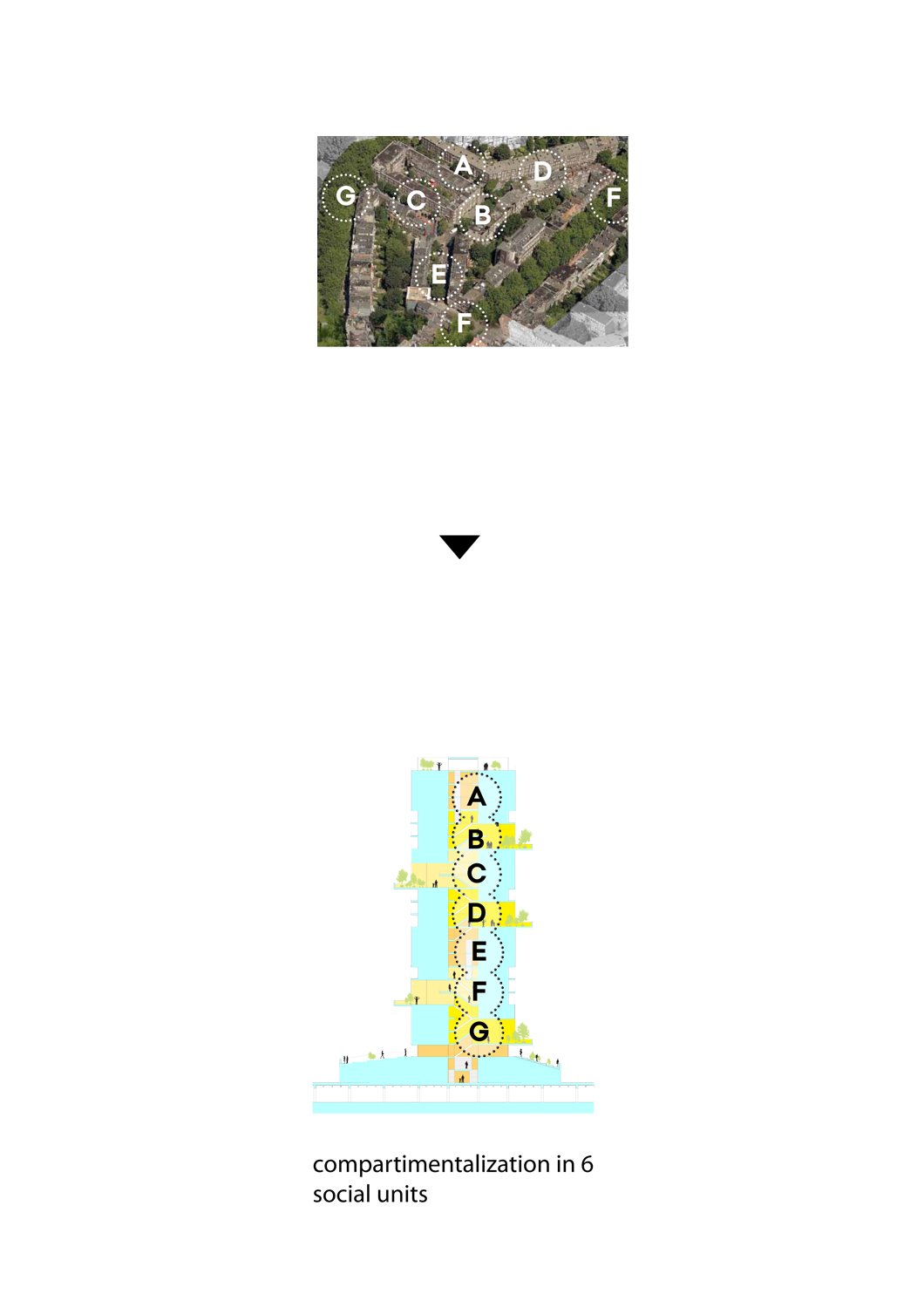 Rotterdam
The Netherlands
self initiated

Krill, Office for Resilient Cities and Architecture, was founded by Harmen van de Wal. The office approaches projects from one central vision: people must be able and free to interpret and use the built environment as they wish. The value of architecture is the use people make of it, and this use is never fixed. Architecture and cities must therefore be resilient, capable of accommodating changes, while keeping their essential socially sustainable and aesthetic characteristics. Krill therefore develops powerful architectural imagery, at the same time ordinary and surprising. Research is key to the development of Krill's work. Krill carries a strong believe in the hidden treasure of the existing context, be it social, architectural or in landscape. Architecture ranges from reconstruction to new build projects, from housing to offices and public facilities, and has been awarded and shortlisted in multiple occasions. Urban planning is approached from a transformational starting point.