The project area is located on the western outskirts of Bologna, in the industrial complex of the former Fonderie Sabiem next to the former Prati di Caprara barracks. The character of this portion of the city is determined by a number of old industrial facilities, some in a complete state of abandon. With the exception of several office buildings, the zone is perceived today as a lifeless place. It is in the immediate vicinity of the airport, near the expressway and several public parking lots not presently in use, since the area is deserted, but potentially very useful if activities of public interest are inserted in the buildings.
In 2013 Fondazione Golinelli decided to purchase part of the zone, an area of 9000 square meters containing an industrial building dating back to the 1960s, with the aim of renovating it and moving the foundation’s cultural and educational activities for people from 3 to 99 years of age into the new facility: the School of Ideas, Science in Practice, Educating to Educate, the Garden of Enterprise, Art Science and Knowledge, Science in the Piazza.
The goal of the project is clear: education on the scientific aspects of art and the artistic intuitions of science, bringing out the affinities of the two fields in a perspective of implementation of creative thinking. “What color is a Limit?” was the question raised, in order to try to understand how to think about the "threshold" as a system of transcendence. Architecture can mean the creation of borders, the drawing of a boundary: it has the characteristic of being able to host movement, to accentuate or erase differences. It can be rigid or elastic: the traces of life are gathered and dissolved on it; architecture permits microscopic interpretation of signs and, at the same time, comprehension of universal systems.
Opificio Golinelli is conceived as an urban metaphor in which all the activities take the form of ideal containers, icons of buildings in the urban fabric, like the City Hall, the School, the Daycare Center, the Construction Site, representing the ongoing work required by a city to live. Finally, the public space suitable to contain different activities, to sustain social interaction, where shared services and spaces are organized. A work of architecture with an intimate dimension, connected with study and work that take place inside ideal containers, with a relational approach, positioned in the space that connects the various activities.
This character of openness led to the design of a space with a local exterior, refurbishing an existing industrial building, and a global interior, interconnected with the world through open work modes, based on three generative principles intended to encourage and foster study and experimentation: the strategy of the unfinished, according to which the use of the entire area is not predetermined, permitting flexibility for temporary usage; the architectural paradox, which contrasts the vision of scientific study that permits enlargement of something infinitely small with a more conceptual vision, towards the sky, infinitely large; architectural synesthesia, making it possible to imagine space that can be ideal for study and research but also lend themselves to the display of art.
All this happens inside the existing industrial building, below the characteristic saw-tooth profile of the reticular roof structure, whose light underlines the public, open dimension of the internal space. 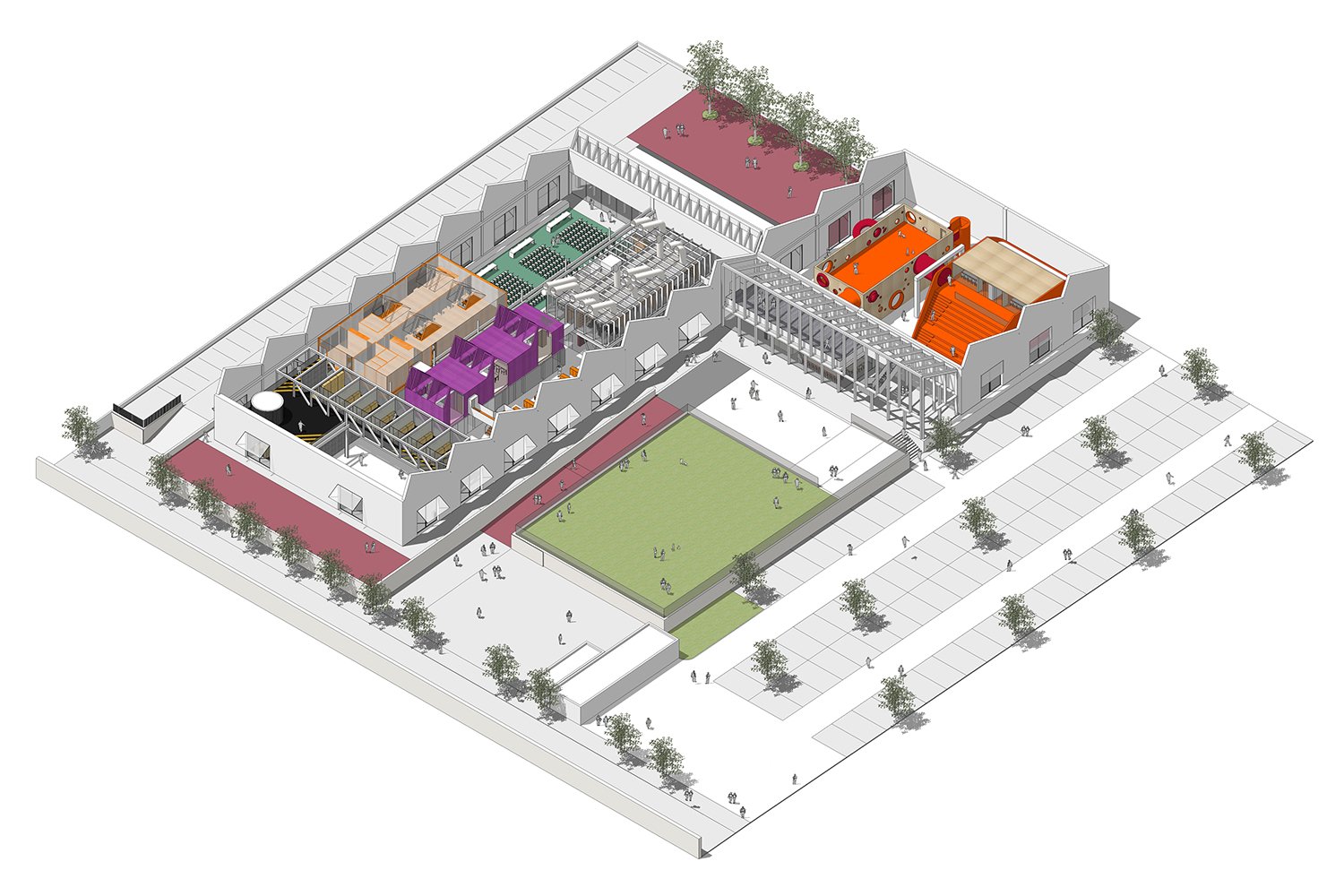